Queen Sonja Art Stable is located in the former Royal Stables. These buildings are part of the Palace that has not previously been open to the public.

The Royal Stables are worth a visit in their own right. Renovated for the opening of the Art Stable, the stables now appear as they did in their heyday - in the interwar years when King Haakon and Queen Maud kept their horses here.

The Dream of Norway

From 10 October 2019 until 26 January 2020 the exhibition "The Dream of Norway. King Haakon and Queen Maud in the Royal Collections" was on show in Queen Sonja Art Stable.

On 27 January the Art Stable closed for the mounting of a new exhibition, to open late in March. We will provide more information as soon as possible. 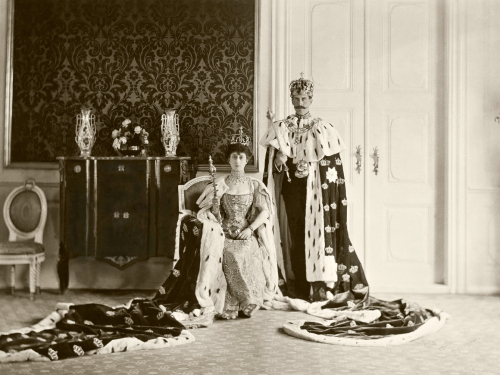 The coronation of King Haakon and Queen Maud in 1906. Photo: Peder O. Aune, the Royal Collections

The new exhibition will open i March 2020.

The Royal Stables were built between 1845 and 1848 according to designs from Palace architect H.D.F. Linstow. King Haakon and Queen Maud expanded the facilities in 1911. British-born Queen Maud was an accomplished equestrian, and the stables were remodelled based on those at Buckingham Palace, the Royal Mews. The expanded stables provided a number of new functions, including an equestrian arena with a spectator gallery and bandstand, a shoeing forge and infirmary stalls. 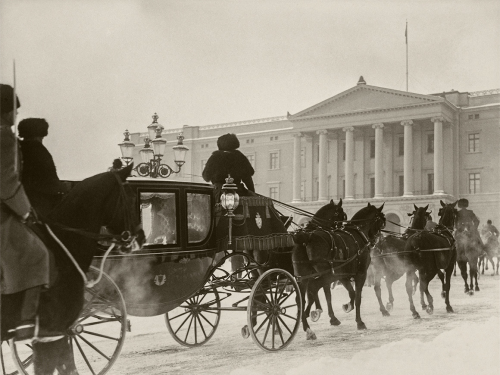 The coronation carriage returning to the Palace after a visit to the Storting, January 1932. The Royal Stables had room for 38 horses. Photographer: Carsten Sætren, The Royal Collections.

On Queen Maud’s initiative, a British stable master was hired. At one point, there was a staff of 13 grooms living in the accommodations above the centre stable building. The centre stable could house 38 horses as well as carriages, saddles and harnesses.

After Queen Maud’s death in 1938, the practice of keeping horses declined. The last horses were removed from the Royal Stables shortly after the outbreak of war in 1940. When the Royal Family returned to the Palace in 1945, it was by car. The era of the horse had ended.

The former stalls have been retained as part of the interior as the building was adapted to become the Art Stable. Photo: Jan Haug, The Royal Court.

The use of this venue was a gift to Her Majesty Queen Sonja from His Majesty The King. The Royal Stables had been used for storage since World War II. Now the building was to be converted into an arena for art and culture.

The Queen Sonja Art Stable officially opened on the Queen’s 80th birthday, 4 July 2017, and was opened to the public on 5 July.

The opening of the Queen Sonja Art Stable marks the beginning of a new era for the stables. Where the horses once stood in their stalls, the public can now enjoy art and history.

Our exhibition "The Dream of Norway" had it's last day 26 January. We are now closed for a period for the mounting of a new exhibition. The new exhibition will open late in March.

Tickets may be purchased at the door.
Prices are: 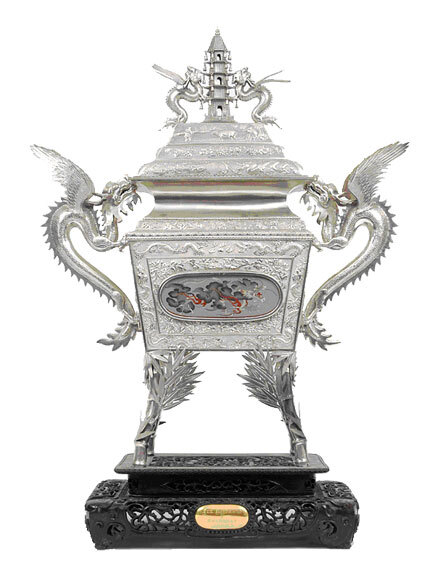 The urn was a gift forKing Haakon and Queen Maud on the occation of their coronation (Photo: Kjartan Hauglid, The Royal Court)
Links