The Crown Princess at the Frankfurt Book Fair

Norway has been selected as the Guest of Honour for 2019 at the Frankfurt Book Fair, the world’s most important trade fair for books. This project is the largest cultural promotion effort Norway has ever carried out abroad. Her Royal Highness The Crown Princess has taken on the role of ambassador for Norwegian literature in the international arena.

The initiative leading up to the Book Fair has resulted in hundreds of activities in the German-speaking areas throughout 2019, and will culminate with the Book Fair in Frankfurt from 16 to 20 October 2019.

Crown Princess Mette-Marit has been actively promoting literature and the joy of reading for many years, not least through the five “literary train” tours she has carried out in Norway.

“I cannot imagine a life without books. Ever since I was a child, I have been read to and given the opportunity to enter a world of fantasy. The act of reading, the internal images it creates, the emotions it evokes – has made me a better, wiser and more thoughtful person.
The Crown Princess, Bodø, 2014

The Crown Princess described her relationship to literature and libraries, and explained the purpose of the literary train tours, in her opening speech for the very first of these tours, in Bodø, 2014.

An English translation of the speech

This exhibition will offer viewers insight into two of Norway’s most famous artists by presenting Munch’s works as seen through the eyes of writer Karl Ove Knausgård. The exhibition will be shown at K20 – Kunstsammlung Nordrhein-Westfalen, and was developed in collaboration with the Munch Museum in Oslo. The Crown Prince and Crown Princess were in attendance when the Munch Museum’s exhibition “Towards the Forest – Knausgård on Munch” opened there in 2017.

The Munch Museum on their exhibition

The Crown Prince and Crown Princess with Karl Ove Knausgård at the opening of the exhibition “Towards the Forest – Knausgård on Munch”. Photo: Terje Bendiksby/NTB scanpix

On Saturday 12 October, at 13.15, the Crown Prince and Crown Princess will visit the book shop Pankebuch in Berlin. This small shop specialises in books from the Nordic and Baltic countries.

On Sunday 13 October, at 18.00, the Crown Princess will be a guest on the programme “Die Literaturagenten” at the long-established radio and TV station Rundfunk Berlin-Brandenburg in Berlin. The host, Thomas Böhm, will moderate a discussion of Norwegian literature based on the anthology Hjemlandet og andre fortellinger [The Homeland and other stories], which has been translated into German.

The participants in the panel discussion, in addition to the Crown Princess, will be co-editor Geir Gulliksen, authors Tomas Espedal and Helga Flatland, and artist Moddi. 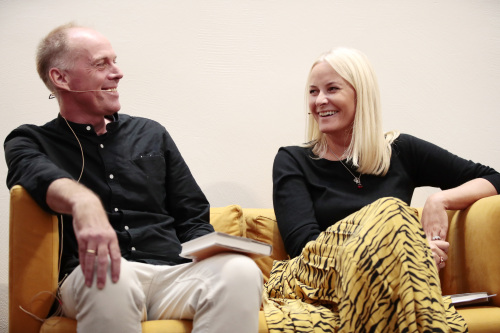 The Crown Princess and Geir Gulliksen were the co-editors of this anthology of literary fiction, which was compiled specifically for the Frankfurt Book Fair, and Norway’s status as Guest of Honour. Photo: Lise Åserud/NTB scanpix

On Monday 14 October the Crown Princess will embark on a literary train tour in Germany. In collaboration with the Norwegian Ministry of Foreign Affairs, NORLA (Norwegian Literature Abroad) and Deutsche Bahn, an entire train filled with Norwegian literature and Norwegian authors will travel through Germany to promote an interest in reading and in Norwegian literature.

The first stage of the trip is from Berlin to Cologne, and the main theme is Norwegian literature for children and young people. Berlin schoolchildren will meet authors Maria Parr and Jostein Gaarder, who will read from their books, and they can participate in a drawing workshop under the leadership of illustrators Anna Fiske and Svein Nyhus.

When the train reaches Cologne a literary meeting will be held with the Norwegian authors Maja Lunde and Anne Sverdrup-Thygeson in the Ludwig book shop in Cologne. The discussion will focus on nature and the climate in literature.

On Tuesday 15 October the literary train tour will continue from Cologne to Frankfurt, arriving at Frankfurt Main Train Station with a large delegation of Norwegian authors well before the opening of the Book Fair. The Crown Princess will hold conversations with many of the writers while on board.

The Crown Prince and Crown Princess will arrive at the Frankfurt Book Fair at 17.00, when they will be welcomed by Juergen Boos, the President of the Book Fair, and Heinrich Riethmüller, chair of the German Publishers and Booksellers Association.

A large crowd is expected to attend the formal opening ceremony, where the Crown Princess will participate together with Norwegian Prime Minister Erna Solberg, authors Karl Ove Knausgård and Erika Fatland, and artist Elle Márjá Eira, among others.

After the opening of the book fair itself the Norwegian Minister of Culture and Equality, Trine Skei Grande, will hold the official opening speech for the Norwegian Guest of Honour Pavilion.

A wide selection of photographs, articles and speeches can be found that describe the literary train project and the Crown Princess’ enthusiasm for books and reading.

We have compiled a separate photo album of photographs related to the Crown Princess’s literary interest. We do not own the copyright to most of these photos, and can therefore not give permission for their use by third parties. Please contact the relevant sources (all of the photos have been credited in the captions) if you are interested in using them.

A separate page offers more information about the Crown Princess’ activities to promote literature. In the following links you can find articles about the various literary train tours.

Information page about The Crown Princess and Literature

The Crown Princess has held many speeches, both during the literary train tours and in other contexts, where she addresses various aspects of literature and her own relationship to it.

“For me, this is the gift of literature: that it transports me both outwards and inwards, that it leads me to reach higher and wider, and that it enables me to gain a better understanding of both myself and others.”
The Crown Princess, 2014

“When we read, we belong to the community of readers. I think that’s a lovely idea – that we are a community of individuals sitting quietly, each on his or her own, and are in a book. That people on every continent, who have lived in different centuries, under widely different living conditions, have read the same book and experienced something – which is unique for each person, because the narratives touch on each reader’s life experiences in an individual way. That is a wonderful thing.”
The Crown Princess, 2015 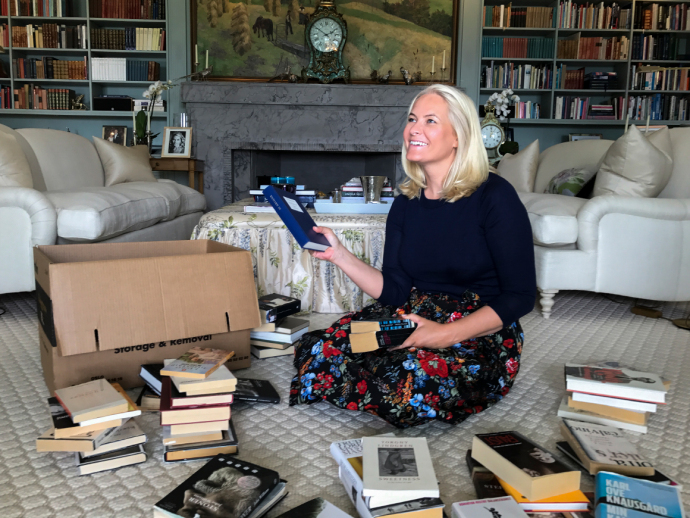 The Crown Princess at home at Skaugum preparing for the literary train tour 2018. Photo: Christian Lagaard, The Royal Court
Facts