This year the by:Larm music festival marks its 20th anniversary. Their Royal Highnesses The Crown Prince and Crown Princess took part in several events and held a lunch for the music industry at their Skaugum Estate residence.

by:Larm has established itself as an important festival and music conference for Norway and internationally. Activities include seminars during the day and concerts at night. The concerts give new, less well-known bands a popular arena to showcase their talents.

When by:Larm makes its noise in the city of Oslo, the world pricks up its ears. (Crown Prince Haakon)

by:Larm takes place on several different stages and locations in Oslo, from 2‒4 March this year.

In the days preceding and during the by:Larm festival, the by:Songs songwriters’ camp is being held at Tanken Studios in Sandvika and Whiteroom Studios in Asker. This is the third time the camp is being offered. When the Crown Prince arrived at Tanken Studios on Thursday, musical activities were in full swing throughout the facility. Here, skilled Norwegian and international singers and songwriters meet over several days of creative interaction. The new songs created are destined for Norwegian performers and international albums. 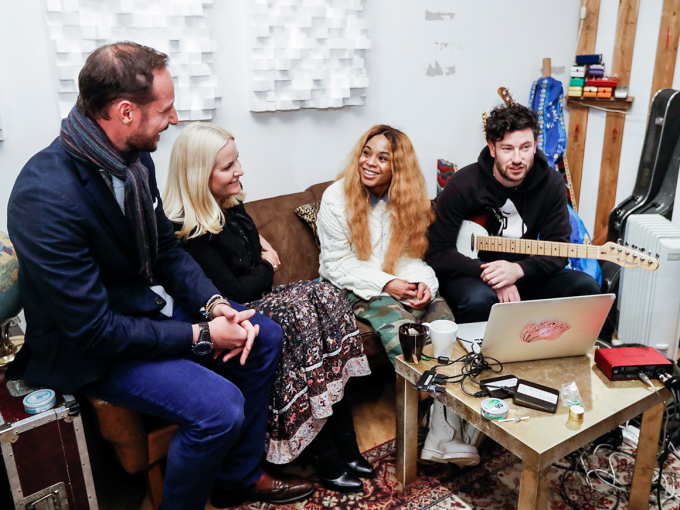 At the by:Songs camp, the Crown Prince and Crown Princess had the chance to meet musical performers and songwriters at work. Among the Norwegian participants are Ina Wroldsen and Andreas Schuller (Axident). Ms Wroldsen has collaborated on hits for celebrated performers such as Calvin Harris, Clean Bandit, Britney Spears and One Direction, while Mr Schuller has a BRIT Award for his work with Little Mix and a Grammy nomination with Justin Bieber.

Other well-known international songwriters on hand at by:Songs include:

The by:Songs camp is a cooperative effort between by:Larm, Music Norway, Whiteroom, Toothfairy and Tanken.

Thursday the Crown Prince and Crown Princess and Music Norway invited industry professionals to Skaugum Estate for a networking lunch.

The topics were opportunities for Norwegian music in today’s market and recruitment of new talent. Profiled individuals from around the world took part in order to meet actors from Norwegian and Nordic record labels and management firms.

Tim Blacksmith of Stargate management in Los Angeles was specially invited to Skaugum Estate to present a new Music Norway grant to a promising manager looking to launch international singing careers and whose actions inspire others to act. 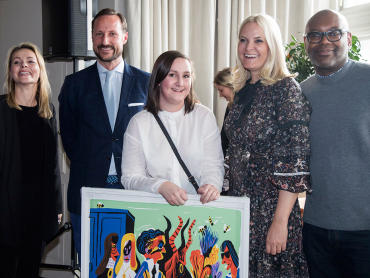 Tim Blacksmith presented the managing talent prize at Skaugum Estate. The prize is a collaboration between Blacksmith, Music Norway and the family of Per Eirik Johansen. Photo: Heiko Junge/NTB Scanpix.

Candidates for the prize were nominated by Norway’s music organisations, and the winner was Karen Norbakk of Mandelbaum Management. The grant honours the memory of Norwegian manager Per Eirik Johansen and is to be used to explore and take advantage of international opportunities for the manager and the musical performers he or she represents.

In the afternoon, Crown Prince Haakon took part in a celebration of the by:Larm festival’s anniversary at Dansens Hus, Norway’s national stage for dance. The Crown Prince gave a speech at the event, and he and the other guests were guided through a look back at the Norwegian and Nordic music industry’s past 20 years.

The Nordic album of the year was also announced. The Crown Prince had the honour of presenting the Phonofile Nordic Music Prize to Jenny Hval for her album Blood Bitch. The judges, comprising music journalists and other experts from Norway, Iceland, Sweden, Denmark and Finland, had selected the following 12 nominees: