Today Her Majesty The Queen attended the opening of the new Centre de Création Contemporaine Olivier Debré in Tours, France. The opening exhibition has strong ties to Norway.

The Centre de Création Contemporaine centre for contemporary art was established in 1984. In 2008, the centre received a gift of the works of French artist Olivier Debré, who had a deep affinity for the Loire River, which runs through Tours. Thus the art centre expanded its platform to present Mr Debré’s body of work.

Today Queen Sonja attended the opening of the new gallery building that bears Olivier Debré’s name. She was accompanied by the President of France, François Hollande, who is the patron of the exhibition. Several French government ministers were also in attendance.

This exhibition offers a unique opportunity for displaying Norwegian art in France. This is a milestone for artistic dialogue and cooperation between France and Norway, said Queen Sonja in her opening remarks.

The exhibition has garnered great interest in France. More than 100 cultural journalists attended the press viewing yesterday. The featured Norwegian artists had not expected the exhibition to attract such a wide press audience, and were looking forward to showing their works to the distinguished guests today.

Olivier Debré: a journey in Norway

Olivier Debré (1920–1999) was an important representative of the School of Paris – an art movement that inspired Norwegian artists Jakob Weidemann and Inger Sitter, among others. He is considered instrumental in the renewal of landscape painting, interpreting landscapes in an abstract manner.

The exhibition entitled “Olivier Debré: Un voyage en Norvège” [A journey in Norway] is one of several exhibitions mounted for the opening, and presents works inspired by the artist’s travels in Norway. He first visited the country in 1966, and returned several times. His visits culminated in a number of paintings featuring motifs from Norwegian nature.

Many of the works now on display are on loan from Norwegian collections, including Queen Sonja’s own. The Queen met Mr Debré on several occasions, and has a close connection to his art.

I live with Debré every day; a number of his works are hanging in the Royal residences, said the Queen.

One of the works on display at the exhibition, entitled “Lysne bleu taches bleues foncés”, was a gift given by the Queen to His Majesty The King many years ago.

- Debré masterfully captures the light of Lærdal in Western Norway in the painting. It positively vibrates in its blue tranquillity. When the King saw the painting, he exclaimed, ‘I know exactly where he stood and painted it!’.
- Debré’s art is abstract – yet at the same time recognisable.

Visitors to the centre can also become acquainted with Norwegian contemporary artists. The “nave” of the gallery building – La Nef – houses Per Barclay’s “Chambre d’huile” [Oil room]. It is one of the artist’s largest oil installations ever to be displayed.

The group exhibition “Innland” [Inland area] is situated in La Galerie Noire and features the works of young Norwegian contemporary artists. The black walls of this gallery are ideal for displaying the works of artists who express themselves in digital and video media.

Outside the main entrance of the building, visitors can experience the sound installation entitled “Tours Voices” of AK Dolven. The work comprises an audio recording of 20 women from Tours. 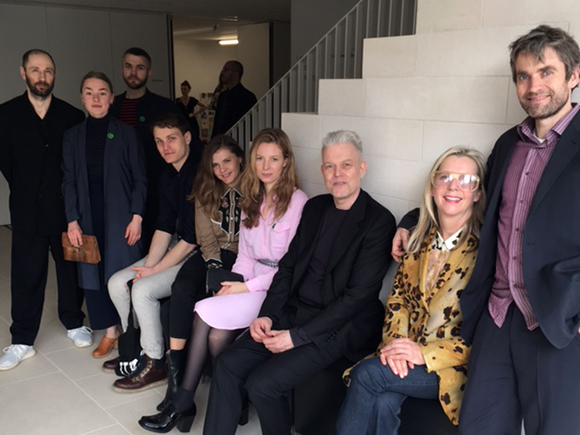 The Centre de Création Contemporaine has collaborated with Per Barclay and AK Dolven for many years, paving the way for this wide-ranging presentation of Norwegian contemporary art. The new gallery will open to the public on 11 March.