The Sagas are an important part of both Icelandic and Norwegian cultural heritage. Today the Icelandic Minister for Foreign Affairs presented Norwegian public libraries with a remarkable gift.

Research, start-up companies and the literature of the sagas were all on the programme for the second day of the State Visit of His Excellency President Guðni Th. Jóhannesson of Iceland and his wife Ms Eliza Reid. The day began at Oslo Science Park.

Their Majesties King Harald and Queen Sonja, President Jóhannesson and Ms Reid started the day’s programme at Oslo Science Park. The park brings together science, education and business for mutual benefit. Some 240 companies, research groups and institutes are located here, one of which is StartupLab. 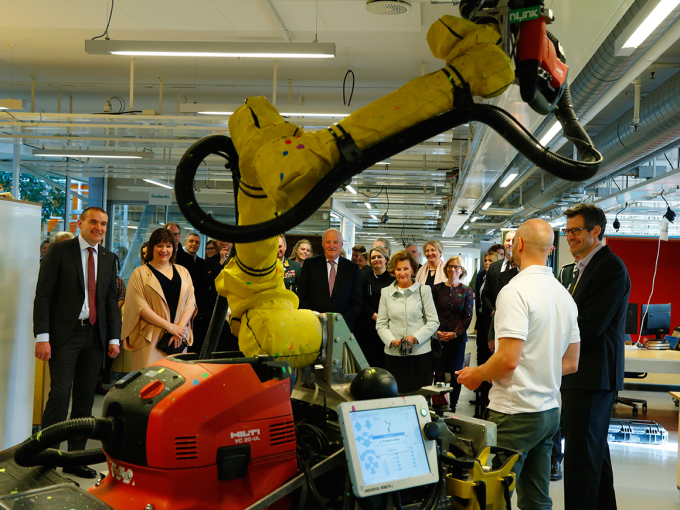 On a tour of StartupLab. Photo: Heiko Junge / NTB scanpix

StartupLab is headed by Icelandic Lauga Óskarsdóttir, who gave a presentation of the lab’s activities. The guests were also given a guided tour of the lab and were introduced to several projects as well as a number of Icelandic students and a drilling robot.

Gift of the sagas

Following the visit to Oslo Science Park, Director General Aslak Sira Myhre welcomed the President and First Lady of Iceland and the King and Queen to the National Library of Norway. The Sagas of Icelanders were the focus of the visit.

In 2014, Saga Publishing House in Reykjavik issued the first complete compilation of the Sagas of Icelanders in Norwegian, Swedish and Danish. King Harald wrote the preface for the Norwegian edition. Today, Minister for Foreign Affairs Guðlaugur Þór Þórðarson presented a remarkable gift on behalf of Iceland: 500 copies of the five-volume work. All the public libraries in Norway will receive one copy, and libraries with many young users will receive two. 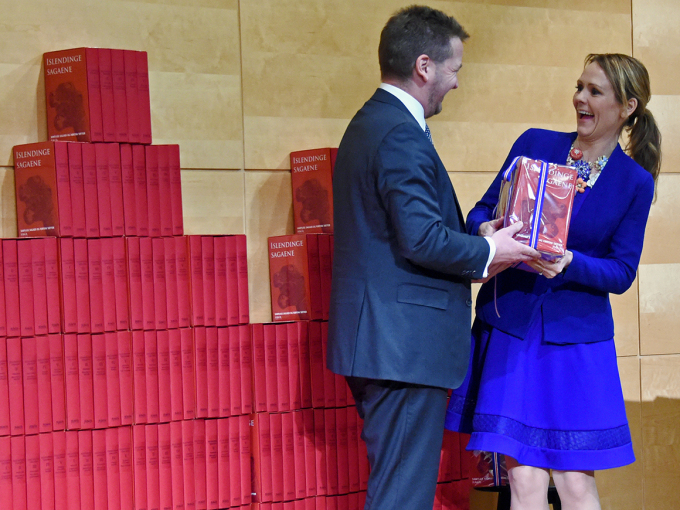 The President and First Lady and the King and Queen had the opportunity to view some special treasures from the National Library of Norway’s collection which were exhibited for the occasion. In the first display case was Norske Kongers Krønicke oc bedrifft: indtil unge Kong Haagens tid, som døde Anno Domini 1263, a book that chronicles the accomplishments of the Norwegian kings through Haakon IV, who died in 1263. The book is an abridged selection of Kings’ sagas. It was translated from Old Norse to Danish in 1540 and is probably the first printed book to contain a Norse saga. 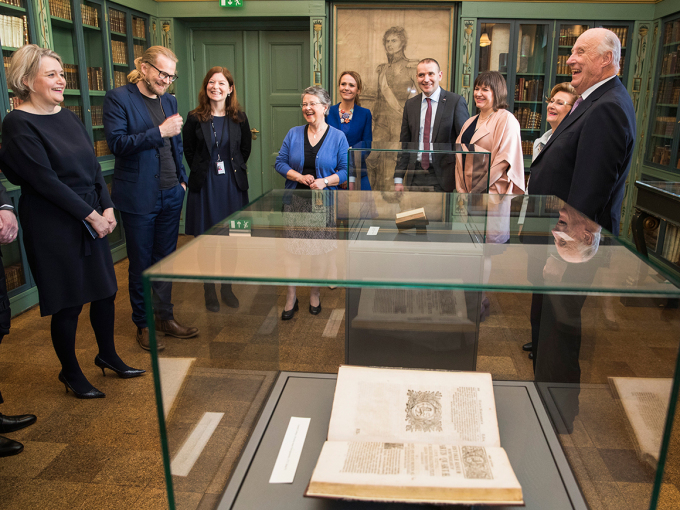 Some of the treasures of the National Library were exhibited for the occasion. Photo: Håkon Mosvold Larsen / NTB scanpix

The guests also had a chance to view the 1899 edition of the Sagas of the Viking Kings of Norway by Snorre Sturlason, which is renowned for its illustrations and recognised as one of the most important works within Norwegian book art.

President Jóhannesson met with Prime Minister Erna Solberg prior to the luncheon hosted by the Norwegian Government in honour of the President and First Lady. King Harald, Queen Sonja, Crown Prince Haakon and Crown Princess Mette-Marit were among the guests at the luncheon, which was held at Akershus Castle. 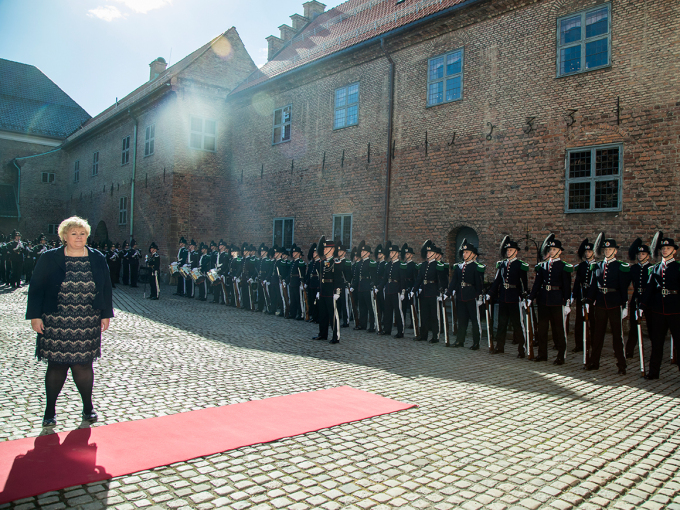 In the late afternoon, the Icelandic president and his wife are hosting a reception at the Astrup Fearnley Museum, where the King and Queen, Crown Prince and Crown Princess, and Princess Astrid, Mrs Ferner will be among their guests.

This evening, President Jóhannesson and Ms Reid will travel to Bergen for the final day of the State Visit. King Harald will accompany the President and First Lady during their programme, which will include visits to the Bergen Science Centre, the Norwegian Ocean Laboratory and the University of Bergen.