Opened one of the world’s steepest cable cars

Her Majesty The Queen undertook the official opening of Loen Skylift in Nordfjord today. The cable car will convey tourists from the fjord to the top of Mt Hoven (1 011 m) in just five minutes.

“Absolutely fantastic. What a wonderful treat. I am so pleased I had the chance to experience this. I am a bit afraid of heights, but it went very well,” said Queen Sonja after the spectacular trip, which offers views of some of the best Norway has to offer: dramatic landscape with steep hillsides, lush nature, sparkling fjords and snow-capped mountains.

“This is one of the most magnificent parts of our country.”

The cable car Hugin sweeps passengers quickly aloft to the top of the mountain and the new restaurant located above the treeline. With an upward gradient of 60 degrees at the steepest, Loen Skylift is one of the steepest cable cars in the world.

More tourists to Loen and Nordfjord

While Loen is already a popular destination, the hope is that the spectacular new attraction will bring even more tourists to Loen and Stryn.

The cable car opens up a vast mountain area for a new audience to explore on foot or on skis.

“It is marvellous that more people will get to enjoy this view,” said the Queen at a press conference at the top of the mountain. When asked whether she has any new hiking trips planned using the cable car, she responded somewhat secretively, “Perhaps – possibly”.

The local community has been deeply involved in realising the project, which had an overall cost of NOK 280 million.

“I think this will be very important for the ability to enjoy the mountains in the area, as well as for the entire region, for Western Norway and for Norway as a whole. It is fantastic that they have realised this dream, this vision of building a skylift so that a wider number of people can share in the experience that many of us have been so privileged to have,” said the Queen in conversation with compère Arne Hjeltnes on the rooftop terrace of the new Hoven Restaurant.

The two spoke of the Queen’s many hiking trips in the mountains around Loen. Her first trip was to Oldeskaret peak in 1979.

“This is one of the most magnificent parts of our country, with such unique nature and tremendous variation,” said the Queen.

The formal opening ceremony for Loen Skylift took place at the fjord station in brilliant sunshine with hundreds of people present attendance. There were musical performances by the band Indigo Child and pupils from Loen school, and the Mayor of Stryn, Mr Sven Flo, gave an enthusiastic speech.

At the top of the mountain, the Queen unveiled a five-metre-high horseshoe. Hoven (or “hoof”) mountain is named for Sleipner, the steed of the god Odin in Norse mythology. It is said that Sleipner kicked one of his hooves into the mountain at Loen, leaving the characteristic hole.

The official opening was concluded with a lunch at the restaurant for 270 invited guests. There were many people who were thanked for their contributions. 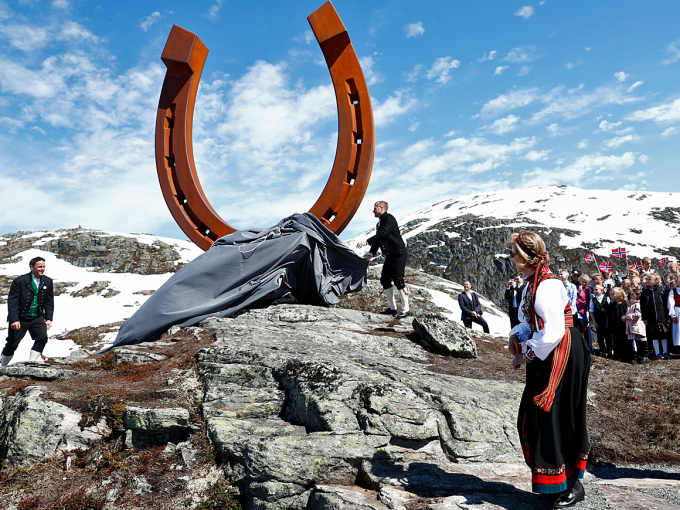