Today the 65th Bergen International Festival was officially opened. The theme this year is “Identity”, and Their Majesties The King and Queen were both in attendance at the opening ceremony in Torgallmenningen City Square.

This year’s festival asks the question, “Who are we – and who do we want to be – facing the arts, the unknown and ourselves?”.

Queen Sonja had the honour of giving the festival speech this year.
“Who am I?” the Queen asked.
“This question has united people since the dawn of time. It conjoins us across eras, borders, culture, religion, age, and gender. And this is the question so often posed by the arts – be it in music, visual art, literature, theatre, or dance.”

“Our lifelong duty as humans is to pursue the best within ourselves. What matters are our attempts at acting in accordance with what we believe to be fair and proper. Our courage to stand by who we truly are. Otherwise we will stumble through all that we encounter in life.”

The Queen also pointed out that she is attending the festival for the 31st time. The first time she attended the festival was in 1969, on her first official visit to Bergen as Crown Princess.

In keeping with tradition, Bergen Municipality, represented by the Mayor Marte Mjøs Persen, hosted a luncheon in honour of the opening of the Bergen International Festival. The chair of the festival board, Magne Furuholmen, gave a speech and musician Einar Selvik performed the piece “Ni mødre av sol” [Nine mothers of sun].

This evening King Harald and Queen Sonja will encounter a number of William Shakespeare’s renowned characters during the opening concert of the Bergen International Festival. In Shakespeare’s Sonnets, director Robert Wilson and composer Rufus Wainwright, together with the German theatre company the Berliner Ensemble, have created a piece of musical theatre based on 25 Shakespearean sonnets.

The piece presents a modern Shakespeare and the German cabaret artist Georgette Dee ties the different parts of the performance together. Rufus Wainwright’s music has elements of cabaret, and Kurt Weill was a major source of inspiration.

Two weeks of festivity and performances

This year’s festival runs from 24 May through 7 June and will feature a wide variety of music, theatre, dance and exhibitions. 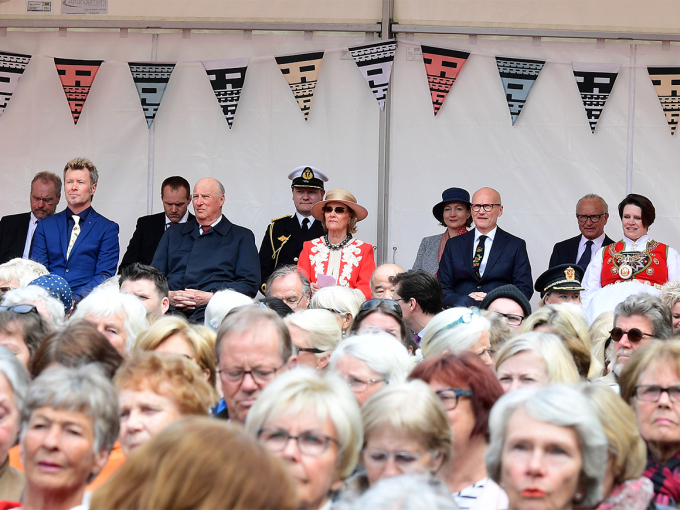 The King and Queen during the official opening of the Bergen International Festival 2017. Photo: Marit Hommedal / NTB scanpix

“In these next days, let us aspire to meet each other with the openness of art – and expose ourselves to human and artistic shock waves of the highest quality!” said Queen Sonja.

His Majesty King Harald is the patron of the Bergen International Festival.