Statue of the nature-loving Queen

A statue of Her Majesty The Queen was unveiled by her grandchildren in the Palace Park this morning. The statue embodies Queen Sonja’s deep love of hiking and the great outdoors.

The Queen is an avid hiker and there is scarcely a mountain range in Norway that she has not explored. His Royal Highness The Crown Prince stressed this in his thank you speech at the unveiling of the new statue today:

“In our family there is a story that repeats itself again and again. Let me use myself as an example. I arrive at a mountain cabin, let’s say one of the public DNT cabins, in the middle of nowhere, quite proud of myself for managing such a big trek, and I am greeted by cheerful hosts who say, ‘It’s so lovely to see you! Your mother was here a month ago.’”

The statue was sculpted by Kirsten Kokkin and is cast in bronze. It depicts Queen Sonja in her hiking clothes, taking a break with her rucksack by her side. The plinth of the statue is a piece of granite from Hedalen in the Valdres region.

Ms Kokkin describes the statue as follows:
“Her Majesty Queen Sonja of Norway is seated, looking up at the Royal Palace, at her calling. She has placed the rucksack she carries by her side. She has scaled yet another mountain, overcome yet another challenge, and is deep in contemplation with her thoughts criss-crossing Norway’s heights.” 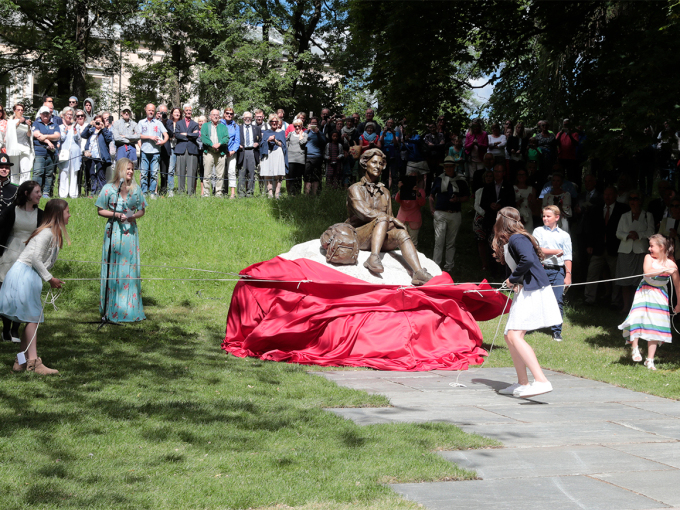 The statue was a gift from the Norwegian Trekking Association (DNT) in honour of the Queen’s 80th birthday. The Queen has been a patron of the organisation for many years, and has used many of their cabins and hiking trails throughout the country.

Crown Prince Haakon pointed out that the statue is also a source of inspiration:

"This statue will inspire us to spend more time outdoors, even if it just a Sunday walk around Sognsvann lake or an afternoon stroll here in the park. Research shows that people who are physically active more often experience feelings of happiness and enthusiasm. In short, if you would like to be happy it helps to get up and out. And once you are on your way, remember to take time to rest and reflect. That is important as well."

Kirsten Kokkin also sculpted the statue of Crown Princess Märtha, which stands in the Palace Park as well. Ms Kokkin trained at the Royal Swedish Academy of Arts and lives in Colorado, USA.