The Art Stable is open

Today Her Majesty The Queen officially opened the Queen Sonja Art Stable, eight months after His Majesty The King surprised her with a birthday gift of the Royal Stables.

Queen Sonja began her speech today by exclaiming “The day has finally arrived!”
The pace of activity leading up to the opening has been hectic, and the Queen admitted that she had not been certain everything would be ready in time for the opening today, her 80th birthday.

“This has been an intensive process, and the results have far exceeded my wildest expectations! Just look for yourselves! Isn’t it impressive? That they could transform stables into something like this?

King Harald surprised the Queen by giving her the Royal Stables with the intention of transforming them into the Queen Sonja Art Stable. Today that plan has come to fruition. 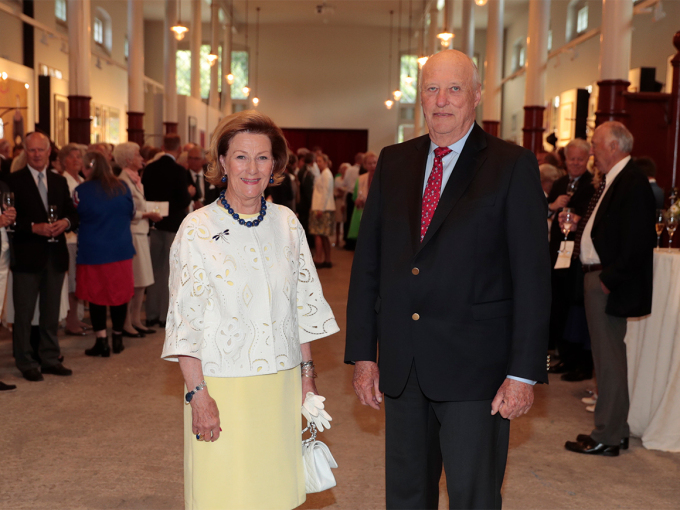 The King and Queen welcoming their guests to the opening of the Queen Sonja Art Stable. Photo: Lise Åserud, NTB scanpix.

There were, however, several gifts within the gift. Before the Queen took the podium for the official opening, two key givers presented their gifts.

The Norwegian Government’s gift to Queen Sonja in honour of her 80th birthday is a photo installation featuring photographs with Queen Maud both in front of and behind the camera. Prime Minister Erna Solberg presented the gift today, welcoming Queen Maud back to the stables that she had helped to fashion and loved so deeply.

A glimpse from the installation: each “chapter” is opened with one of Queen Maud’s ensembles. Reproduced with the permission of the National Museum.

Queen Maud was both a keen equestrian and an enthusiastic photographer – with the latter being an interest shared by Queen Sonja as well. The installation was created by the National Museum of Art, Architecture and Design in collaboration with the Royal collections and Tellart.

The other major gift that visitors to the Art Stable will be able to enjoy is the extensive collection of graphic prints that make up the opening exhibition. 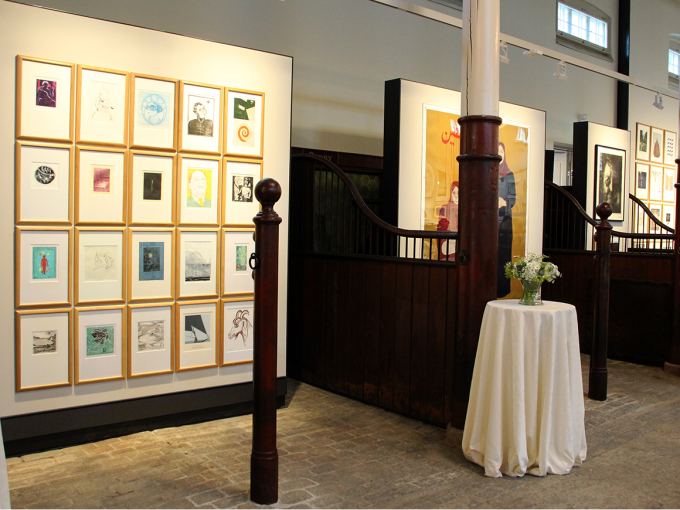 All 164 graphic prints in the gift to the Queen are on display in the opening exhibition. Photo: Liv Osmundsen, The Royal Court

The chair of the board of the Association of Norwegian Printmakers, Magne Vangsnes, presented the gift “from all of us who love the smell of ink”. Norwegian graphic artists have given these works in appreciation of the Queen’s efforts on behalf of Norwegian art in general and Norwegian graphic art in particular. Altogether 164 works have been donated, comprising a wide-ranging, diverse collection representing most printmaking techniques and types of graphic art.

A third important element of the exhibition is the stable building itself. The Royal Stables were upgraded between 1908 and 1911 modelled on the stables at Buckingham Palace and with the active involvement of Queen Maud. The interiors from that time have been restored and the horses’ stalls, each bearing the name of its former occupant, are an integral part of the gallery. All adaptations to transform the building into an art venue were made in consultation with the Directorate for Cultural Heritage.

The interiors from Queen Maud’s time are an important component of the Art Stable. Photo: Jan Haug, The Royal Court

The head of guided tour activities at the Royal Palace, Nina Høye, shared the history of the stables at the opening today.

A performance of a traditional Norwegian children’s song about a little foal – “Fola, fola blakken” – by singer Nils Bech concluded the opening of the Art Stable, and the guests made their way to the Palace Park for a picnic.

To find their seating, each guest drew a stone from a pile. The name of one of the many mountains the Queen has climbed was written on each stone, and each mountain comprised a table.

The festivities will continue this evening for family and friends at Bygdø Royal Farm.