The Queen is the patron of UWC Red Cross Nordic in Fjaler municipality and has followed the college closely since it was launched in 1995.

UWC is a global education movement that brings together young people from over 100 countries at 17 upper-secondary schools around the world. The Nordic college is idyllically situated at the end of a fjord in Fjaler municipality in Sogn og Fjordane county.

Art and stories around the bonfire

Queen Sonja was given a guided tour of the area to see the various educational projects devoted to promoting inclusion.

Mean Pring of Cambodia and Rodrigo Freitas of Portugal accompanied the Queen on a tour of the art exhibition in the Naustet boathouse. In a simple turf hut, children were sharing stories around the bonfire. The children are patients at Haugland Rehabilitation Centre, which lies in close proximity to the college. 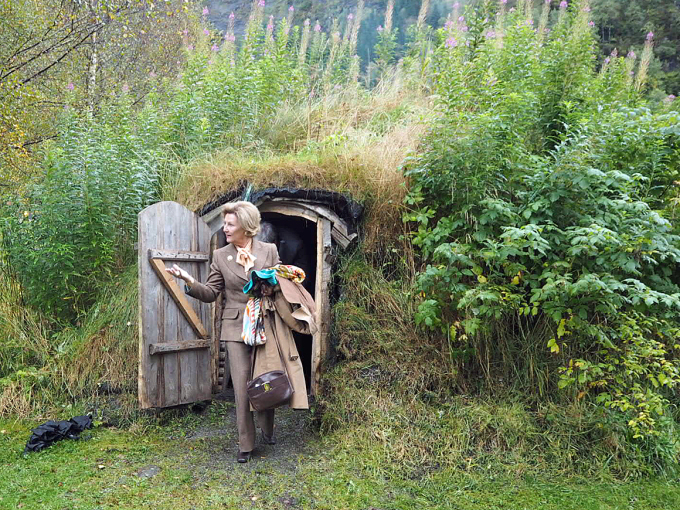 The Queen exits a turf hut after speaking with children around the bonfire. Photo: Liv Anette Luane, The Royal Court

During the tour, the Queen stopped at an obstacle course and equipment storage shed for people with disabilities, an enclosed area for ball games, and a bakery building under construction.

Culture from every corner of the globe

The evening was concluded with dinner and a fabulous cultural programme in the auditorium. The programme featured an impressive 13 performances, ranging from traditional Norwegian folkdance and classical piano to a reading of Chinese poetry and Georgian folksongs – all performed by the pupils.

Pupil Vicky Aposolou of Greece presented a picture and a birthday card to the Queen, who celebrated her 80th birthday earlier this year.

The programme will continue with a visit to the rehabilitation centre for a presentation of its development plans.

The Queen will also meet five pupils from Iraq, Cambodia, Thailand, Nepal and Western Sahara, respectively, at the Snikkerbua, a former carpentry workshop. These pupils began at the college one year earlier than the rest because their studies in their home countries had been interrupted due to war, conflict and other factors.