The 162nd Storting is open

Today, His Majesty The King opened the 162nd Norwegian Storting (Parliament). The ceremony took place according to tradition, and as stipulated in Article 74 of the Constitution.

"I greet the Storting and welcome you to responsible labour, wishing it will be to the good of the Nation." This is the traditional wording that begins the Speech from the Throne.

This is ordinarily the only time during the year The King visits the Storting, and the only time that King, Government, Storting and Supreme Court is gathered.

The speech from the throne

The ceremony is constituted by two important elements: the Speech from the Throne and the Report on the State of the Realm. The Speech from the Throne is given by His Majesty and presents the main features of the Government’s policies for the coming year. The speech is written by representatives of the Government, not by the King. Tomorrow, the Storting will deliberate on core issues from the speech, as no deliberations may take place in the presence of the King.

The Speech from the Throne is followed by the Report on the State of the Realm. Traditionally read by the youngest member of the Government, the report presents a summary of what the Government has achieved during the past year. 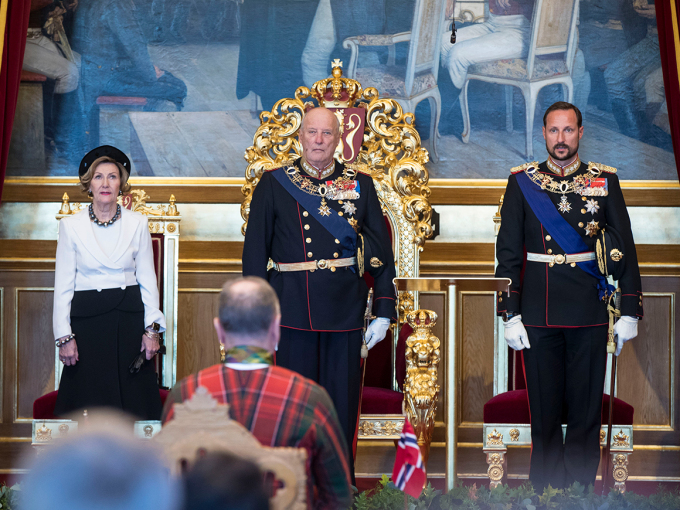 Her Majesty The Queen and His Royal Highness Crown PRince Haakon accompanied King Harald at the ceremony.

The ceremony is stipulated in Article 74 of the Constitution:

As soon as the Storting is constituted, the King, or whoever he appoints for the purpose, shall open its proceedings with a Speech, in which he shall inform it of the state of the Realm and of the issues to which he particularly desires to call the attention of the Storting. No deliberations may take place in the presence of the King.