A dark day in Norwegian history

On 26 November 1942, the Donau left the quay in Oslo with 529 Jews from Norway on board. On Sunday evening, Her Royal Highness Crown Princess Mette-Marit was in attendance in the Aula of the University of Oslo at the ceremony commemorating the 75th anniversary of the deportation.

The Jews deported on the Donau arrived first in Stettin. From there they were transported by train to the Auschwitz-Birkenau concentration and extermination camp.

The deportees were children, women and men of all ages. The oldest was 81 years old. The youngest was just an infant. Only nine returned.

This deportation was the largest of the five organised deportations of Jews from Norway by ship.

Two who were there described their escapes

The 75th anniversary of that bleak day was commemorated in a ceremony in the University Aula.

Gerd Golombek and Leif Grusd, both of whom miraculously managed to avoid deportation, were there to tell their stories. Seventy-five years ago both were 12 years old. In a conversation with Director of the Center for Studies of the Holocaust and Religious Minorities, Guri Hjeltnes, they each described their escape to Sweden. 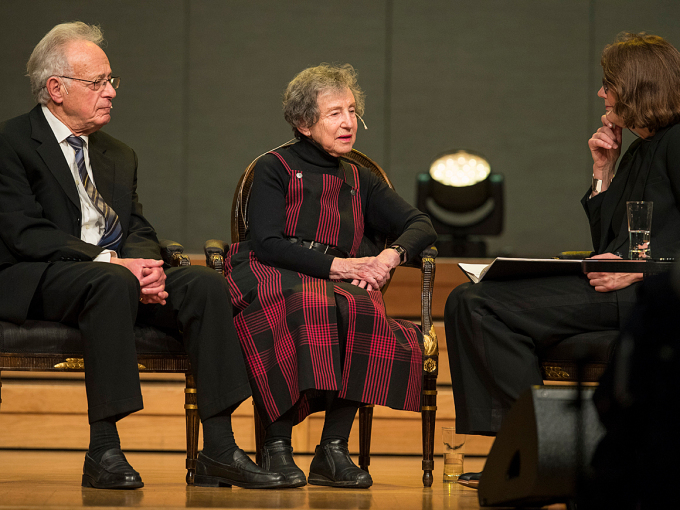 When asked why it is important to mark this day, Leif Grusd replied, “We must never forget what happened, and this is a good way of remembering those who were lost. I also think it is important that all the stories of how people escaped are brought forth. This is a way we can thank those who risked their lives again and again.”

Historian Bjarte Bruland, who has researched the deportation of the Norwegian Jews during the Second World War, spoke about the history at the ceremony.

“Nazism represents the deepest pit into which humankind can fall – contempt, hate and fear targeted towards other people. History rarely repeats itself, but there will always be traces of the past in our present,” said Dr Bruland, who concluded his presentation with the following appeal:

“In our time, events flicker across our screens in a never-ending stream – often without explanation. To counteract this we must nurture critical thinking in the new generations. The events that occurred 75 years ago must not be swallowed up by the news stream. This is the only way that we can prevent new abuses and murders in the future.”

"In our time, events flicker across our screens in a never-ending stream – often without explanation. To counteract this we must nurture critical thinking in the new generations. The events that occurred 75 years ago must not be swallowed up by the news stream.

The event was organised by the Center for Studies of the Holocaust and Religious Minorities, together with the Jewish Community in Oslo and the Jewish Community in Trondheim. Speakers included Prime Minister Erna Solberg, and Rita Abrahamsen and Ervin Kohn from the communities in Trondheim and Oslo, respectively. Alexander Levi held an appeal to the audience, which was comprised of survivors of Nazi brutality, their descendants and other members of the general public who wished to remember the many who were lost. 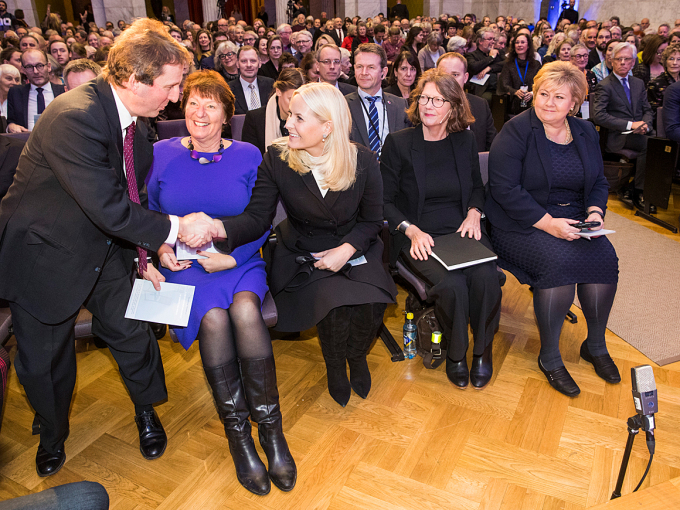 Crown Princess Mette-Marit meets Rolf Golombek, Chairman of the Board of Center for Studies of the Holocaust and Religious Minorities in Norway. Photo: Håkon Mosvold Larsen / NTB scanpix