The Nobel Peace Prize for 2017

The Nobel Peace Prize was presented in a formal ceremony at Oslo City Hall today. Their Majesties The King and Queen and Their Royal Highnesses The Crown Prince and Crown Princess were in attendance when the International Campaign to Abolish Nuclear Weapons (ICAN) received the award.

In its statement the Norwegian Nobel Committee said: “The organisation is receiving the award for its work to draw attention to the catastrophic humanitarian consequences of any use of nuclear weapons and for its ground-breaking efforts to achieve a treaty-based prohibition of such weapons.”

The organisation is receiving the award for its work to draw attention to the catastrophic humanitarian consequences of any use of nuclear weapons and for its ground-breaking efforts to achieve a treaty-based prohibition of such weapons.

In keeping with tradition, the formal award ceremony was held in the Central Hall of Oslo City Hall. The Chair of the Norwegian Nobel Committee, Berit Reiss-Andersen, presented the year’s Peace Prize Laureate and reiterated the committee’s decision for awarding the prize to the International Campaign to Abolish Nuclear Weapons (ICAN).

The decision states, among other things: “ICAN is a coalition of non-governmental organisations from around 100 different countries around the globe. The coalition has been a driving force in prevailing upon the world's nations to pledge to cooperate with all relevant stakeholders in efforts to stigmatise, prohibit and eliminate nuclear weapons. To date, 127 states have made such a commitment, known as the Humanitarian Pledge.

Furthermore, ICAN has been the leading civil society actor in the endeavour to achieve a prohibition of nuclear weapons under international law. On 7 July 2017, 122 of the UN member states adopted the Treaty on the Prohibition of Nuclear Weapons. As soon as the treaty has been ratified by 50 states, the ban on nuclear weapons will enter into force and will be binding under international law for all the countries that are party to the treaty.

The Norwegian Nobel Committee is aware that an international legal prohibition will not in itself eliminate a single nuclear weapon, and that so far neither the states that already have nuclear weapons nor their closest allies support the nuclear weapon ban treaty. The Committee wishes to emphasise that the next steps towards attaining a world free of nuclear weapons must involve the nuclear-armed states. This year’s Peace Prize is therefore also a call upon these states to initiate serious negotiations with a view to the gradual, balanced and carefully monitored elimination of the almost 15,000 nuclear weapons in the world.”

To see the full statement of the Norwegian Nobel Committee click on the link at right.

The Executive Director of ICAN, Beatrice Fihn, accepted the Nobel Peace Prize on behalf of the organisation. She was accompanied by Setsuko Thurlow, who survived the bombing of Hiroshima in 1945 when she was 13. Ms Thurlow has been a leading figure in ICAN since the campaign was established in 2007. 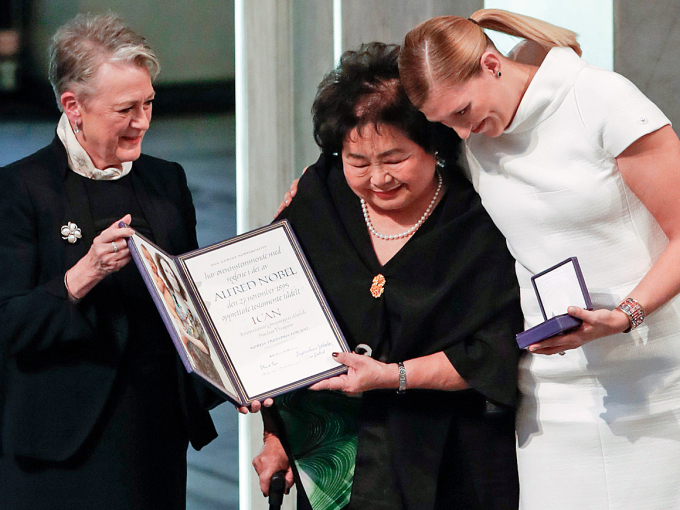 Following the presentation of the Nobel Peace Prize medal and diploma, the laureate gave the Nobel lecture – a moving appeal to all the nations of the world to prohibit nuclear weapons.

Two other survivors, Terumi Tanaka of Nagasaki and Toshiki Fujimori of Hiroshima, were also in attendance at the ceremony.

Earlier in the day, King Harald received Ms Fihn in an audience at the Royal Palace. She was accompanied by the Vice Chair of the Norwegian Nobel Committee, Henrik Syse. Queen Sonja, Crown Prince Haakon and Crown Princess Mette-Marit were also in attendance during the audience. 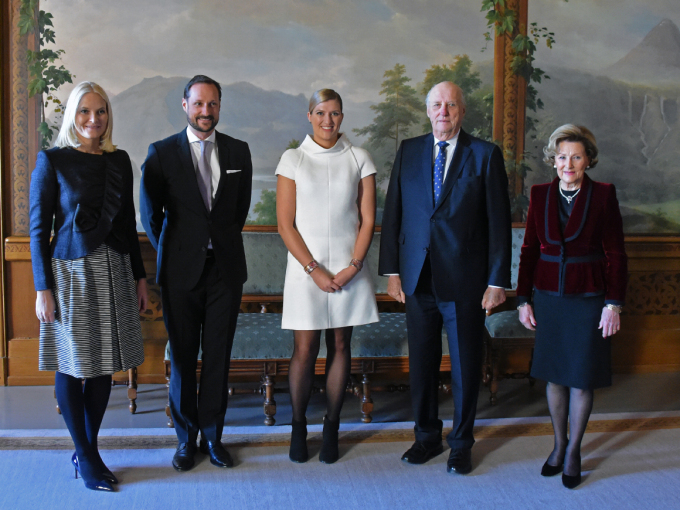 The Save the Children’s Peace Prize Party has been part of the official programme for the Nobel Peace Prize since 1997. The hour-long event at the Nobel Peace Center was organised by a committee made up of 12 seventh graders from Kampen, Vålerenga and Sagene primary schools. Several hundred children were in the audience, and guests included Crown Princess Mette-Marit, Princess Ingrid Alexandra and Prince Sverre Magnus.

Performances by well-known artists provided a musical framework for the conversation between the pupils and the Peace Prize Laureate, whom they interviewed on stage. Ms Fihn was also given a compendium of the children’s dreams, based on the message “don’t let our dreams go up in flames”, which was read aloud on stage.

The event was streamed to enable schoolchildren and others around the country to watch it live.

This evening, King Harald, Queen Sonja, Crown Prince Haakon and Crown Princess Mette-Marit will be attending the traditional Nobel Peace Prize banquet in honour of the laureate at the Grand Hotel in Oslo.

Tomorrow evening, the Crown Prince and Crown Princess will be attending the traditional Nobel Peace Prize Concert at Telenor Arena. The concert will be broadcast live by the Norwegian Broadcasting Corporation (NRK) and is a musical tribute to the year’s prize-winner featuring top artists from around the world.

Congratulations from His Majesty King Harald to the new President of the Republic of the Philippines, His Excellency Mr. Ferdinand Romualdez Marcos Jr.

The Crown Prince, the Crown Princess and Prince Sverre Magnus were among the many people who contributed to a sea of colourful flowers and rainbow flags outside the London Pub in Oslo on Saturday.