His Royal Highness The Crown Prince concluded his visit to the Olympic host city of PyeongChang today. It was a banner day for Norway, as the Norwegians competing in South Korea won three gold medals, two silvers and a bronze.

The day began on the alpine ski slope, where Norwegians Aksel Svindal and Kjetil Jansrud took the gold and silver medals, respectively, in the Men’s Downhill event.

Before the race, Crown Prince Haakon was outfitted with skis and a radio and accompanied the Norwegian trainers and athletes on their inspection of the course.

While the Crown Prince was still celebrating the double victory with winners Svindal and Jansrud just past the finish line, Ragnhild Mowinckel followed up with a silver-medal performance in the Ladies’ Giant Slalom. She is Norway’s first female Olympic alpine medallist since 1936.

The Crown Prince then cheered on the Norwegians in the Ladies’ 10-km Free cross-country skiing event, as Ragnhild Haga won gold and Marit Bjørgen tied for the bronze. Sweden’s Charlotte Kalla took silver. 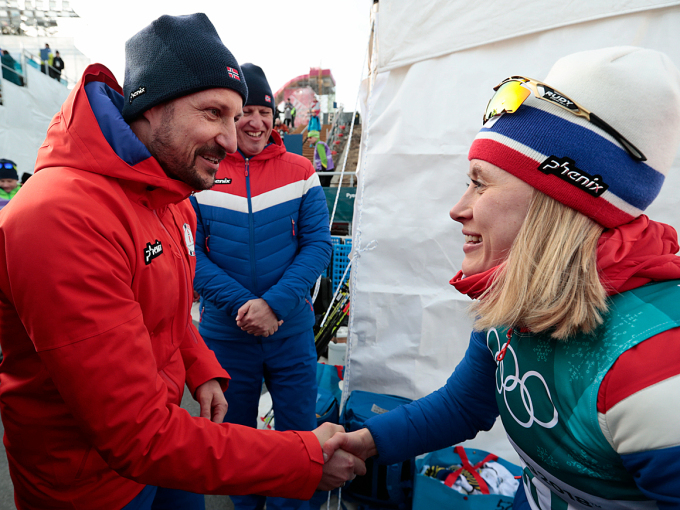 Norway’s successful day concluded with a gold medal by Johannes Thingnes Bø in the Men’s 20-km Individual biathlon. The Crown Prince witnessed this gold-medal performance from the stands. Never before has Norway won so many Olympic medals in a single day. 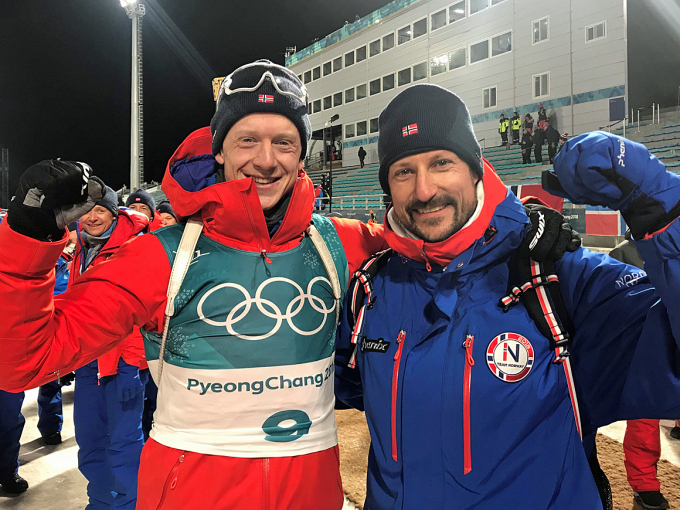 Earlier in the day, Crown Prince Haakon had the chance to view most of the Norwegian ice hockey team’s game against Sweden. Sweden won the game 4-0.

The Crown Prince had a busy programme during his three days in PyeongChang.

Later that day the Crown Prince met the Norwegian snowboarders. He was in the stands for the Norway-Japan curling match and for the Nordic Combined event (normal-hill ski jump + 10-km cross-country). He also had time for a chat and a waffle at the Norwegian Church Abroad in the Olympic village.