Today Her Majesty The Queen announced the launch of a cooperation between the Queen Sonja Print Award (QSPA) and the Hurtigruten cruise operator. The QSPA will curate the artworks to be displayed on the MS Roald Amundsen, a new ship to be launched next year.

Queen Sonja presented the cooperative effort at a reception on board Hurtigruten’s MS Fram, currently docked in New York:

“The unique partnership we are gathered here today to celebrate is the cooperation between Hurtigruten and The Queen Sonja Print Award. Hurtigruten strives to provide their guests with an unforgettable experience. Exquisite art to enjoy on the journey is part of this experience.“

In addition to its traditional coastal voyages along the Norwegian coast, Hurtigruten operates a number of expedition ships that take guests on explorer voyages in different parts of the world. The next addition to the fleet will be the MS Roald Amundsen, named for the famous Norwegian polar explorer, and the ship will be exploring destinations such as Antarctica, the Arctic and the Norwegian coast. MS Roald Amundsen will be completed in 2019 as the word’s first hybrid-powered expedition ship with the ability to sail fully on electrical power. The ship’s interior design will feature Scandinavian natural materials – and Norwegian graphic art. 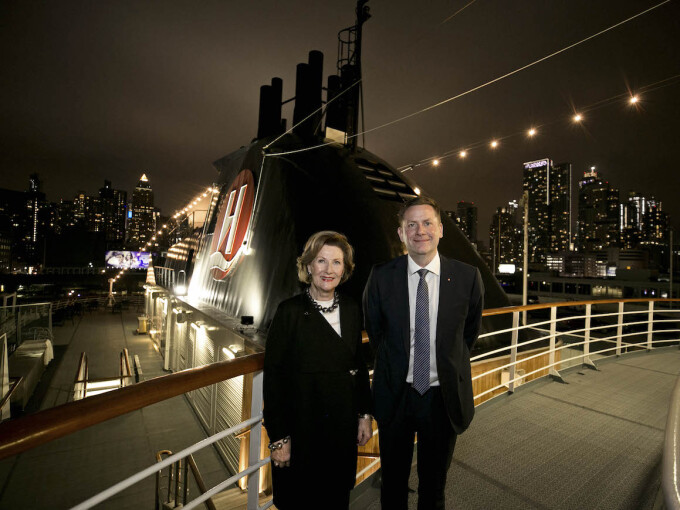 A ship of graphic art

On board the MS Roald Amundsen, an international public will be able to view graphic prints by emerging Norwegian artists along with works of previous winners of the Queen Sonja Print Award and some of the Queen’s own works as well. Almost 600 artworks will be on display in cabins and public areas. Approximately 20 different artists and a variety of different printmaking techniques will be represented.

The Queen drew a line back to early Viking history when she presented the plans for the new ship that would carry so much Norwegian art:

“The Viking ships were decorated with the most beautiful wooden carvings: Dragon heads and flowers, ornaments and animals adorned Leiv Eiriksson’s ship – as he fought his way through the waves towards Newfoundland, where he first set foot. Today, a 1000 years later – we continue the tradition – and decorate a proud ship – sailing on our oceans on a much more peaceful mission than back in the early Viking age!

Some of Her Majesty's own works will be among those decorating the MS Roald Amundsen. Photo: Pontus Höök, Hurtigruten

The event on Sunday included a small exhibition of works by some of the selected artists. One of these, Julie Ebbing, recipient of the Kjell Nupen Memorial Grant in 2017, was present at the reception.

Julie Ebbing is one of the artist selected. She was in attendance at the launch this Sunday, where Qeen Sonja and Hurtigruten CEO Daniel Skjeldam presented the partnership. Photo: Pontus Höök, Hurtigruten