The King presented the Kavli Prizes

His Majesty King Harald presented the 2018 Kavli Prizes at the Oslo Concert Hall this afternoon. The Kavli Prizes recognise scientists for their seminal advances in three research areas: astrophysics, nanoscience and neuroscience.

The prizewinners “represent truly pioneering science that… will benefit humanity in a profound way.” The award ceremony was held at Oslo Concert Hall, and hosted by actors Alan Alda and Heidi Ruud Ellingsen.

This year’s Laureates are seven eminent scientists whose work includes: studies of molecules in interstellar clouds, where stars and planets form; of the development of tools to precisely edit DNA; and of the molecular and neural mechanisms of human hearing. 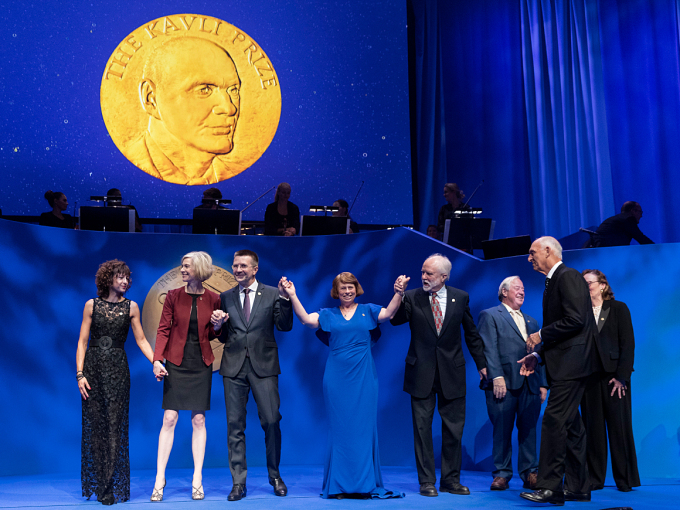 The winner of the Prize in Astrophysics was Ewine van Dishoeck of the Netherlands.

The Prize in Nanoscience was shared by Emmanuelle Charpentier (France), Jennifer A. Doudna (USA) and Virginijus Šikšnys (Lithuania). Musical entertainment during the ceremony was provided by Eldbjørg Hemsing, Håvard Gimse, Solveig Slettahjell & the Mosaic choir and Adam Douglas.

The Kavli Prize is a partnership between the Norwegian Academy of Science and Letters, the Kavli Foundation (USA) and the Norwegian Ministry of Education and Research. The prizes are presented every other year, and consist of a gold medal and a cash prize of USD 1 million for each field. First awarded in 2008, the Kavli Prize is bears the name of Fred Kavli, the Norwegian-American businessman and philanthropist who originally founded the prize.