Her Majesty The Queen presented the Queen Sonja Print Award 2018 to Emma Nishimura tonight. David Hockney received the Lifetime Achievement Award for his distinguished contribution to the art of printmaking.

The Award Ceremony took place at the Royal Academy of Arts in London tonight.

Forty-two artists were nominated for the 2018 Award by curators, museum directors and fellow artists from all over the world. The nominees reflect the breadth of contemporary printmaking today, ranging from traditional forms to new approaches involving installation, collage and performance.

Emma Nishimura (b.1982) lives and works in Toronto, Canada. Her work ranges from traditional etchings, archival pigment prints, drawings, and audio pieces to art installations. Her work is in public and private collections and has been exhibited nationally and internationally. 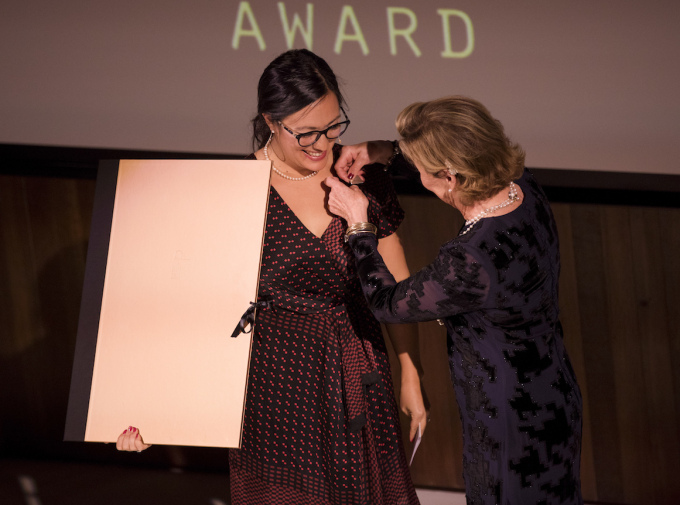 The jury has been deeply impressed by the consistent quality in Emma Nishimura’s body of work. The artist explores notions of memory and how history is interpreted and re-negotiated, through a varied use of traditional and contemporary printmaking techniques. Her body of work is exquisite and consistent – an exceptional thoroughness is at the core of her art practice.

The QSPA Lifetime Achievement Award was presented for the first time tonight. The Award celebrates an artist’s career and lifetime contribution to graphic art and printmaking.

It is a great honour for the QSPA board to present David Hockney with the first QSPA Lifetime Achievement Award for his distinguished contribution to the art of printmaking.

David Hockney (b. 1937) has been an important figure on the international art scene for many decades. He is one of the most popular and influential British artists of the 20th century.  The winner is not only critically acclaimed as a painter and sophisticated printmaker, but also widely appreciated as a skillful draughtsman, technical innovator, photographer, and stage designer.

David Hockney made his first prints as a student in 1954 and has since created a large body of exquisite works in traditional printmaking techniques, such as etchings and lithography, as well as experimenting with “homemade” prints, using photocopies and faxes, and computer drawings.

The artist’s technical mastery and lifelong experiments in printmaking has expanded the possibilities and our understanding of this field.

It is a great honour for the QSPA board to present David Hockney with the first QSPA Lifetime Achievement Award for his distinguished contribution to the art of printmaking.

The Queen Sonja Print Award is the world’s leading award for graphic art, and is presented every second year. The Award was originally a Nordic prize with the first awards given to Tiina Kivinen, Finland in 2012 and Svend-Allan Sørensen, Denmark in 2014. In 2016 the prize became international and was awarded to Tauba Auerbach, USA.

The winner receives a cash prize of NOK 400,000 and a residency at the Atelje Larsen art studio in Helsingborg, Sweden. The award seeks to generate interest in and promote the development of graphic art.