The Nobel Peace Prize was presented today in a formal ceremony at Oslo City Hall. Their Majesties The King and Queen and Their Royal Highnesses The Crown Prince and Crown Princess were in attendance as prize-winners Denis Mukwege and Nadia Murad received the award.

In October the Norwegian Nobel Committee announced it had awarded the Nobel Peace Prize for 2018 to Denis Mukwege of the Democratic Republic of the Congo and Nadia Murad of Iraq. They received the prize for their efforts to end the use of sexual violence as a weapon of war and armed conflict. 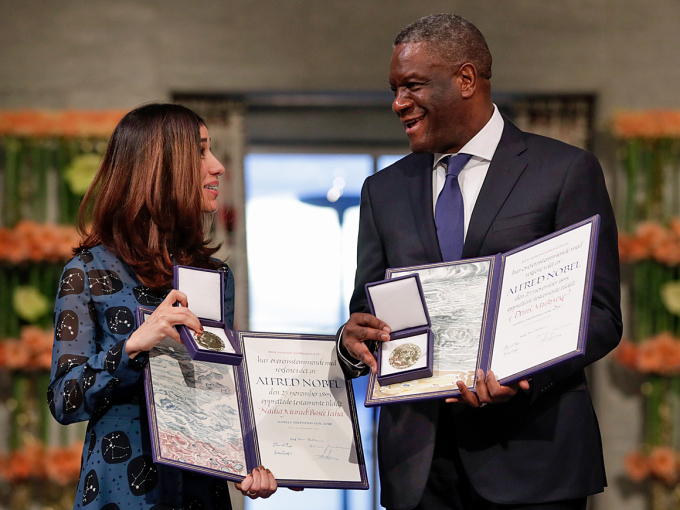 The decision states, among other things: “This year marks a decade since the UN Security Council adopted Resolution 1820 (2008), which determined that the use of sexual violence as a weapon of war and armed conflict constitutes both a war crime and a threat to international peace and security. This is also set out in the Rome Statute of 1998, which governs the work of the International Criminal Court. The Statute establishes that sexual violence in war and armed conflict is a grave violation of international law. A more peaceful world can only be achieved if women and their fundamental rights and security are recognised and protected in war.

“This year’s Nobel Peace Prize is firmly embedded in the criteria spelled out in Alfred Nobel’s will. Denis Mukwege and Nadia Murad have both put their personal security at risk by courageously combating war crimes and seeking justice for the victims. They have thereby promoted the fraternity of nations through the application of principles of international law.”

To see the full statement of the Norwegian Nobel Committee, click on the link at right.

The first Nobel Prizes were awarded in 1901 and the award was presented at the Norwegian parliament building. The formal Nobel Peace Prize Award Ceremony is now held at the Oslo City Hall each year on 10 December – the anniversary of Alfred Nobel’s death in 1895. 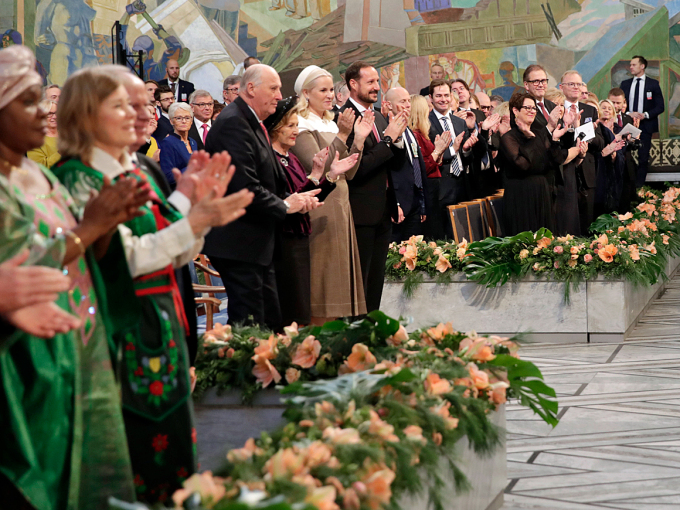 The Chair of the Norwegian Nobel Committee, Ms Berit Reiss-Andersen first spoke, reiterating the committee’s decision for awarding the prize, and then presented the Nobel Prize medals and diplomas to the prize-winners. This was then followed by Laureate Nadia Murad’s Nobel lecture. After a musical performance by Ane Brun, laureate Denis Mukwege gave his Nobel lecture. 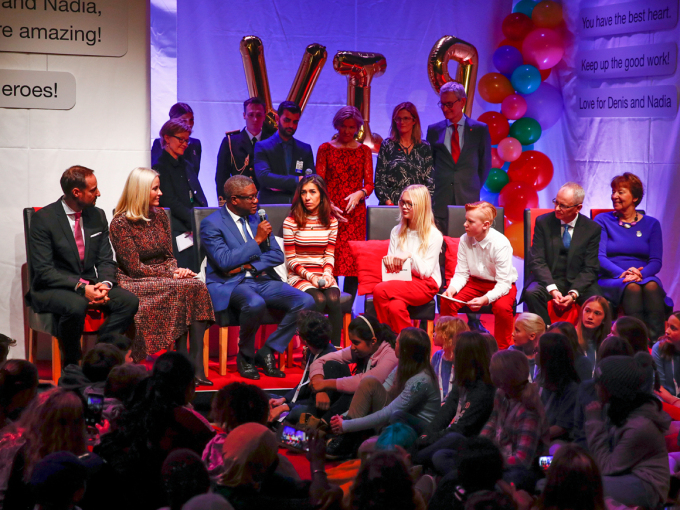 This year, seventh graders from Grünerløkka and Sagene primary schools organised the party and directed the hour-long event at the Nobel Peace Center. Both the Nobel laureates were interviewed by the seventh graders, and a compendium of children’s dreams was read aloud. Children also performed a song during the interview. Before and after the interview there was entertainment by reggae artist Admiral P. and the Norwegian Girls Choir, among others.

This evening the King and Queen and the Crown Prince and Crown Princess will attend the banquet honouring the two Peace Prize laureates at the Grand Hotel in Oslo.