His Royal Highness The Crown Prince presented the Norwegian award to Yara at the GreenTech Festival on Friday evening. The festival aims to become the world’s largest event promoting green solutions and a sustainable future.

The Green Tech Festival features exhibitions, conferences, lectures, awards and Formula E racing, and seeks to become the most important global event in its field. Norway is the official partner country for the festival this year, and Crown Prince Haakon took part in a number of events during the day prior to the evening’s award ceremony.

The festival is held at Berlin’s former Tempelhof airport, where a hangar has been repurposed as a trade fair hall.

Hangar 5 encompasses green technology that can be deployed at sea, on land or in the air. The exhibition is dedicated exclusively to green solutions, and displays many new products from producers of vehicles, aircraft and other modes of transport – as well as useful solutions for recreational activities and daily life. 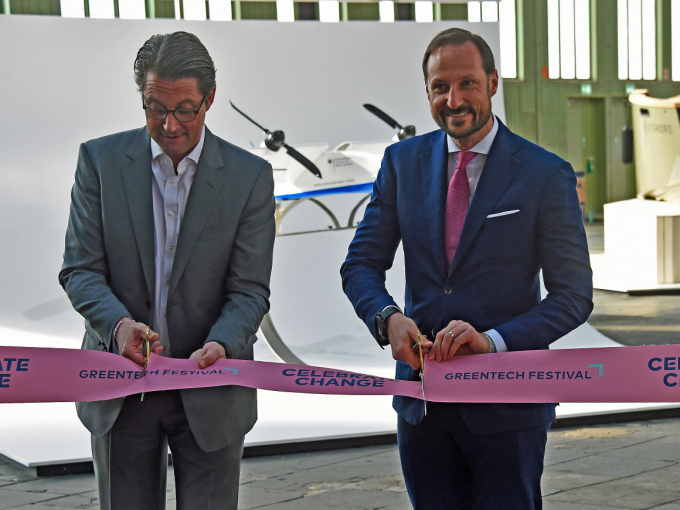 Norway has its own pavilion in the hall, with ten Norwegian companies presenting themselves for many potential business partners and customers. Five of these companies were nominated for this year’s Green Awards.

The Crown Prince visited the Norwegian pavilion and had the opportunity to meet with several representatives of Norwegian companies with green interests in Germany during lunch.

The future is electric

Crown Prince Haakon took the podium at a Norwegian event with a special focus on electrification of the transport sector. The Crown Prince emphasised the need to decarbonise the global economy while at the same time ensuring development of reliable energy sources and transport solutions at reasonable prices. He pointed out that different sectors need to work together if we are to achieve this. The authorities, the research community and the business sector must recognise and seize new opportunities. 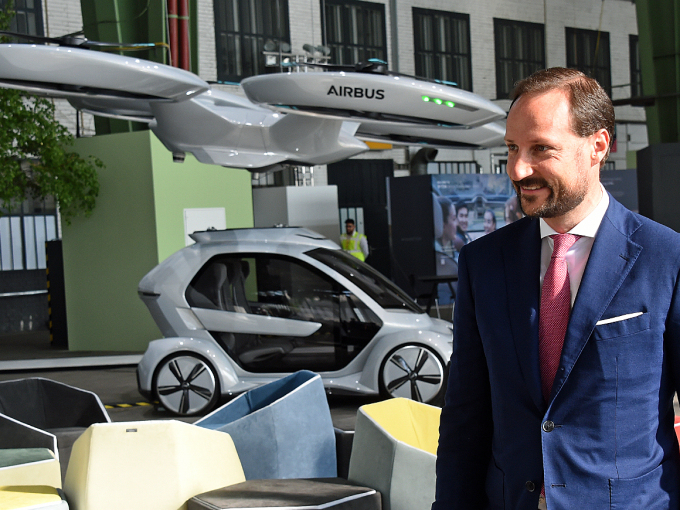 Many green transport solutions were on display in Hangar 5 at Tempelhof. Photo: Sven Gj. Gjeruldsen, The Royal Court.

Norway is at the forefront of green technology, particularly in the shipping sector. Several companies presented concrete solutions:

Crown Prince Haakon also gave the closing remarks at the festival’s centrepiece Green Leaders Conference. He recounted seminal inventions through world history and how the tremendous developments of the past 200 years have also led to the major climate challenges facing the world today.

The Crown Prince called for cooperation across national borders and greater investment in renewable technology. He also pointed out that there is a need for leadership. The necessary change will not come about on its own; it will require hard work. The Crown Prince’s message was well received by the many participants who attended the conference.

The awards ceremony is the highlight of the festival, recognising green technology and solutions that combine sustainability with profitability. Five awards were presented: 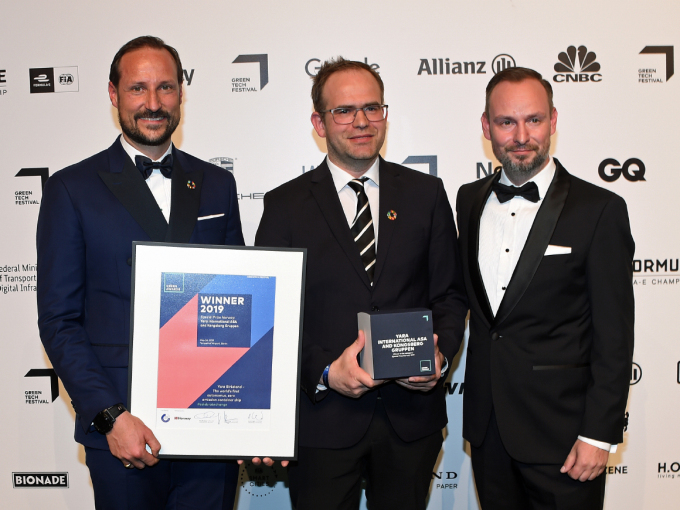 Crown Prince Haakon and Marco Voigt, a co-founder of the festival, presented the award to Yara. Photo: Sven Gj. Gjeruldsen, The Royal Court.

Crown Prince Haakon presented the Special Prize to the Yara Birkeland project, the world’s first autonomous, zero-emission container ship. Starting in 2020 the Yara Birkeland will be in operation in Norway between Yara’s fertiliser plant in Porsgrunn and the ports of Larvik and Brevik.

“Once the Yara Birkeland is launched it will replace 40 000 trips of diesel-powered lorry transport annually,” said project manager Bjørn Tore Orvik in his acceptance speech. 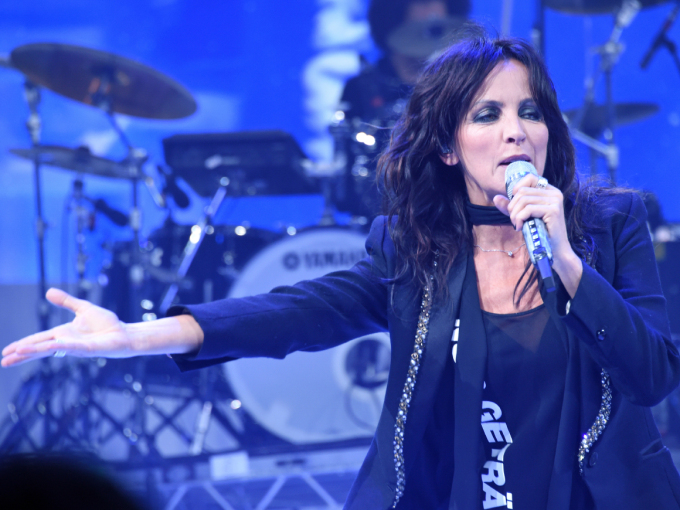 Innovation Norway organised the Norwegian participation in the festival, and is responsible for the online portal “The Explorer”, a digital marketplace for green technology from Norway. International companies and investors use the site to find reliable suppliers to meet their needs for technological solutions.

The Explorer has been designed based on the UN Sustainable Development Goals, and all suppliers seeking to present their products must satisfy stringent requirements. Firstly, all products featured on the portal must be environment-friendly solutions. Secondly, they must address one or more of the Sustainable Development Goals. Companies must also satisfy the criteria for good business practice.

The Explorer was launched for the Norwegian market in 2018, and Crown Prince Haakon presented the website to an international audience at Friday’s award ceremony.

Key note entitled "Innovation, Leadership and Hard Work" given by His Royal Highness The Crown Prince at the Green Leaders Conference at Greentech Festival in Berlin 25 May 2019. Copyright: Greentech Festival.
Links