State Visit from the Republic of Korea

His Majesty The King welcomed His Excellency President Moon Jae-in and First Lady Kim Jung-sook to the first State Visit to Norway from the Republic of Korea.

The State Visit marks the 60th anniversary of the establishment of diplomatic relations between the two countries. The Republic of Korea is Norway’s second-largest trade partner in Asia, behind China, and there is close dialogue and expanding cooperation in a number of other areas as well.

At 10:00 the procession with the President and his wife, accompanied by His Royal Highness Crown Prince Haakon, arrived at the Palace Square. There the King received the President and the First Lady in a formal welcoming ceremony. 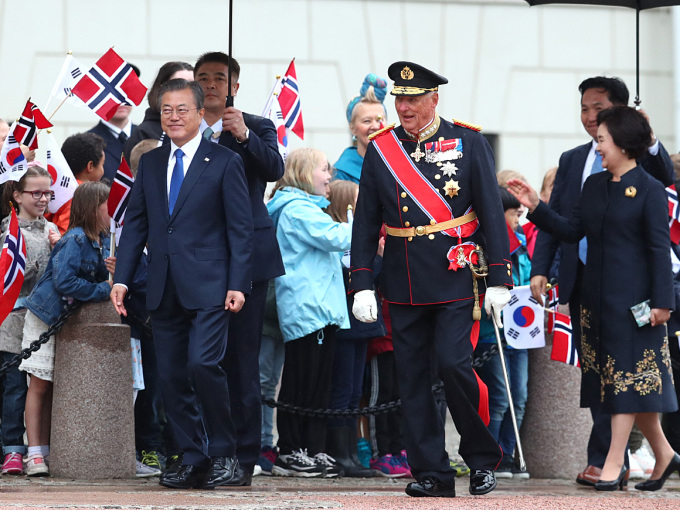 Children with Korean and Norwegian flags were assembled in the Palace Square. The President and his wife, the King and the Crown Prince took time to greet the children after the formal welcoming ceremony. Photo: Ryan Kelly / NTB scanpix.

Norway was one of the nations that participated in the defence of the Republic of Korea during the Korean War (1950‒1953) through the Norwegian Mobile Army Surgical Hospital (NORMASH). A total of 623 Norwegian men and women served at the field hospital, treating 90 000 military and civilian casualties.

President Moon Jae-in laid a wreath at the national monument commemorating their service today. A number of NORMASH veterans attended the ceremony. 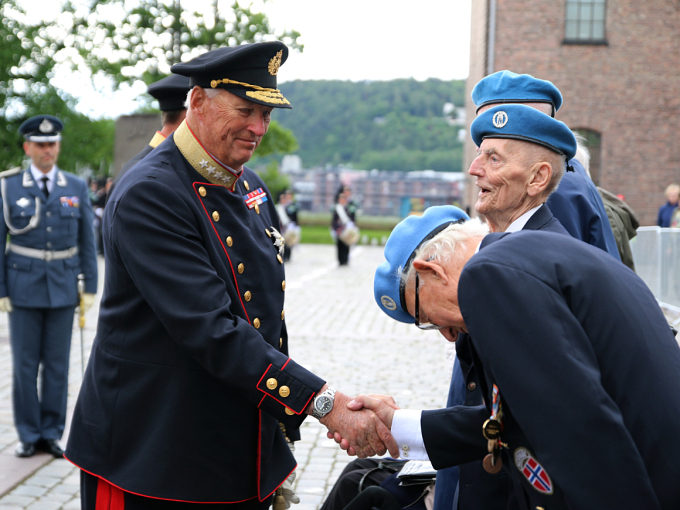 Speech in the Aula

After the wreath-laying ceremonies, President Moon Jae-in took the podium in the Aula of the University of Oslo to speak about the road ahead towards lasting peace on the Korean Peninsula. Following the speech, President Moon and Norwegian Minister of Foreign Affairs Ine Eriksen Søreide held a conversation moderated by Laura Bicker, a BBC correspondent in Seoul 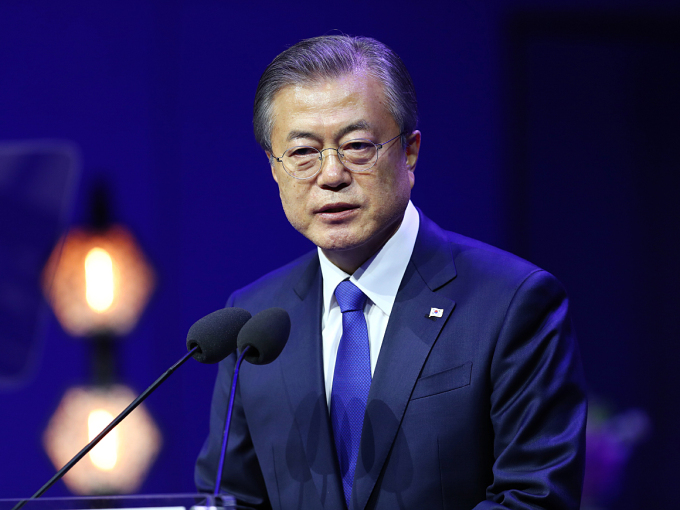 President Moon spoke in the University of Oslo Aula about the road ahead towards lasting peace and stability on the Korean Peninsula. Photo: Ryan Kelly / NTB scanpix.

The speech marks the one-year anniversary of the Singapore Summit, which gave new momentum to the work towards peace in Korea. The President’s speech was also a prelude to the Oslo Forum peace retreat being held next week.

A musical journey to Korea

After attending the luncheon hosted by the Government at Akershus Fortress, King Harald, Crown Prince Haakon and Her Highness Princess Astrid, Mrs Ferner continued on to the Oslo Opera House. There the Korean President and his wife hosted a musical journey to Korea.

It was a blend of traditional melodies, contemporary music and the phenomenon of Korean pop music, known as K-pop, that is taking the world by storm. 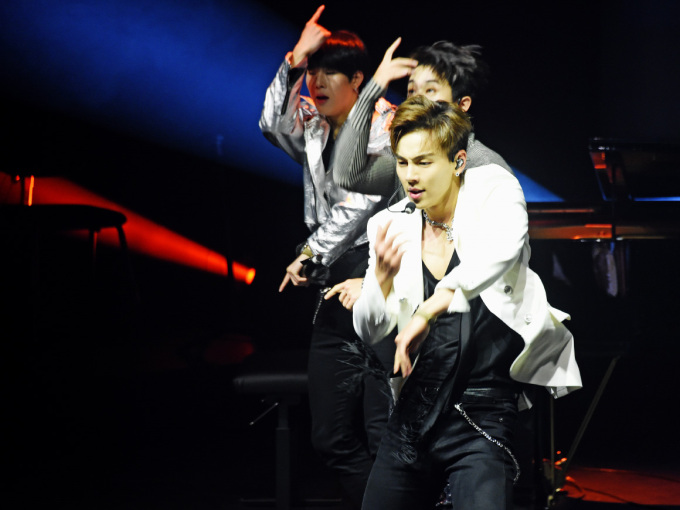 The audience was also treated to a performance by Sissel Kyrkjebø, who had her breakthrough in Korea in the early 2000s. The final act was Korean composer Jung Jaeil, concluding the event with “Spring Together”, a song espousing peace.

After the concert, the royal guests had the opportunity to meet the performers.

This evening a gala dinner is being held at the Royal Palace in honour of the Korean President and First Lady. King Harald lauded Korea and the President for the implementation of the 2018 Winter Olympics:

“While audiences around the globe focused on the sports competitions, the events in Pyeongchang represented something even more important,” the King emphasised.

“Through your initiative, Mr President, Koreans showed the world how sports can help to bridge conflicts and politics. After a long period of unrest and tensions, it was a peaceful Korean Peninsula that welcomed the world to battles between athletes in February 2018. It was an Olympics in the name of peace in the midst of winter competitions.” 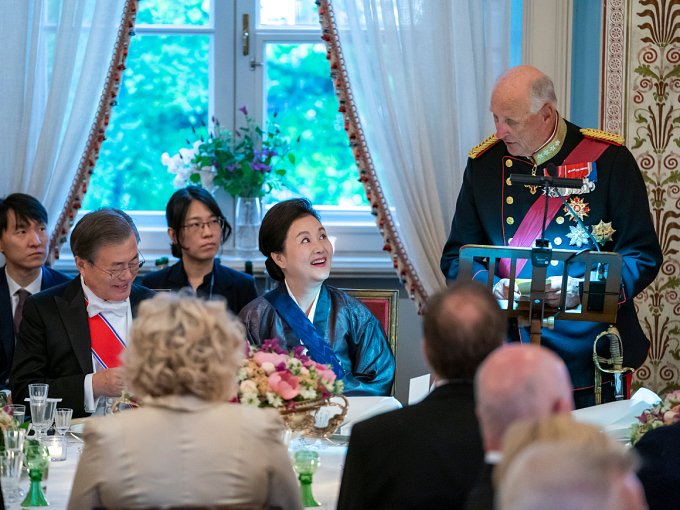 The King also highlighted the impressive development achieved in the Republic of Korea in the course of the 60 years since the two countries first established diplomatic relations:

“During this time, both our countries have experienced unprecedented economic development – from a time of limited resources to one of prosperity and progress. The Republic of Korea rose from the ashes of war to become the world’s 11th largest economy today. We are impressed by your rapid development to become a prosperous, democratic nation.” 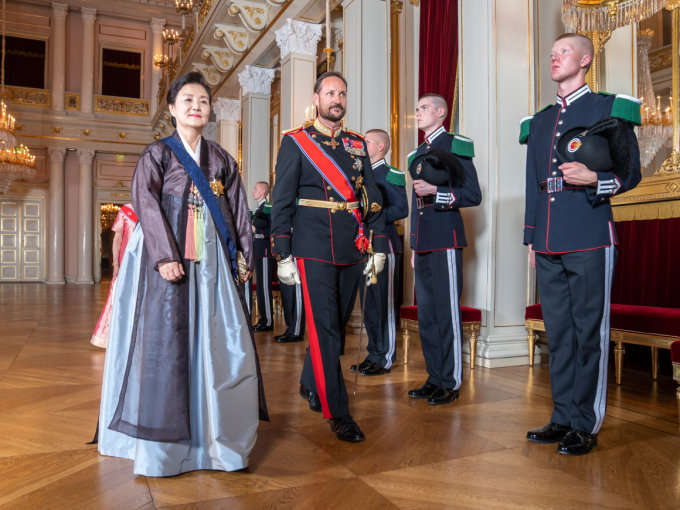 The State Visit will continue tomorrow with King Harald accompanying the President and First Lady to Bergen, where they will tour the marine vessel KNM Maud and attend a concert at Troldhaugen, the home of composer Edvard Grieg.

Facts about the Republic of Korea

Norway helped to defend the Republic of Korea during the Korean War (1950‒53) with the NORMASH field hospital.

Bilateral relations between the countries are good, and 2019 marks 60 years of diplomatic relations. The Republic of Korea is one of Norway’s most important trade partners in Asia. Trade has traditionally been dominated by shipbuilding and the offshore industry, but recent growth areas include seafood and technology as well. There is a large potential for expanded cooperation.

Some 70 Norwegian companies have been established in the Republic of Korea. 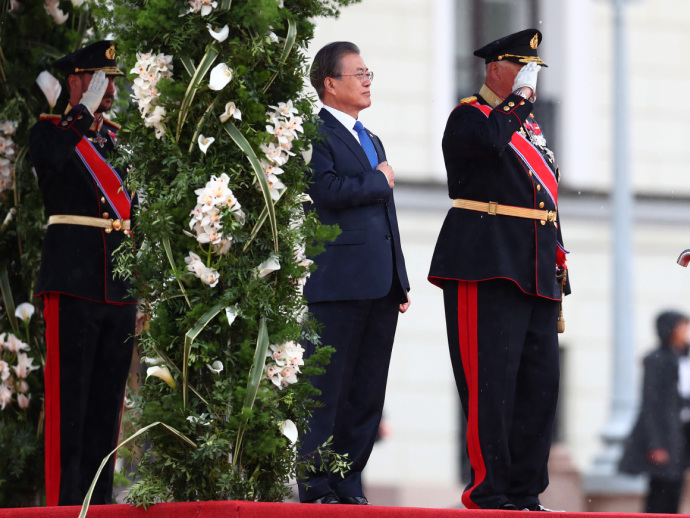