Ethiopian Prime Minister Abiy Ahmed Ali received the Nobel Peace Prize today in Oslo City Hall. The King and Queen and the Crown Prince and Crown Princess were all in attendance during the formal ceremony.

On 11 October of this year, the Norwegian Nobel Committee announced its decision on the 2019 Nobel Peace Prize:

“The Norwegian Nobel Committee has decided to award the Nobel Peace Prize for 2019 to Ethiopian Prime Minister Abiy Ahmed Ali for his efforts to achieve peace and international cooperation, and in particular for his decisive initiative to resolve the border conflict with neighbouring Eritrea. The prize is also meant to recognise all the stakeholders working for peace and reconciliation in Ethiopia and in the East and Northeast African regions.” 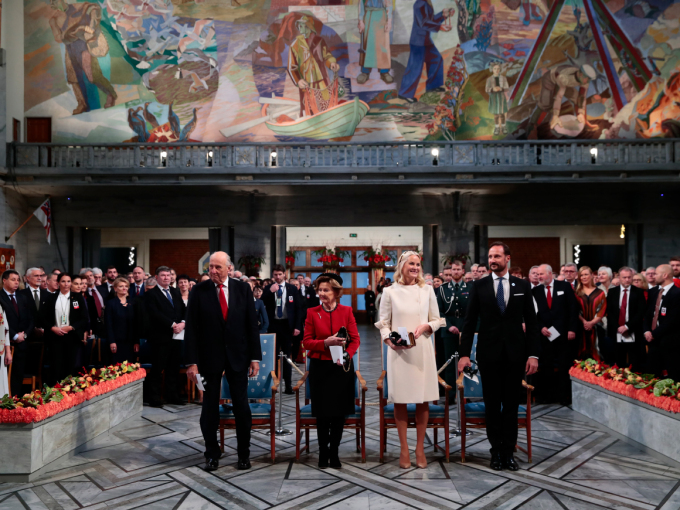 The King and Queen and the Crown Prince and Crown Princess take their seats for the ceremony at Oslo City Hall. Photo: Håkon Mosvold Larsen / NTB scanpix

In keeping with tradition, Their Majesties The King and Queen and Their Royal Highness the Crown Prince and Crown Princess were in attendance as Abiy Ahmed received the award.

The Chair of the Norwegian Nobel Committee, Berit Reiss-Andersen, explained the committee’s decision to award the prize to Prime Minister Abiy. 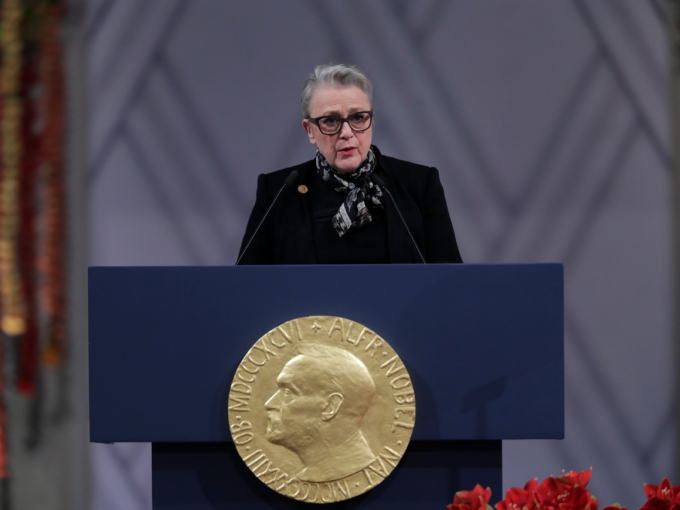 The Chair of the Norwegian Nobel Committee, Berit Reiss-Andersen, elaborates on the award of the prize to Abiy Ahmed. Photo: Stian Lysberg Solum / NTB scanpix

The end of Ethiopia’s protracted border conflict with neighbouring Eritrea is the focus of the award. The principles of the peace agreement were drawn up in close cooperation with Eritrean President Isaias Afwerki.

“The Norwegian Nobel Committee fully understands that peace is created in cooperation with others. We are awarding the Peace Prize to you as an individual because you have personally made an extraordinary difference across several arenas,” Ms Reiss-Andersen said. 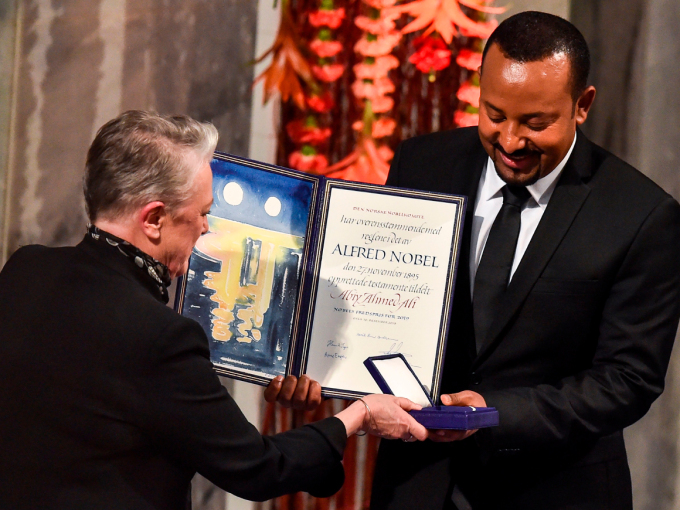 The Norwegian Nobel Committee Chair pointed out that Prime Minister Abiy has also taken part in peace and reconciliation processes in other countries as well as in democratisation measures at home in Ethiopia. In Ethiopia he has granted amnesty to thousands of political prisoners, ended press censorship, legalised opposition groups, dismissed leaders suspected of corruption and increased the influence of women in Ethiopian political and social life. Soon, free elections will be held in Ethiopia.

See the full statement of the Norwegian Nobel Committee here

After the award presentation, Abiy Ahmed delivered his Nobel lecture, which he opened by emphasising the central role the President of Eritrea has played in the peace process: 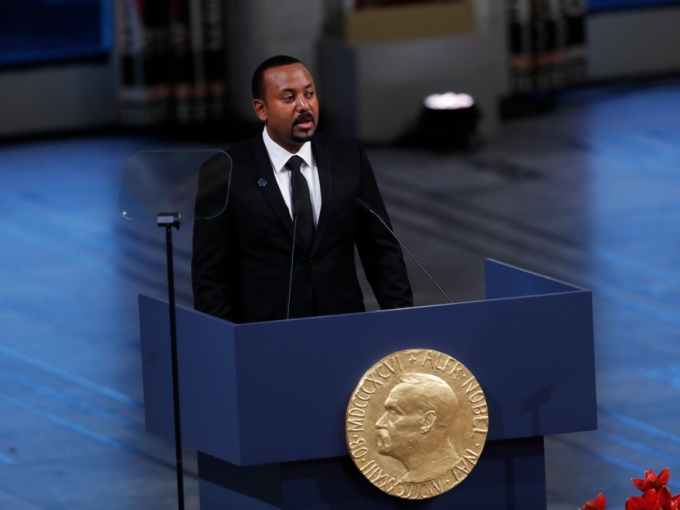 Abiy Ahmed gave a personal speech in which he shared his own experience of the atrocities of the war. “War is the epitome of hell for all involved. I know because I have been there and back,” he said.

The Peace Prize laureate ended his lecture to a standing ovation from the entire hall. 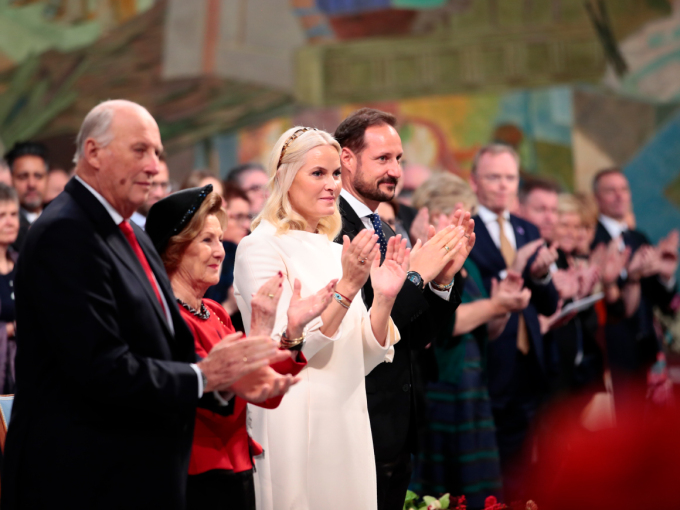 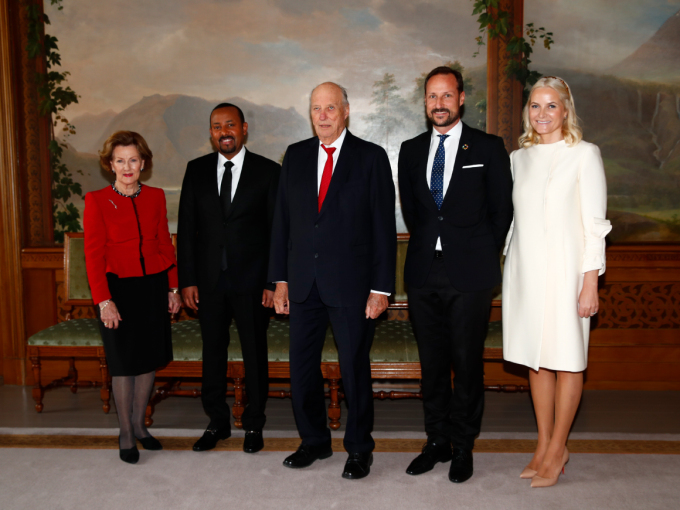 An audience at the Royal Palace is part of the regular programme honouring the Nobel Peace Prize laureate. Photo: Terje Pedersen, NTB scanpix

Save the Children Peace Prize Party

Save the Children celebrates the Nobel Peace Prize in its own way. For 23 years the organisation has staged a special Peace Prize event for children, which the children themselves help to plan. This year, 13 twelve-year-olds from schools in Grünerløkka, Kampen and Vålerenga helped to arrange the event at the Nobel Peace Centre.

The Nobel celebration continues throughout the evening with a number of regular award-day events. The Nobel Peace Prize laureate will be honoured with a torchlight parade through Oslo, from the central train station to the Grand Hotel. Later the traditional Nobel Banquet will be held. The King and Queen and the Crown Prince and Crown Princess will all attend the banquet.