The Royal Family marked Norway’s Constitution Day in both Asker and Oslo, and was present on the Palace Balcony as the whole country sang the national anthem of Norway at 13:00 pm.

At the Royal Palace, the May 17th celebration began in its customary fashion, with the raising of the extra-large version of Royal Standard at 8:00 to the peal of the bells of Oslo City Hall. The rest of the day’s festivities, however, were quite different from other years – for the Royal Family as well as everyone else. Despite this, it was a day with many fine moments. To ensure adherence to infection control measures, the Royal Family’s programme for the day was not announced in advance, so their activities came as a surprise to many.

Marked the day in Asker

Traditionally the Crown Prince and Crown Princess and their family greet the Asker municipality children’s parade from the steps outside Skaugum Estate early on the morning of May 17th. Today, however, they walked down the tree-lined driveway to the front gate and greeted representatives of pupils, choirs and marching bands. 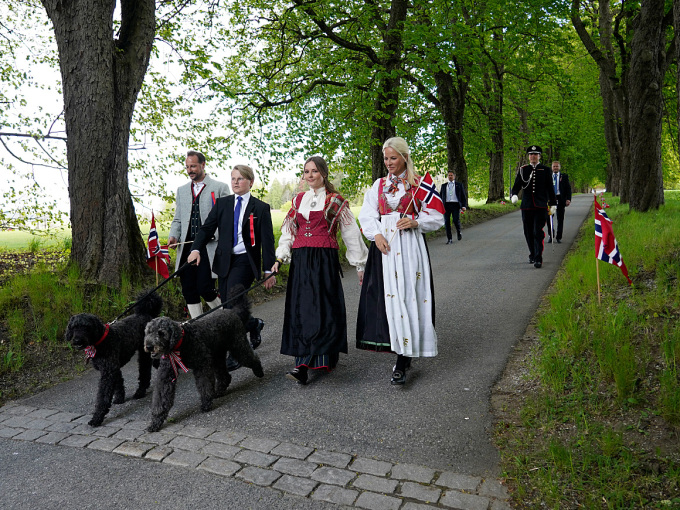 The Crown Prince and Crown Princess and their family walked down the driveway of Skaugum Estate. Photo: Lise Åserud / NTB scanpix.

In her speech, Mayor of Asker Lene Conradi pointed out how many of the words typically used in May 17th speeches – words praising the spirit of cooperation, community and caring – have taken on new meaning and relevance in the current times.

The Crown Prince and Crown Princess and their family also had an opportunity to meet the graduating class presidents of Asker, Bleiker, Nesbru and Røyken upper secondary schools. The family gave the class presidents a special banner to thank the graduating classes for respecting the advice of health authorities in a situation that has completely changed their traditional graduation celebrations. 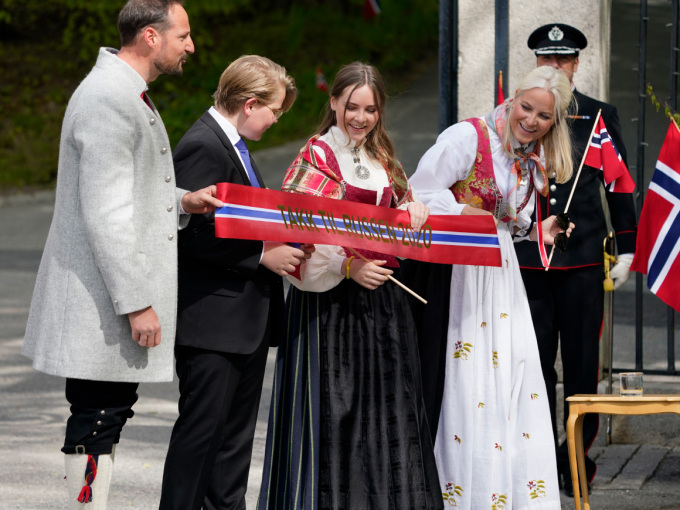 The Crown Prince and Crown Princess and their family gave a special banner to upper secondary school graduates – in recognition of how well they have followed the infection prevention guidelines during their graduation celebrations. Photo: Lise Åserud, NTB scanpix.

After the gathering at the front gate of Skaugum Estate, the Crown Prince and Crown Princess and their family took an unannounced drive around Asker municipality. Crown Prince Haakon and Crown Princess Mette-Marit rode in the legendary 1939 Buick Roadmaster, followed by Princess Ingrid Alexandra in the 1966 Lincoln Continental known from royal weddings. The ride included visits to a local nursing and care facility, a community assisted living and activity centre and a community housing cooperative. 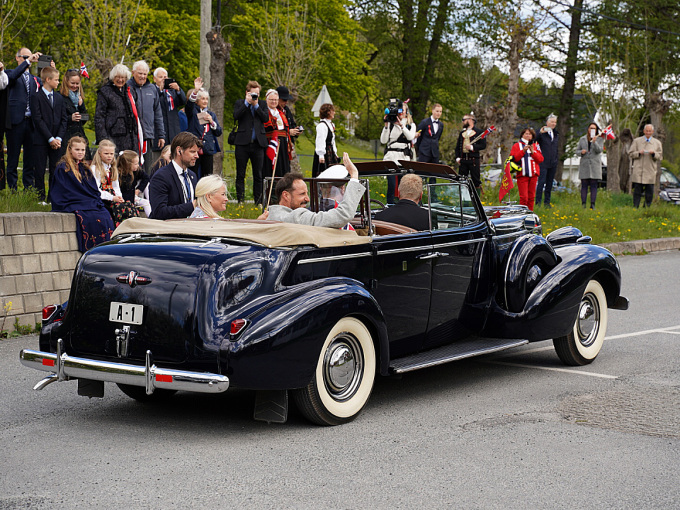 The Crown Prince and Crown Princess during a surprise visit in Asker in the 1939 Buick Roadmaster. Photo: Sara Svanemyr, The Royal Court.

National anthem in the Palace Square

The banners of 74 Oslo schools were positioned around the Palace Square. Most of the banners had been brought to the Palace the night before and were then carried out by pupils from Vålerenga and Grünerløkka schools. Both schools are celebrating their 125th anniversaries and were scheduled to march first in the May 17th children’s parade. 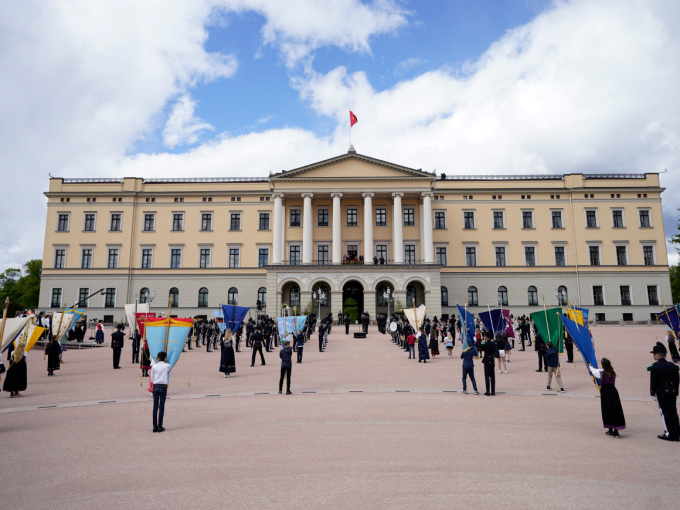 Banners of the Oslo schools were positioned in the Palace Square. Photo: Lise Åserud, NTB scanpix.

His Majesty The King’s Royal Guard Norwegian Military Marching Band, the Norwegian Soloists’ Choir, the Norwegian boys’ choir Sølvguttene and the Norwegian Girls Choir also were in place in the Palace Square as 13:00 approached. Just before the clock struck the hour, the Royal Family came out on the Palace Balcony. The choirs led the national anthem, which was sung at the same time by people throughout the country. 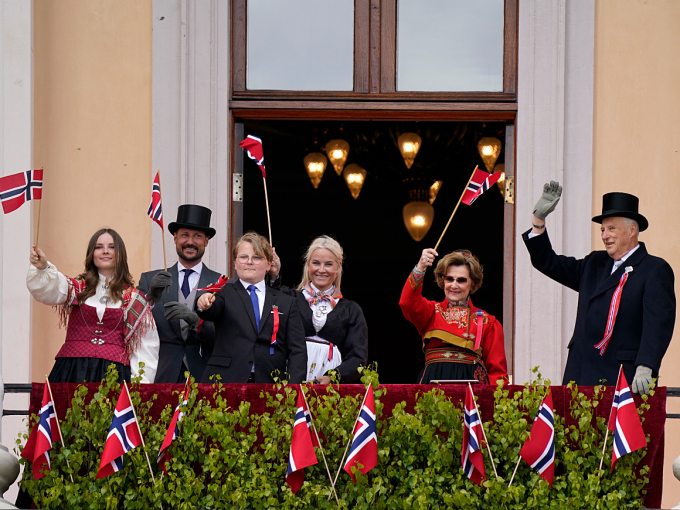 This year, Oslo’s schoolchildren were not able to march in the traditional parade through the Palace Square and wave to the Royal Family. Together with student council leaders from Vålerenga and Grünerløkka schools, Mayor of Oslo Marianne Borgen presented more than 3 500 drawings and other greetings sent by schoolchildren to the King and Queen.

His Majesty The King’s Guard performed music and a drill exhibition before the programme in the Palace Square concluded with the singing of the royal anthem.

The ceremony was followed by an unannounced tour through Oslo. After the programme in the Palace Square came to a close, the King and Queen took their seats in the 1939 Buick Roadmaster. The Crown Prince and Crown Princess followed closely behind in the 1966 Lincoln Continental as the motorcade left the main gate of the Palace and travelled down the main avenue Karl Johans gate. 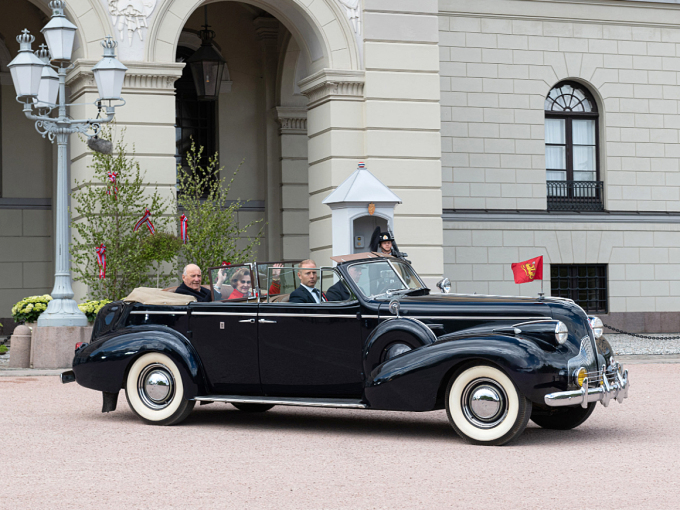 The King and Queen embark on their surprise visit around Oslo in the 1939 Buick Roadmaster. Photo: Øivind Møller Bakken, The Royal Court.

The procession in the classic convertible cars came as quite a surprise to many as it made its way through the city, driving past an elder care apartment centre, a skilled nursing facility and Oslo University Hospital Ullevål. 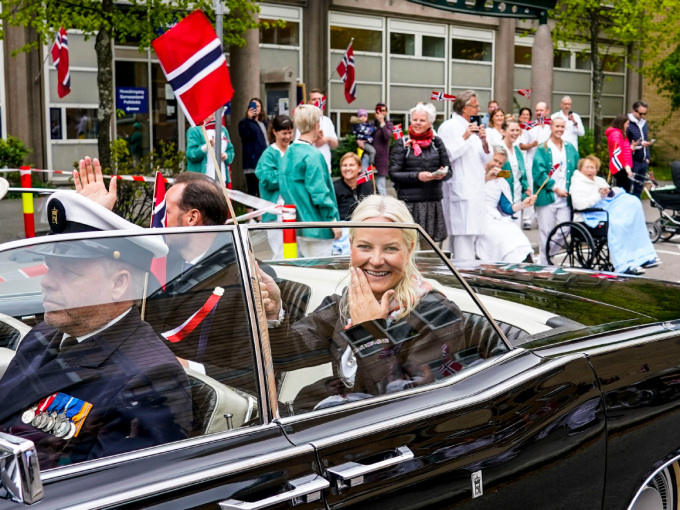 The car ride through Oslo concluded the Royal Family’s programme for the day.