The most important room in the world

“The most important room in the world” was a gift to the United Nations from Norway in 1952. On Friday evening, Her Majesty The Queen introduced the digital exhibition on the design of the UN Security Council Chamber.

- It is my hope that this unique digital exhibit will shed light on the history and inspiration behind the Security Council Chamber. Let it remind us all of the ideals we must continue to work towards for our common future – in the "the most important room in the world".

With these words, the Queen concluded her introduction to the exhibition "Crafting Unity".

Few rooms have served a greater number of heads of state or heard more important discussions. This is where the United Nations Security Council, the UN’s principal organ for international peace and security, convenes for its meetings. Under the UN Charter, the Security Council has the power to recommend international sanctions and authorise military action, and all 193 of the Member States are to comply with the Council’s resolutions.

The room that frames these important meetings contains a number of symbolic features. The well-known Norwegian architect, Arnstein Arneberg, designed the room, and prominent Norwegian artists helped to decorate the interior.

The room is designed to promote open dialogue. One of the key elements in this is the grand conference table used by the delegates. Shaped like a horseshoe, the table enables those around it to sit facing each another and look each other in the eye.

"It signifies the importance of equality and dialogue among nations in our common pursuit of peace – reflecting an enduring Norwegian approach to conflict solving," Queen Sonja said in her speech. 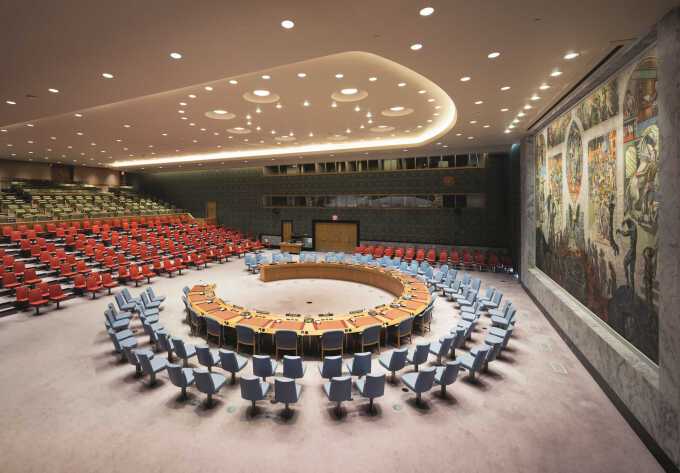 The Security Council Chamber with the grand conference table in the centre. Photo: Ivan Brodey

The large mural in the chamber features the central image of a phoenix rising from the ashes of the world. According to its painter, Per Krogh, the work illustrates the effort to emerge from a dark past of war to achieve a better life.

In her remarks, the Queen quoted the artist’s own words:

""The essence of the idea is to give an impression of light, security and joy."At the heart of the UN Charter we find the same vision – of a world that will unite to maintain international peace and security,”  said the Queen.

Another prominent feature of the Chamber is the iconic blue and gold wall tapestry – created by the important Norwegian textile artist Else Poulsson. Her concept incorporates the anchor of faith, the growing wheat of hope and the heart of charity – enduring symbols of values that are needed just as much today as they were 75 years ago.

A painstaking renovation completed in 2013 updated the room while preserving its original design from 1952. This is in keeping with Arnstein Arneberg’s understanding of his task, which was to execute a room that would withstand the test of time, using durable materials and a neutral character that represented something more than the prevailing contemporary taste.

Film published by the UN on completion of the renovation of the chamber in 2013. Photo: UN

Norway does not have a permanent seat on the UN Security Council, but has a permanent presence through the art, craftsmanship and values that distinguish the design of this unique space.

On the day of the opening of the exhibition, Norway held a virtual reception for the United Nations ambassadors. The reception marked the end of Norway’s campaign for a seat on the Security Council for the period 2021–2022. His Royal Highness Crown Prince Haakon participated together with Norwegian Minister of Foreign Affairs Ine Eriksen Søreide via video conferencing from Oslo.