Visiting the victims in Gjerdrum

Their Majesties The King and Queen and His Royal Highness The Crown Prince visited Gjerdrum today following the catastrophic quick-clay landslide on Wednesday morning.

“It has been a very emotional day for us. It is hard for me to find the right words, because this is so awful,” King Harald said after the visit.

The King and Queen and Crown Prince Haakon met evacuees and family members as well as municipal officials and emergency and rescue service workers who have been working non-stop since the collapsing quick-clay swept away numerous homes near the administrative centre of Ask in Gjerdrum municipality.

The King and Queen arrive at Olavsgaard Hotel to meet people affected by the Gjerdrum landslide. Photo: Lise Åserud / NTB

King Harald and Queen Sonja told of the tragic stories they heard, and praised the emergency services and volunteers.

“We have been briefed in detail about the work being done by the emergency services. It is truly impressive – the highly skilled people, the excellent teamwork. What we saw was remarkable. This small municipality of 7 000 people has a warm-heartedness that touched us deeply today. Determination and a sense of compassion pervaded everything we encountered,” the Queen said.

Six fatalities have been confirmed, while four people are still missing. Ten people were listed as injured in Wednesday’s landslide and were transported to hospital or a local urgent treatment centre.

The King and Queen arrived with the Crown Prince at Gjerdrum cultural centre just before 11:00 in the morning. They were received by Mayor Anders Østensen, Chief of Police Ida Melbo Øystese and task force leader Anders Solberg Bru of Norway’s Eastern Police District.

The task force leader described the situation in the affected area and the rescue operation that is still ongoing. Fire and rescue personnel and police crews are busy on the ground. Helicopters, drones and dogs are also being employed in the search.

Representatives of the health and care services, the fire and rescue service and the Armed Forces provided information about their activities as well.

After the first briefing, King Harald, Queen Sonja and Crown Prince Haakon were accompanied to a new meeting room to be briefed by municipal officials and voluntary organisations on the care provided to persons affected by the catastrophe, including family members.

“We are a municipality under major strain, in a surreal situation,” Mayor Anders Østensen said.

“In the early hours of Wednesday morning,” he continued, “this municipality changed from a small, sleepy place to the centre of one of the worst disasters in Norway in recent time. We practise for crises and crisis management, but this was far beyond what we could grasp.”

In Gjerdrum, 31 housing units in at least nine buildings were carried away in the quick clay debris. Other infrastructure was also destroyed, including garages. 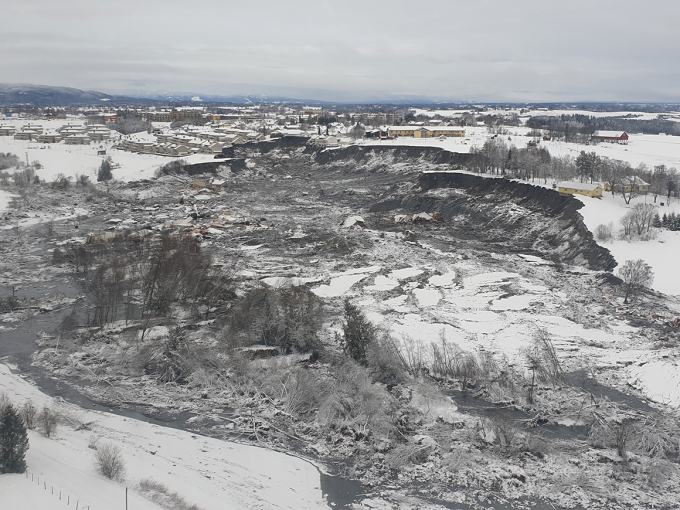 Swedish rescue workers contributed to the rescue operation but have now returned to Sweden. During the visit by the King, Queen and Crown Prince, rescue crews continued their work in the landslide area.

Lit candles lit in the church

King Harald, Queen Sonja and Crown Prince Haakon were met by Bishop Atle Sommerfeldt outside Gjerdrum church. After entering, they lit candles for those affected by the disaster.

After the candle lighting, the King and Queen travelled to Olavsgaard Hotel in Hvam, where they met evacuees and other people who have been affected by the slide. The Crown Prince travelled to the Clarion Hotel at Gardermoen to talk with people in similar circumstances there.

“The people struck by this crisis are in the midst of a very difficult situation,” the Crown Prince said after meeting with relatives and loved ones of people whose deaths had been confirmed or who were still missing, as well as people who had lost their homes or been evacuated.

Crown Prince Haakon discusses the meeting he had at Gardermoen with evacuees and relatives of victims. Photo: Tor Erik Schrøder / NTB

“The stories they tell are shocking and extremely powerful. It is painful to feel what they are going through. There are a great many people who want to help,” he said, praising the tireless efforts and determination of rescue crews, the municipality and volunteers.

In his speech to the nation on New Year’s Eve, King Harald spoke directly to all those affected by the disaster.

“This terrible event makes a deep impression on all of us. My heart goes out to those of you who are entering the new year with sorrow and uncertainty. Who have lost your homes, are overcome with despair and find it difficult to see the way forward,” he said.

The King also praised the public authorities, emergency services and civil society organisations for the enormous task they are carrying out under challenging conditions.

“A great deal of difficult work still remains. And once again, we see people mobilising to help their fellows in need. I am touched and I am proud.”