Her Royal Highness The Crown Princess sent a digital greeting to the National Pilgrim Conference today – and a warm thank you to everyone working to maintain the old pilgrimage routes.

Pilgrimages were very common in the Middle Ages and have experienced a renaissance in recent times. The National Pilgrim Center is responsible for public pilgrimage initiatives, which rest on four basic pillars: church/belief, culture, the environment and business.

Today’s conference brought together stakeholders responsible for renewal and inspiration within these four areas. The goal is to strengthen and coordinate efforts to ensure that pilgrims have encounters that add value to their personal journeys.

It is deeply meaningful – and it reminds us that we are all part of something larger than ourselves. That our own lives are extensions of a long lineage.
The Crown Princess.

The concept of embarking on a pilgrimage is familiar in most religions. Within Christianity, the tradition can be traced back to the Church’s earliest era. Early Christians wanted to visit the places where Jesus had been, such as Jerusalem and Bethlehem.

People have always undertaken journeys, and for many different reasons, the Crown Princess said in her greeting. But she pointed to what is special about pilgrimages:

“A pilgrimage has an extra dimension to it. It unites us with people who lived before us, who have journeyed towards the same goal – in hope and prayer, in despair or gratitude. It is deeply meaningful – and it reminds us that we are all part of something larger than ourselves. That our own lives are extensions of a long lineage.”

Her Royal Highness Princess Ingrid Alexandra joined the pilgrimage tradition as part of her confirmation preparations in 2019, walking the final leg of the pilgrimage route towards Nidaros Cathedral together with the Crown Prince. 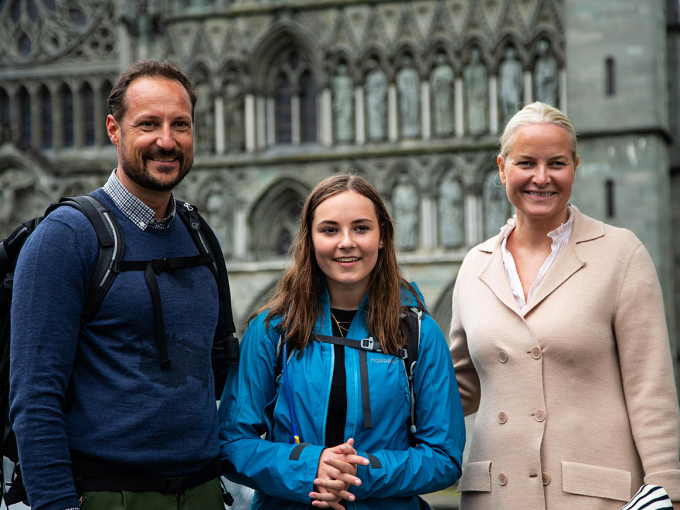 Crown Princess Mette-Marit met the Crown Prince and Princess on their arrival at Nidaros Cathedral, and the family entered the cathedral together. Photo: Kjartan Ovesen, NRK/NTB

Nidaros Cathedral is the site of Saint Olav’s tomb, and in the Middle Ages, Nidaros was the Nordic region’s most important pilgrimage destination. Today, pilgrims again flock to Nidaros Cathedral.

Above the ruins of the monastery at Selja, in the district of Nordfjord, is Saint Sunniva’s cave. According to legend, it is where Sunniva died in the 10th century. Pilgrims have made their way here for over 1 000 years, and Saint Sunniva’s cave is considered the oldest pilgrimage destination in Norway. 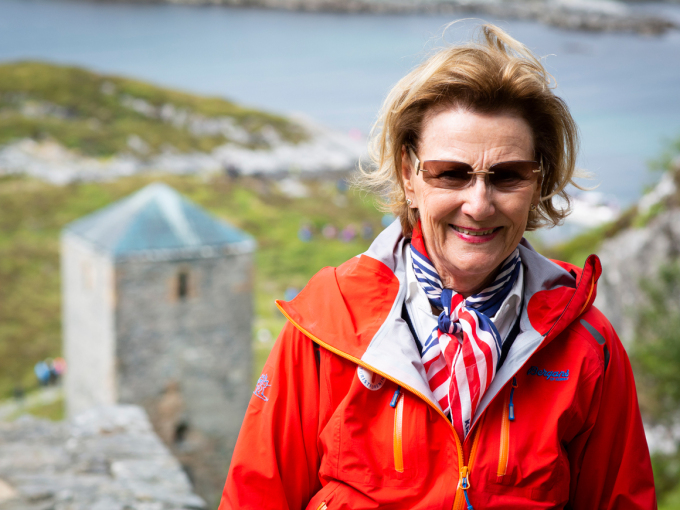 Queen Sonja on her way up to Saint Sunniva’s cave during her visit to Selja. Photo: Liv Anette Luane, The Royal Court

In 2018, Her Majesty The Queen visited Selja to mark the 950th anniversary of the Diocese of Bjørgvin, and she opened the Coastal Pilgrim Route during her visit.

The legend of Saint Sunniva was the reason Olav Kyrre established a western Norwegian diocese based on the island of Selja. Saint Olav and Saint Sunniva were the foremost saints of the Norwegian Middle Ages and key figures during the conversion of Norway to Christianity.