At 11:30 am the Royal Family came out on the Palace Balcony, and at 12:00 noon the Norwegian national anthem sounded across the Palace Square. This was one of many high points today before the festivities concluded on board the Royal Yacht.

The Constitution Day celebration in 2021 was once again different from most other years. Nonetheless, many of the customary traditions of the day were upheld – in a slightly different format. This year, the plans for the Royal Family’s programme was announced in advance, with some details held back to ensure adherence to infection control measures.

Marked the day in Asker

Traditionally the Crown Prince and Crown Princess and their family greet the Asker municipality children’s parade from the steps outside Skaugum Estate on May 17th. Today, however, they walked down the tree-lined driveway to the front gate to greet representatives of the municipal schools, as well as members of the local choirs, marching bands and scout troops. 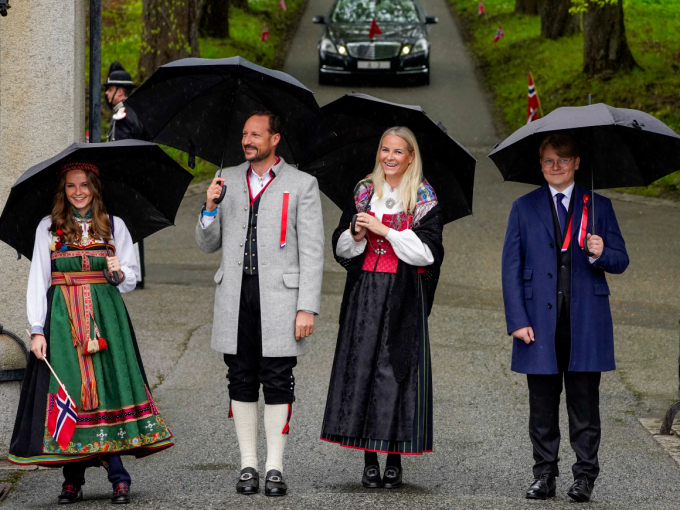 “We miss you up at Skaugum,” said Crown Prince Haakon. The family enjoyed the opportunity to talk with with all those who had braved the rain to be there. 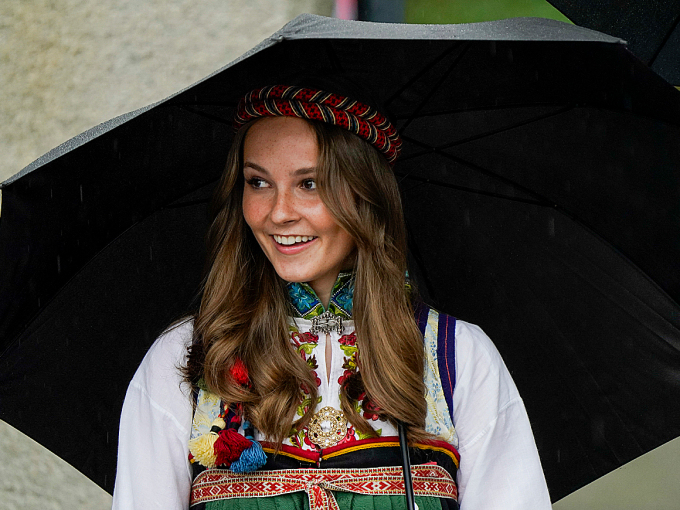 “Luckily for us, the restrictions on our freedom are just limited in time,” said Mayor of Asker Lene Conradi. In her remarks, she also lauded the efforts of young people to obey the infection control rules during the pandemic. Representatives of the graduating classes from Asker upper secondary schools were among those who met the Crown Prince and family at Skaugum today. 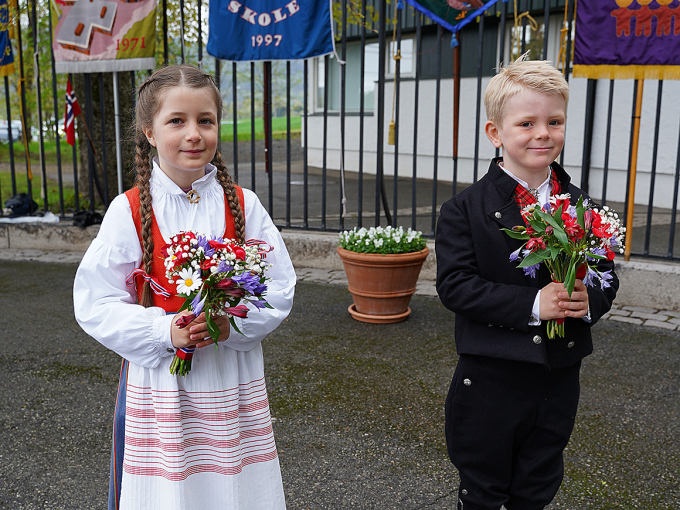 Linnea Isabel Nesteby and Philip Johannsen Vengstad, both of whom turned 8 today, had the honour of presenting flowers to the Crown Prince and Crown Princess. Photo: Liv Anette Luane, The Royal Court

After the gathering at the front gate, the Crown Prince and Crown Princess and their family took a drive around Asker. The route was not announced beforehand, and their visits to Gullhella assisted living and care centre, Korpåsen condominium complex and Blakstad school, came as a great surprise to the residents. 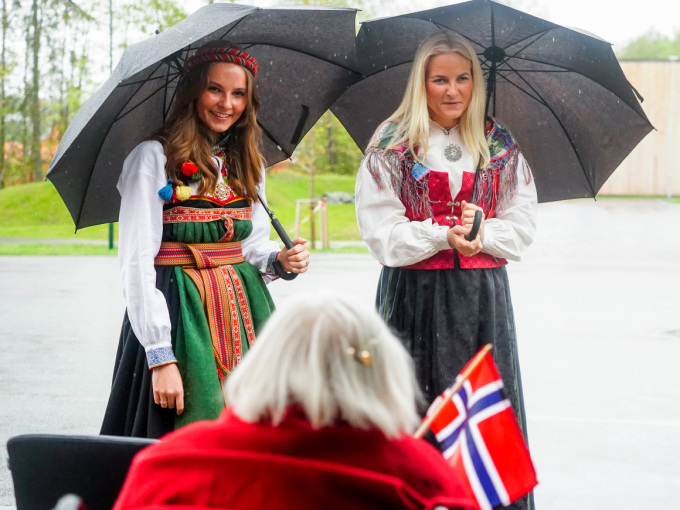 National anthem in the Palace Square

At 11:30 the Royal Family came out on the Palace Balcony. They were met by a fanfare from His Majesty The King’s Guard, which was in position in front of the Palace. The banners of three schools were brought out by representatives of the pupils: first Ruseløkka school, which turns 150 this year, then Bestum school, which celebrates its centennial, and finally by Ellingsrudåsen, which turns 50. These are the schools that would have headed the children’s parade had this been a normal year. Today they served to represent all of Oslo’s schools at the celebration at the Palace Square. 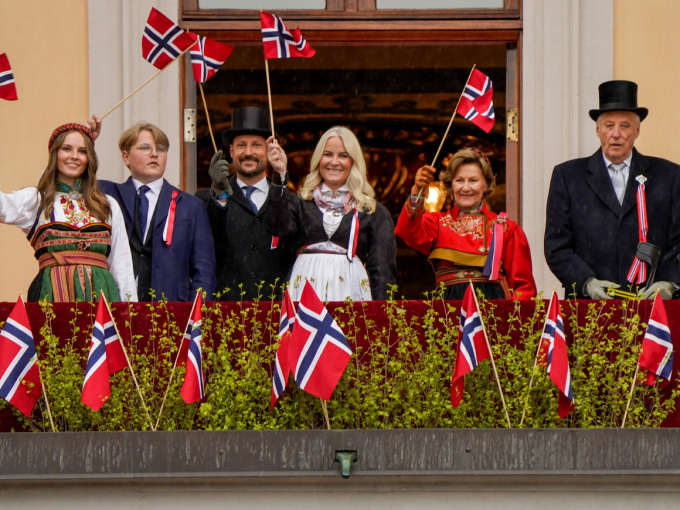 The Royal Family on the Palace Balcony. Photo: Lise Åserud.

At 12 noon, the Norwegian national anthem was sung. The Norwegian Girls’ Choir led the singing together with Bislett Boy’s Choir, Bolteløkka Girls’ Choir and His Majesty The King’s Royal Guard’s Military Marching Band. The celebration in front of the Palace included speeches, a presentation of some reflections from young people, a drill exhibition, and song and dance performances. 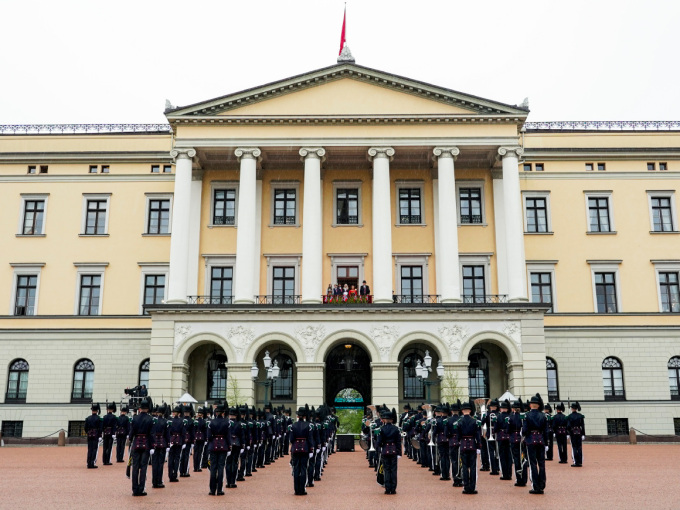 The Royal Family watched the celebration from the Palace Balcony and sang along as people all across Norway sang the national anthem. 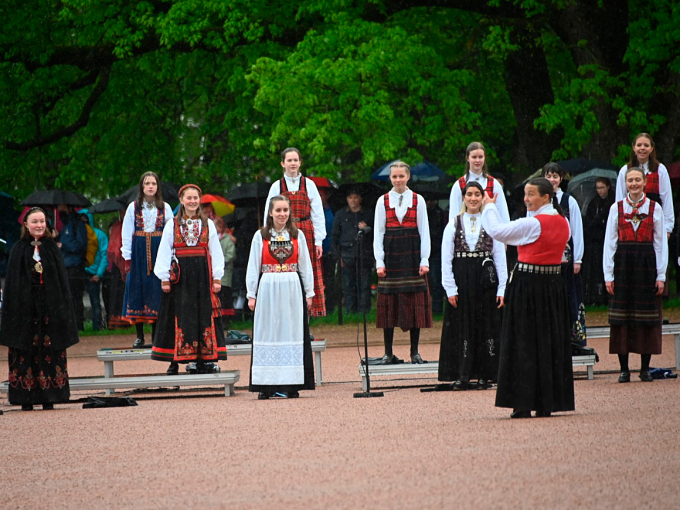 The Norwegian Girls’ Choir led the singing of the national anthem from the Palace Square. Photo: Sven Gj. Gjeruldsen, The Royal Court.

Surprise visit to districts in Oslo

Just like last year, the King and Queen and the Crown Prince and Crown Princess left on a driving tour through the streets of Oslo after the programme in the Palace Square. The details of their route were not announced beforehand in order to prevent any large crowds from assembling. The original plan was to use the classic convertibles, with the Buick Roadmaster in the lead, but this was not feasible due to the weather. Despite the rain, there were many people who came out to cheer and wave along the routes. 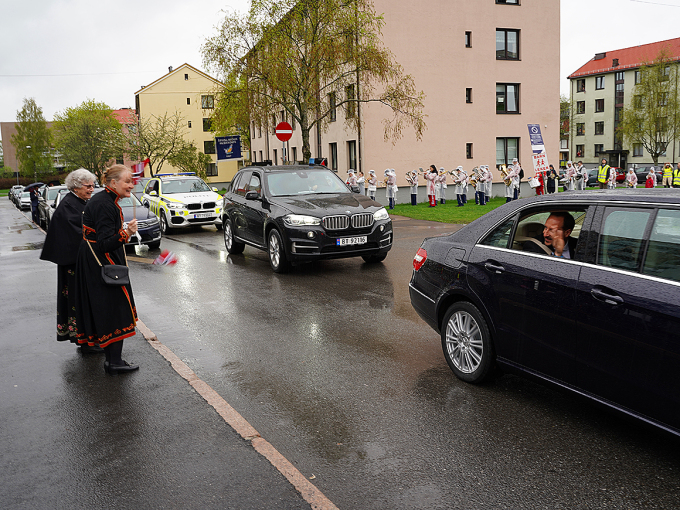 The Grünerløkka School marching band played at Birkelunden today, and was in place when the motorcade passed through the Grünerløkka district. Photo: Berit Roald / NTB

The motorcades with the King and Queen and the Crown Prince and Crown Princess took separate routes, visiting the districts of Årvoll, Økern, Tøyen, Grünerløkka and Sagene before arriving at the City Hall Square. All along the way, local school marching bands delighted the spectators with their music.

Out on the fjord on the Royal Yacht

For many of those who live directly along the coast, a boat procession is a natural part of the Constitution Day celebration. Today, the procession in the inner Oslo Fjord was accompanied by the Royal Yacht Norge. The Royal Family concluded the day’s official programme on board the Norge, waving to the myriad of boats and people who came out on their balconies, to the quays or in their boats to enjoy the procession along the fjord. 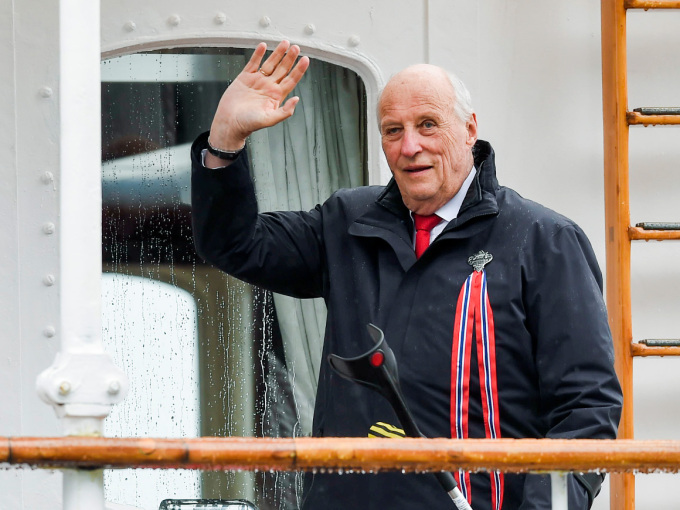 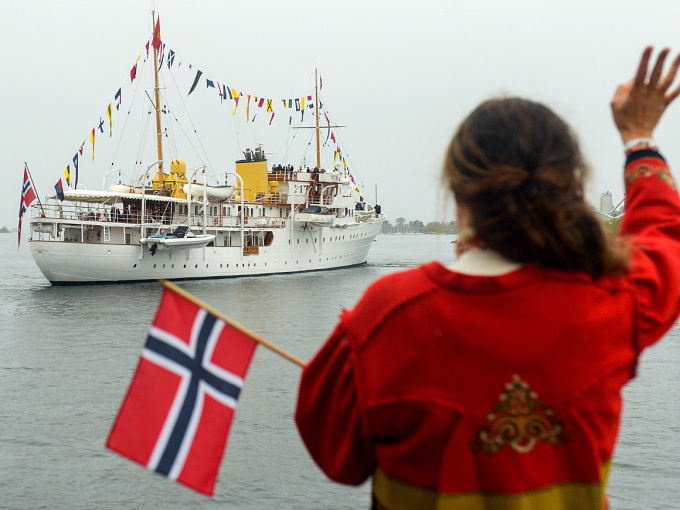 The Royal Yacht Norge sailed from Oslo, and made its way to Tønsberg as its final destination for the day. Photo: Annika Byrde / NTB.