On Thursday, Her Majesty The Queen opened the Nordic-Sámi art exhibition in the Nordic Pavilion at the Venice Art Biennale, the biennial celebration of contemporary art held in Italy.

Three Sámi artists from Norway, Sweden and Finland have been selected to show their works at the exhibition “The Sámi Pavilion”.

This is the first time that the Nordic regional cooperation has been represented by Sámi artists in the Biennale’s Nordic Pavilion, with artists selected from the Finnish, Norwegian and Swedish parts of Sápmi, the homeland of the Sámi people.

The Queen was given a tour at the exhibition "The Sámi Pavilion". Photo: OCA / Marta Buso

The artists – Finland’s Pauliina Feodoroff, Norway’s Máret Ánne Sara and Sweden’s Anders Sunna – have traditional backgrounds in reindeer herding families and integrate strong political awareness into their works. The artists explore issues such as self-determination, identity, climate change, deforestation and the right to land and water. 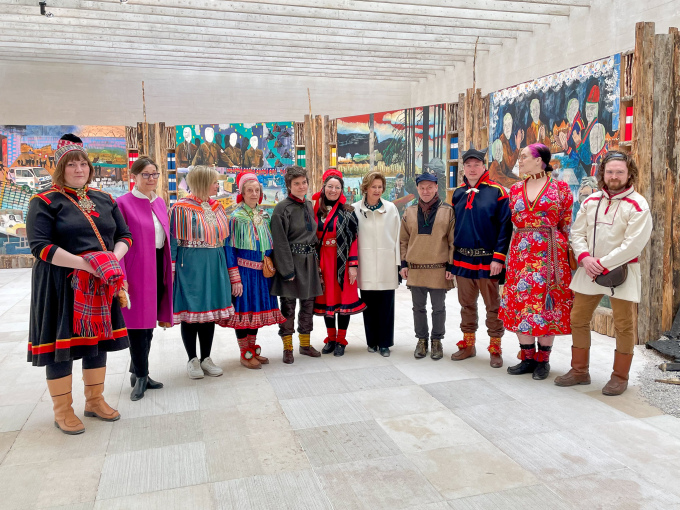 Queen Sonja was given a tour of the exhibition, together with the three artists, the Curatorial Group and the Elders. Photo: Guri Varpe, The Royal Court

The Sámi Pavilion exhibition shows the contribution of indigenous peoples to contemporary art as well as the importance of artistic freedom, diversity and distinctive forms of expression.

A reminder of the importance of art and culture

After a tour of the pavilion, where the artists and curators presented their work, Queen Sonja opened the exhibition.

In her speech, the Queen emphasised the significance of art and culture at a time when freedom and democracy are under attack in Europe in a way not seen since World War II. The Queen took the opportunity to express support for the Ukrainian people in the fight against Russia’s invasion.

The Queen also voiced her happiness that this year’s Nordic Pavilion is displaying and celebrating Sámi art.

“The works draw attention to topics that indigenous peoples all over the world are facing. Issues like climate change, deforestation and identity rights,” the Queen said in her opening remarks. 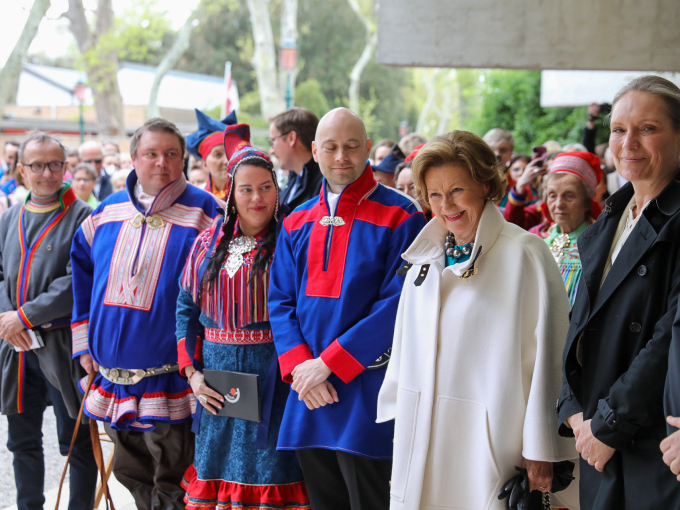 The Queen also visited the Danish, Canadian and British art pavilions, and later in the day she attended a reception hosted by the Presidents of the Sámi Parliaments of Norway, Sweden and Finland and the Norwegian Office for Contemporary Art (OCA).

The Venice Art Biennale is one of the world’s most important contemporary art arenas. The Biennale began in1895 and is the world’s oldest biennial art exposition. Today it is recognised as one of the premier cultural institutions in Italy and the world.

The Nordic countries have had a permanent pavilion in Venice since 1962. The Nordic Pavilion, designed by the Norwegian architect Sverre Fehn, is celebrating its 60th anniversary. 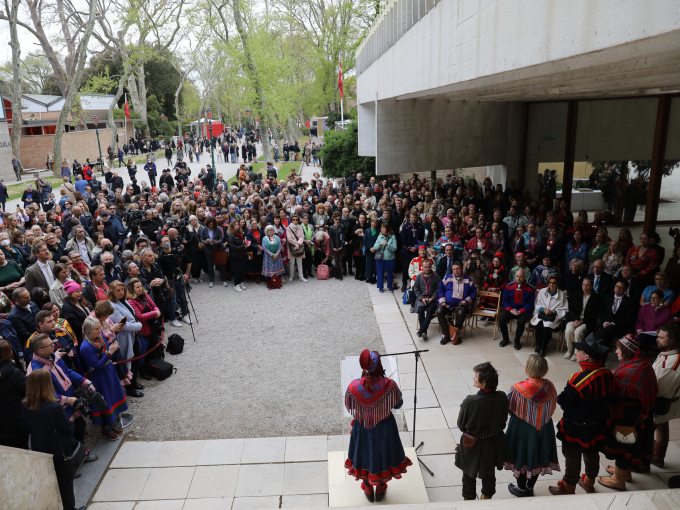 On Friday, Her Majesty The Queen was given a tour of the main exhibition. As she proceeded through the exhibition, the Queen met three of the four artists as well as Eva Skals Johnskareng, daughter of Aage Gaup’s wife, all of whom discussed the works on display. 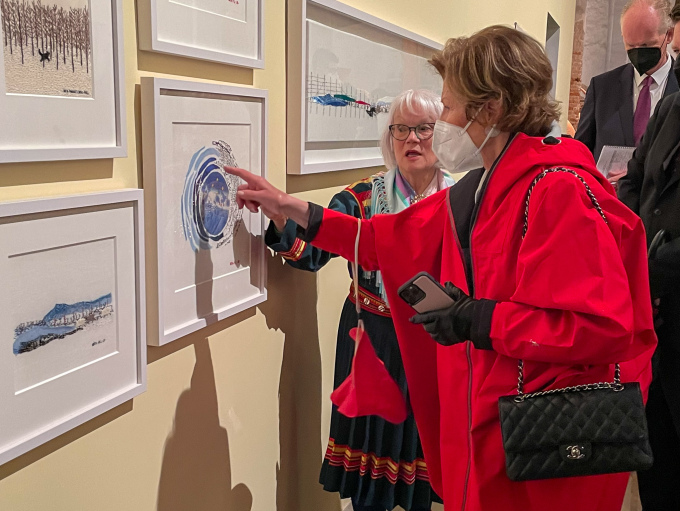 Queen Sonja was given an introduction to the works of Britta Marakatt-Labba, by the artist herself. Photo: Guri Varpe, The Royal Court

During her visit, the Queen attended a reception organised by the National Museum of Oslo and the Ministry of Foreign Affairs. The reception was held to help spread the word about the opening of the new National Museum in June.

The National Museum will collaborate with other major museums to bring Norwegian art out to the world and the works of international artists to Norway.