Yara Birkeland is the world’s first autonomous electric container ship. His Royal Highness The Crown Prince celebrated the christening of the unique ship along with its two 12-year-old "godmothers" and 500 other young people on Friday at the port in Brevik, on Norway’s south-eastern coast.

"I have been looking forward to this since I saw the first model of Yara Birkeland a few years ago. Now it’s here, and that’s a real pleasure," Crown Prince Haakon said in his remarks. To  the schoolchildren who were present, he added: 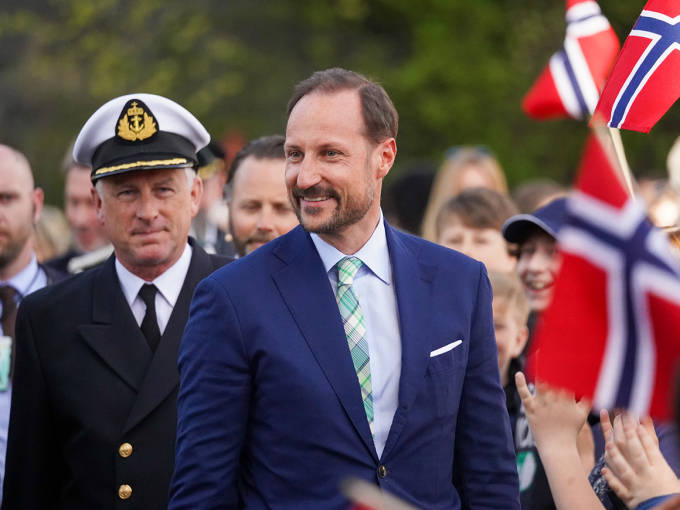 "This new container ship will take the place of 40 000 lorry trips a year – that’s 20 000 trips back and forth – through areas where many people live. That includes areas where you walk to and from school, hang out with your friends and take part in various activities."

Pupils from years five, six and seven at the nearby Brevik, Klevstrand, Grønli, Stridsklev and Sandøya Montesorri schools attended the event. Physicist Andreas Wahl entertained them with a science show and actor Gard Eidsvold depicted one of Norway’s foremost scientists, Professor Kristian Birkeland, for whom the ship was named. Norwegian Minister of Petroleum and Energy Terje Aasland was also one of the speakers.

The ship christening ceremony featured a giant champagne bottle made of ice. Pernille Gundersrud and Malene Moen Straume, both aged 12, had the honour of serving as godmothers. They were selected as representatives of the future – a future of which Yara Birkeland is a part.

"We christen you ‘Yara Birkeland’. May luck and good fortune be with you on your journeys, and may you inspire others in the fight for a better climate and environment," said the two godmothers, who had help from Andreas Wahl in controlling the ice bottle.

The ship will be operating on a route between Yara’s fertiliser plant on Porsgrunn’s Herøya island and the port terminal in Brevik.

Guided tour of the vessel

Crown Prince Haakon was given a tour of Yara Birkeland along with the godmothers, Porsgrunn Mayor Robin Kåss, Yara Chief Executive Officer Svein Tore Holsether and Mr Aasland. Also on board were CEO Thomas Wilhelmsen of Wilh. Wilhelmsen and CEO Geir Håøy of the Kongsberg Group, two Norwegian companies that collaborated with Yara on the ship’s development. 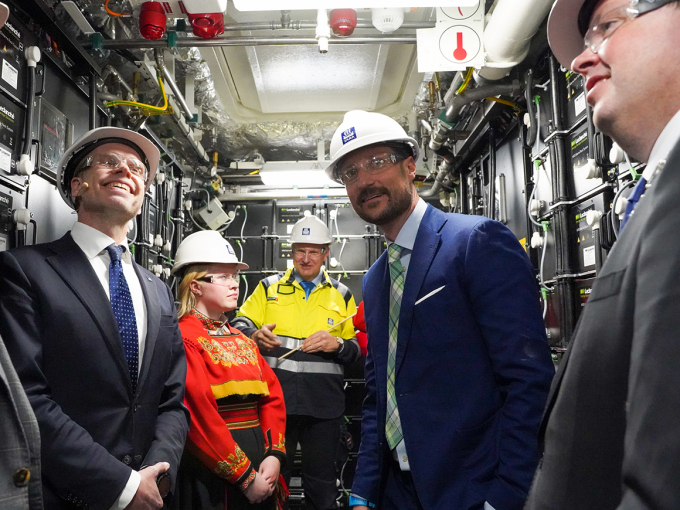 On a tour of Yara Birkeland – in the battery room. Photo: Liv Anette Luane, The Royal Court

Norway is at the forefront of green technology, particularly in the maritime industry, as Yara Birkeland demonstrates.

A visit to Yara’s fertiliser plant

The Crown Prince began his visit to Porsgrunn at Yara’s facility in the Herøya Industrial Park. Yara exports products from the plant to 90 countries. Fertiliser from Yara Porsgrunn is used in the production of food for some 40 million people every day. Yara Porsgrunn also supplies CO2 for industrial purposes as well as calcium nitrates for concrete production, odour removal and latex production. 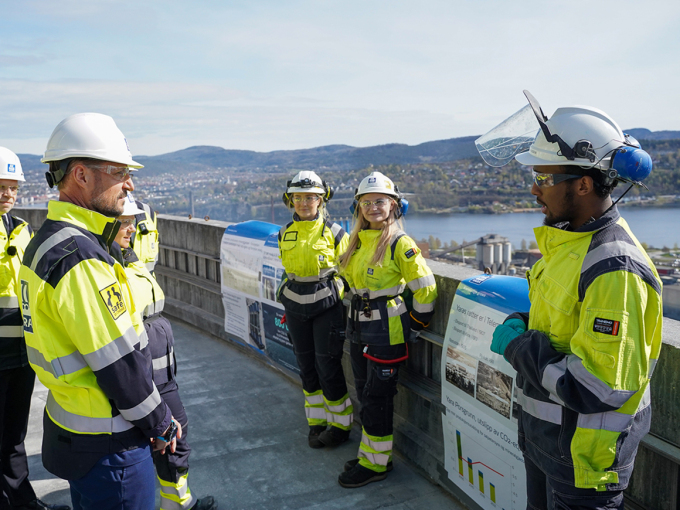 At the top of Yara’s prilling tower, 23 storeys up, the Crown Prince was shown around by plant manager Ole Jacob Siljan and trainees Hamza Hussein, Emma Sofie Steen and Sofie Hafredal. The Crown Prince listened to a presentation on Yara’s roots in the Telemark region as well as the company’s efforts to reduce greenhouse gases and its plans for the future. From the tower the Crown Prince enjoyed a fantastic view of Herøya Industrial Park and the Frierfjord, including most of the route that Yara Birkeland will sail.

Crown Prince Haakon also took the elevator down to the 15th floor to see the prilling tower’s interior and the production of mineral fertiliser. The tower was Norway’s tallest building when it was built in 1987. 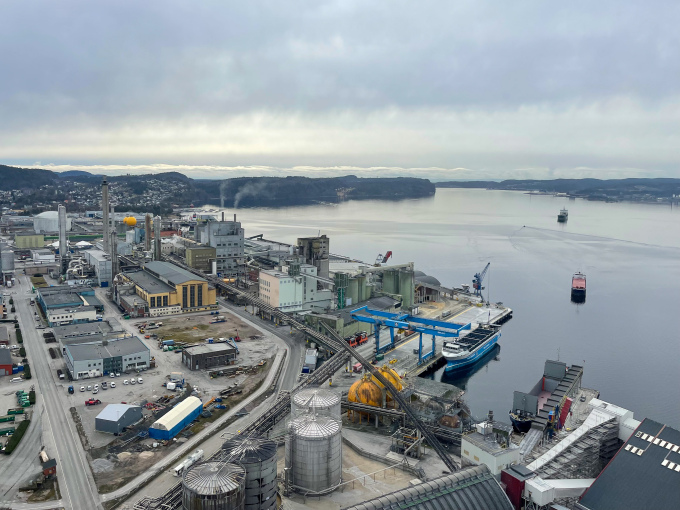 Yara Birkeland at dock alongside Yara’s fertiliser plant in Porsgrunn. View from the prilling tower, which was completed in 1987 and was Norway’s tallest building at the time. Photo: The Royal Court

During a working lunch at Adminiet, the meeting and conference centre on Herøya island, Yara CEO Svein Tore Holsether discussed the global situation, including the war in Ukraine, and the impacts of this on the food system. Later in the day, the Crown Prince focused on the same issue in his speech in Brevik.

“Today we face new, shared challenges,” the Crown Prince said. “Europe is anxious. We have a war in Ukraine. The ramifications are large and wide-ranging, including for you at Yara. The threat to world food production is serious, and Yara’s mission – to provide enough food for the world’s people in a climate-friendly way – has become more important and also perhaps more difficult.”