Her Royal Highness The Crown Princess was in attendance as the final set of memorial cobblestones commemorating Norway’s Jewish victims of the Holocaust was laid at Akershusstranda on the Oslo waterfront today.

The stumbling stones are a memorial to the victims of Nazism during World War II. Each stone measures 10 cm x 10 cm and represents an individual. The brass plate on the top surface is engraved with the victim’s name, year of birth, year of deportation and date and place of death. The stones are cemented into foot pavements in places where Jews and other victims of Nazism lived or worked at the time they were deported and killed.

The project is the work of German artist Gunter Demnig, who installed the first stone in Cologne in 1994. Since then, 75 000 stumbling stones (stolpersteine in German, snublesteiner in Norwegian) have been placed in 26 European countries – many of them by Demnig himself (source: Oslo Jewish Museum). 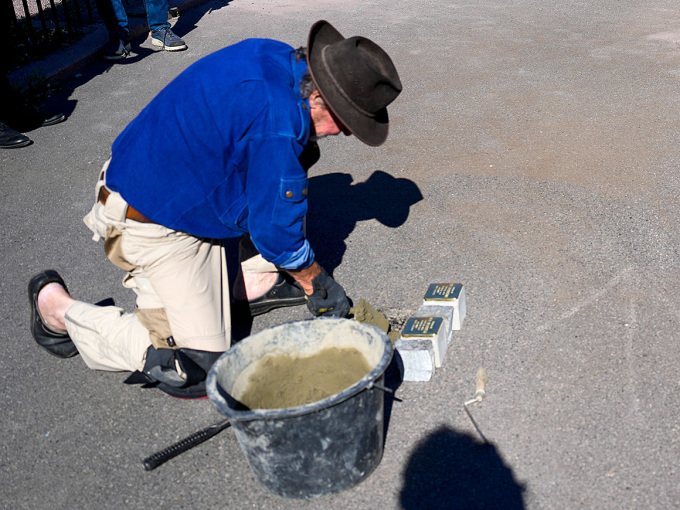 The project was brought to Norway by the Oslo Jewish Museum. The first stumbling stones in Norway were laid in 2010 at Calmeyers gate 15 in Oslo, the site of a former synagogue where the museum is now located.

Demnig’s art and memory project is grounded in a quote from the Talmud, a foundational text of Judaism: “A person is not forgotten until his or her name is forgotten.”

The three stones laid in today’s ceremony are in memory of Ernst Josef Adler, Fritz Gustav Löwy and Meta Hirschberg. Their biographies were read aloud after the stones were in place.

After the stumbling stones had been laid, Crown Princess Mette-Marit took part in an event at the Armed Forces Museum, where Harald Korn of the Jewish Community of Oslo read a prayer and Toril Holte, the director of the Oslo Jewish Museum, delivered remarks.

The Crown Princess read excerpts from “The Stumbling Stones”, a text by Ole Robert Sunde published in the anthology Hjemlandet (Homeland), which was edited by Geir Gulliksen and the Crown Princess.

The website snublestein.no provides the locations of all the stumbling stones for Jews deported from Norway, along with information about each individual.

The website also contains a form for reporting any damage to a stone, so it can be repaired or replaced.