Britain and the world at large bid farewell to Queen Elizabeth II today. An epoch spanning 70 years has come to an end.

Their Majesties The King and Queen were in attendance at the funeral ceremony in London’s Westminster Abbey and later in the day at the service in St. George’s Chapel at Windsor Castle, where Queen Elizabeth was laid to rest.

Flags were flown at half mast at the Royal Palace in Oslo as well as the Royal residences of Skaugum Estate, Bygdø Royal Farm, Stiftsgården in Trondheim and Gamlehaugen in Bergen until the ceremony at Westminster Abbey was concluded – at which time the flags were raised again to full mast.

The coffin of the late Queen was draped with the Royal Standard. The Imperial State Crown, Sceptre and Orb rested on top of the coffin along with a large, colourful wreath from King Charles III. A personal note written by the new King to his deceased mother accompanied the wreath: “In loving and devoted memory – Charles R”. 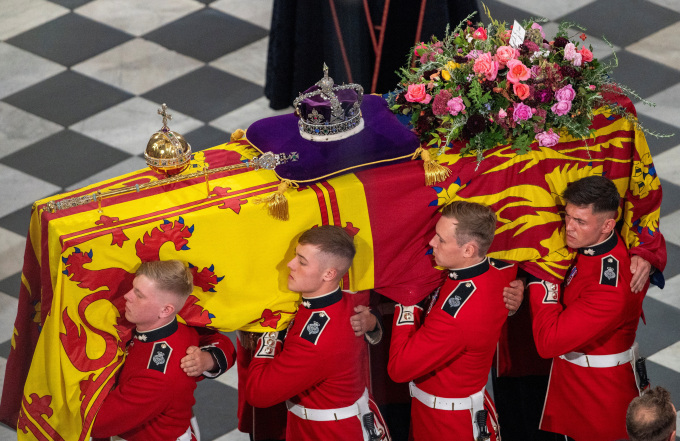 The British Imperial State Crown, Sceptre and Orb were laid on the coffin of Queen Elizabeth along with a large and colourful wreath from King Charles III. Photo: Reuters

Members of Royal families, heads of state and national leaders from all over the world attended the moving ceremony. Earlier in the day, the coffin was borne in procession from Westminster Hall to Westminster Abbey. His Majesty King Charles III and other members of the British Royal Family followed the coffin into the church to singing by the Choir of Westminster Abbey. The funeral ceremony itself was led by the Archbishop of Canterbury, Justin Welby, and the Dean of Westminster, David Hoyle.

More than 500 international members of Royal families, heads of state and other guests were gathered in Westminster Abbey to bid a final farewell to the British Queen, whose reign lasted more than 70 years.

The Queen’s family sat to the right of the coffin in the church. Prince George of Wales and Princess Charlotte of Wales were the youngest of Queen Elizabeth’s great-grandchildren present at the ceremony. King Harald and Queen Sonja represented Norway. The King wore the Norwegian Army’s gala uniform and bore the riband and star of the Order of the Garter ­– the most senior British order of knighthood. The order was founded in 1348 by King Edward III.

After the ceremony, the coffin was carried out of the church and placed on a gun carriage in preparation for the final stages of the funeral journey. From Westminster Abbey to Buckingham Palace, the gun carriage bearing the coffin was drawn by Royal Navy sailors. Behind the coffin walked King Charles, The Princess Royal, Vice Admiral Tim Laurence, The Duke of York, The Earl of Wessex, The Prince of Wales, The Earl of Snowdon, Peter Phillips and The Duke of Gloucester.

A hearse then transported the coffin from London to Windsor Castle. Many thousands of people lined the route to wish their Queen a final farewell. The Long Walk – a straight wooded avenue stretching 4.3 km from a statue of King George III to the gate of Windsor Castle – was adorned with bouquets of flowers brought to honour the deceased Queen. 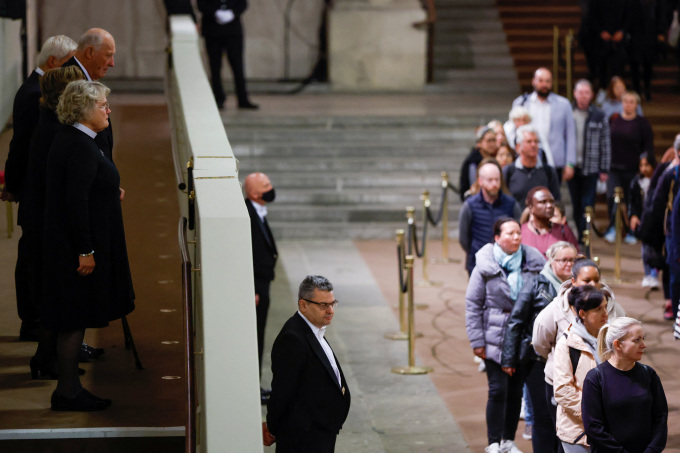