The Bird Room is one of the best known rooms of the Royal Palace, both because of its unique decoration and because it is the antechamber for those awaiting an audience with the King. Members of the Royal Family are also photographed here on ceremonial occasions.

In his plans for the Bird Room, architect Linstow wrote:

“The room … is where those granted an audience will be waiting. Since they often have to spend some time in this room the decoration of it should give pleasure and at the same time speak to all kinds of people. I therefore propose that the walls are painted with Norwegian landscapes. Since Norway is rich in beautiful scenery, this task should not be difficult.”

Johannes Flintoe was responsible for the decoration of the Bird Room, which was completed in 1843. Its theme reflects the contemporary currents of National Romanticism, the emerging national consciousness and the growing interest in Norwegian nature and history.

The Norwegians’ new sense of identity can be exemplified by the works of one of Norway’s most renowned painters, Johan Christian Dahl. In 1837 he produced a volume of prints featuring Norwegian stave churches, and in 1844, together with a group of other Norwegian artists, he established the Society for the Preservation of Norwegian Ancient Monuments.

The room gives the visitor the impression of being in an open garden pavilion. Through slim pillars entwined with hops the viewer looks out onto some of the best known and most impressive Norwegian prospects: Gaustatoppen, Vøringsfossen, Vedalsfossen, Jutulen, Kringen, Myrhorn, Filefjell, Drivdalen, Vindhella and Feigum.

A rich variety of Norwegian birds perch here and there about the pavilion - a total of 43 birds and six butterflies. A white-tailed eagle hovers on the ceiling.

The Norwegian Ornithological Society has counted 14 different species of birds in the room, in addition to one that cannot be identified. There are also four butterflies hidden among the leaves.

Other decorations have been inspired by the designs used in stave churches. This influence is apparent in the dragon ornamentation framing the wall panels and in the typical stave church portal painted above the console mirror between the windows.

Flintoe painted straight onto the plaster, which reduced the cost of the decoration; the cost estimate in the plans was just over 889 rix-dollars.

The floor in the room is wooden and has been painted light grey. The carpet matches the colour of the floor and features edging that echoes the wall decorations. The carpet does not extend all the way to the wall, revealing some of the floor surface.

Apart from the cleaning of the walls, no other changes have been made, either in the decoration or in the function, since the room was first built.

The specially designed furniture of the Bird Room dates back to 1846. It is made of oak, and consists of a console table and a mirror, two sofas and 12 chairs in the Neo-Renaissance style. The sofa and chairs have high backs and are upholstered in green plush.

The stave church portal framing the console mirror is surmounted by the Norwegian coat of arms. It was customary at that time to paint the coats of arms of Norway and Sweden side by side on official buildings, since the two countries formed a union, but Flintoe painted the Norwegian arms alone. King Carl III Johan was sensitive on this point, and it was presumed that he would probably prefer either both coats of arms or neither. In an attempt to avoid provoking the king, the committee responsible for the building of the Palace presented the following conclusion in its report:

“Question: Is the Norwegian coat of arms always shown side by side with the Swedish arms at the palace in Stockholm? Vote: If it is not possible to determine whether or not this is the case, the committee proposes that the emblem in the antechamber in the Christiania Palace remains as it is.”

And so it remained.

The light fixtures in the Bird Room were among the first in Norway to be powered by electricity. 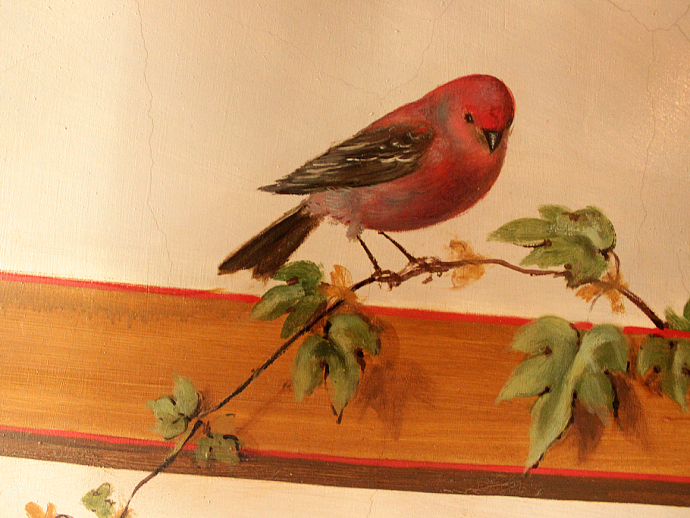