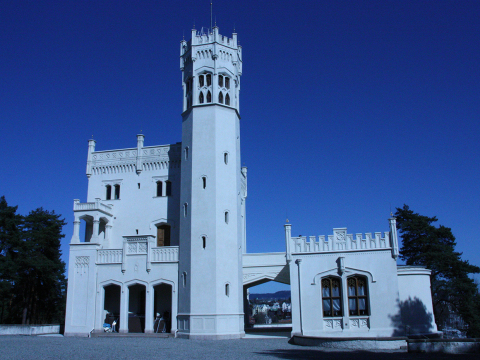 The summer palace of Oscarshall is located on the peninsula of Bygdøy in Oslo. The palace was commissioned by King Oscar I and Queen Joséphine, and was completed in 1852. Today it is the property of the state and is placed at the disposal of the King.

Many Norwegian contemporary artists received commissions during the building of Oscarshall, and today it stands as a monument to Norwegian art and applied art from the 19th century. The palace, with its secondary buildings and surrounding park, is considered to be one of the finest examples of Neo-Gothic architecture in Norway and is one of the country’s most important embodiments of the National Romantic style so popular in Norway during the period. In 1881, King Oscar II opened the palace to the public as a museum.

The palace is open to the public every summer.

Oscarshall summer palace is open to the public during the summer season. Visitors follow a guided tour. The surrounding park is open to all during the opening hours.

Oscarshall Summer Palace was built during the period 1847-1852, commissioned by King Oscar I.

The rooms of Oscarshall were decorated by Norwegian artists, and bear vitness to the Norwegian romantic nationalism that dominated the period.