The Crown Princess is especially concerned with improving women’s health and opportunities around the world. The cornerstone of these efforts is a project that she herself helped to establish: the Maverick Collective.

In 2010, the Crown Princess was appointed as a member of Young Global Leaders, a forum under the World Economic Forum in Davos. She was also invited to sit on the board of a network of its youngest leaders, known as the Global Shapers Community. This forum was established because over half of the global population is now under 27 years old – and it is therefore more important than ever that the voices of our young people are heard.

In the course of her international activities – and on the basis of her many years of work with HIV/AIDS – the Crown Princess saw a need to establish a targeted project to improve the health of young women around the world. During the Women Deliver conference in Copenhagen in May 2016, she launched the Maverick Collective in cooperation with Kate Roberts of Population Services International and Melinda Gates.

The Maverick Collective is organised as a kind of mentoring scheme in which each affiliated partner invests financial resources, time and effort to its designated project. The projects are administered by Population Services International in cooperation with local organisations. 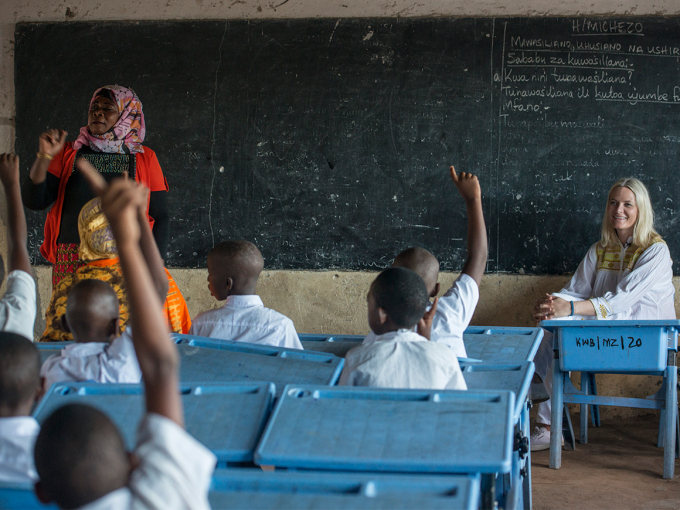 Ten-year-old Zubeda is a clever pupil and likes school. Education is the way out of poverty, but tuberculosis and a lack of food leaves her with little strength. Meetings such as this have given rise to the Crown Princess’s commitment to women’s health and opportunities. Photo: Henrik Myhr Nielsen, NRK

On the basis of the efforts of the Maverick Collective, the Crown Princess was named one of the Most Creative People in Business by Fast Company and one of the Leading Global Thinkers by Foreign Policy Magazine.

On official trips abroad representing the Norwegian Government and under the auspices of the Ministry of Foreign Affairs, Crown Princess Mette-Marit is concerned with improving women’s health and opportunities around the world. She also works in this area through humanitarian organisations such as the Red Cross and the Forum for Women and Development.