This week His Royal Highness The Crown Prince conducted a visit to Liberia on behalf of the United Nations Development Programme (UNDP), where he met with the victims and heroes of the Ebola virus outbreak in a country facing major challenges.

Although an end to the Ebola virus epidemic has been declared in Liberia, the country is still feeling the aftermath of the outbreak that claimed the lives of over 5 000 people. During his trip, Crown Prince Haakon was invited to the homes of victims and their surviving family members after the epidemic. He also visited the hospital where the first case of Ebola fever was discovered. In the course of his travels, the Crown Prince got a close-up look at the efforts of UNDP in the country and how the organisation works to ensure that Liberia also will achieve the UN Sustainable Development Goals by 2030.

Crown Prince Haakon has served as Goodwill Ambassador for UNDP since 2003.

On the first day of his trip, Crown Prince Haakon travelled to Paynesville City outside the capital city of Monrovia, where 18-year-old Patience lives with her aunt. The Crown Prince was invited to visit together with a small entourage. They sat down outside the aunt’s house, and Patience shared a story that made a great impact on the Crown Prince. First she lost her parents to Ebola; then she lost six siblings. Patience survived. She was lucky. After more than a week in the hospital, she pulled through.

Liberia is an extremely poor country with major healthcare challenges. As a result, this is one of the areas where UNDP and the UN in general have invested significant resources. Although this young girl suffered a crushing loss, she is attending school and therefore finds hope in a difficult situation. Patience changed schools some time ago, but she does not dare tell the people in her new school that she survived Ebola fever. The reason is that many Ebola survivors face intense stigmatisation by society at large.

This was also confirmed by a father whom the Crown Prince met later during his trip. The father is finding it hard to get work after it became known that he survived Ebola fever. This makes his life extremely difficult. He and his wife have taken in several orphans after the Ebola crisis, and they now have responsibility for nine children and almost no income. 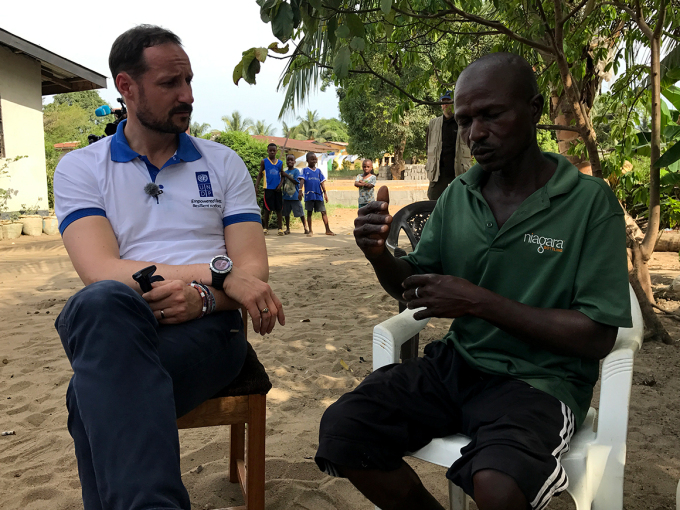 Ebola survivors face intense stigmatisation, which makes it difficult for them to find work. Photo: Christian Lagaard, The Royal Court.

During his trip, the Crown Prince shook hands with those he met, often with photographers present. These handshakes are important. Many in Liberia still do not know that it is unproblematic to have normal social contact with Ebola survivors. UNDP is working to eliminate the stigmatisation of Ebola victims. By meeting with the victims, the Crown Prince as Goodwill Ambassador can also help to support these efforts.

The Ebola epidemic led to a crisis in the Liberian healthcare system. During his visit, Crown Prince Haakon met with several employees of Redemption Hospital, which provides free services to the residents. The first outbreak of Ebola was diagnosed here.

The hospital director and several employees talked about the battle they waged against the disease. Some of their colleagues also paid with their lives. Employees died at many hospitals around the country while attempting to save the lives of others. On a guided tour of Redemption Hospital, the Crown Prince had the opportunity to meet both a nurse and a midwife who survived Ebola fever and still work at the hospital. Their description of the situation seems almost unreal for those who did not experience the crisis first-hand. 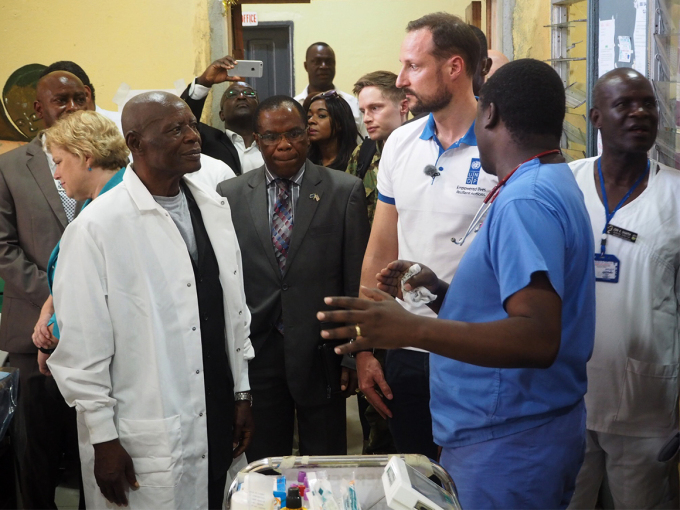 Half an hour’s drive from the hospital lies the town of Caldwell. The first cases of Ebola in Monrovia were discovered here, and the Crown Prince learned about how the disease spread from house to house. UNDP worked tirelessly here during the outbreak.

Paradise, now 21 years old, gave the Crown Prince a tour of the town. As a 19-year-old, he made a heroic effort in his neighbourhood as an active case finder. This meant that he and his colleagues went from door to door, searching for cases of Ebola and then ensuring the victims got treatment. At the time, the population had very little knowledge about the Ebola virus, and very few people dared to help those who might be infected. Some went so far as to nail shut the doors and windows of houses where they knew Ebola had broken out. Almost nobody delivered food and medicine to those lying sick in their own homes. But Paradise and his colleagues did. They received critical training from UNDP, but despite this, helping Ebola victims was not without risk. They provided invaluable assistance when few others dared to do so.

Crown Prince Haakon also had an opportunity to meet one of the country’s many strong women – Mrs Ellen Johnson Sirleaf, President of Liberia and Nobel Peace Prize Laureate. Despite difficult conditions, women have played a major role in creating peace following two rounds of civil war. On the first day of his visit, the Crown Prince met some of them during an event attended by women from various organisations. Here he highlighted the importance of enhancing women’s position in society and praised their work to promote peace and reconciliation. The topic of the meeting with the Liberian president included, among other things, the efforts of UNDP and Norway in the country and the upcoming election. Liberia will elect a new president in the autumn, and UNDP and the UN system will help to ensure that the election is free and democratic.

There was a lively meeting with the Pink Panthers, a group of women with their own motorcycle taxis. Traffic in the country is congested and is not regulated as it is in Norway. This is why it is important to have good driver education and safety equipment such as helmets and bright, pink jackets that are visible in traffic. UNDP provides both of these. In addition, the local police provide training to better equip the women to deal with attempted robberies. The Crown Prince talked with the women about what this job means to them: food on the table and schooling for their children, they responded. 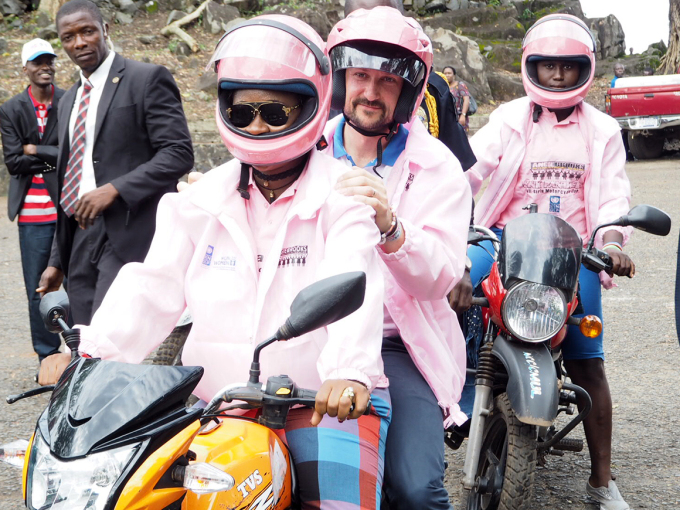 The Crown Prince went on a test drive with the Pink Panthers. He was given the pink helmet as a souvenir from Liberia. Photo: Christian Lagaard, The Royal Court.

Sustainable Development Goals on the programme

Countries around the world have joined forces to achieve the UN Sustainable Development Goals. UNDP’s efforts in Liberia are focused largely on cooperating with Liberian authorities to ensure that the country also achieves these goals, which apply to every country. Most of the projects that the Crown Prince toured during the trip deal precisely with this.

The Sustainable Development Goals reflect the three factors of sustainable development: climate change and the environment, economic growth and social conditions. The goals were a recurring theme in the lecture given by the Crown Prince to over 300 students at the University of Liberia. 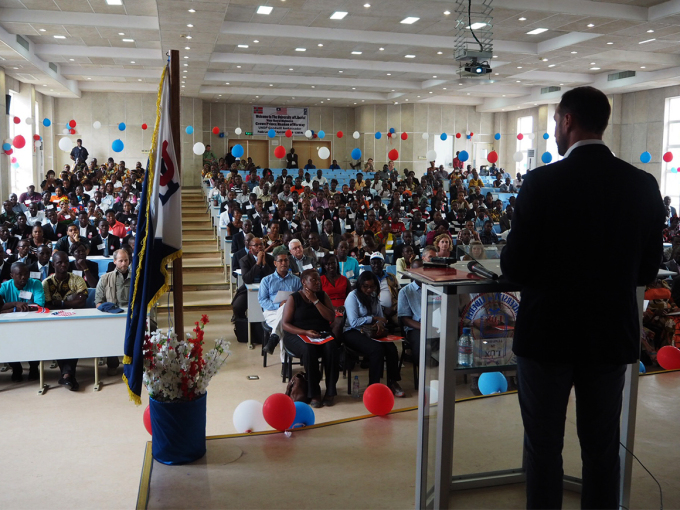 Crown Prince Haakon spoke about UNDP and the work to promote the UN Sustainable Development Goals at the University of Liberia. Photo: Christian Lagaard, The Royal Court.

In his lecture, the Crown Prince spoke about the efforts of UNDP, both in Liberia and throughout the world, emphasising the fight against poverty. He also discussed several of the projects he had learned about in his travels, showed photographs of the people he had met and shared their stories.

The stories show that Liberia is a country with enormous challenges, but also great hope. A hope that if we work together to achieve the Sustainable Development Goals, this will benefit not only Liberia but the global society as a whole.