The gala banquet held this evening at the Oslo Opera House in honour of the birthdays of Their Majesties The King and Queen concluded with spectacular fireworks.

The gala banquet marked the end of the two-day celebration, and King Harald and Queen Sonja gave a joint speech to express their thanks at the evening banquet hosted by the Government. The first event on the day’s programme for the King and Queen and their guests was a cruise on the Oslo fjord.

Luncheon on the fjord

This morning the King and the Queen invited their guests on a cruise of the Oslo fjord and a luncheon on board the Royal Yacht Norge. 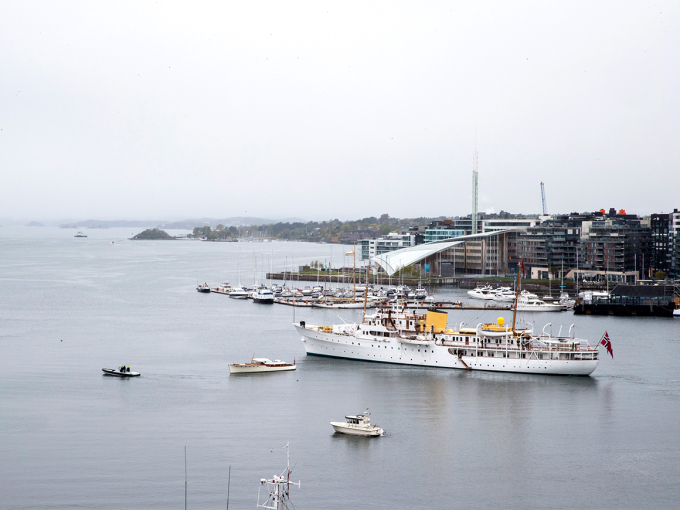 The Royal Yacht Norge heading out into the fjord with the guests on board. Photo: Vidar Ruud / NTB scanpix

Both the hosts and their guests were properly attired for the wet and cold weather conditions. They arrived at the Honnørbrygga dock at Oslo City Hall quayside at 11:00 am and were conveyed to the Royal Yacht. 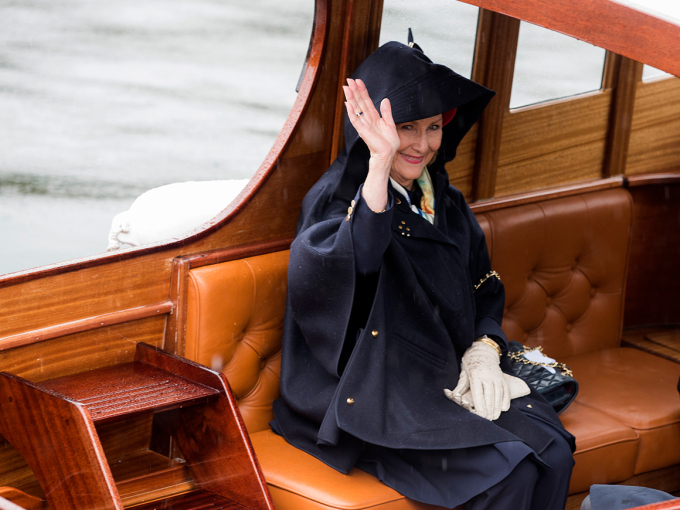 A 21-gun salute was fired from Akershus Fortress as King Harald boarded the boat that would take him out to the Norge.

His Majesty The King’s Guard started the procession to the Oslo Opera House, marching from the Royal Palace at 6:15 pm. At 6:30 pm they were followed by the royal guests from Norway and abroad in a motorcade.

Several different marching bands performed along the route, and when the guests arrived at the Opera House they were met with dance performances both inside and outside the building. Guests in formal attire took the time to greet the press as they made their way down the specially designed carpet. 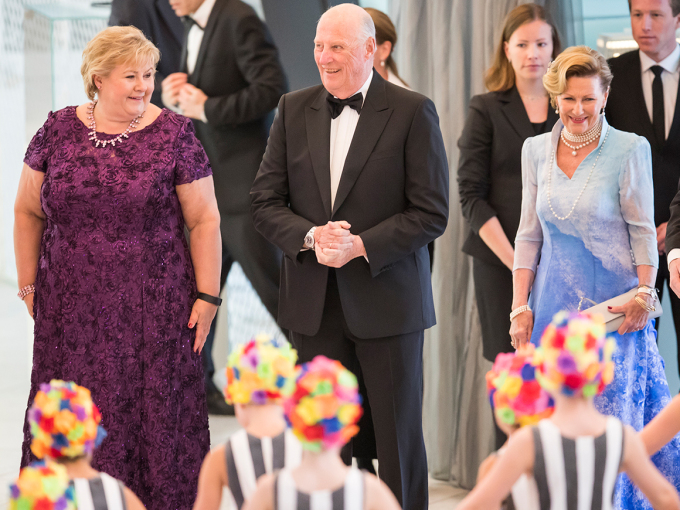 The banquet was attended by 270 guests. There were representatives of all of the counties, the Norwegian authorities and Norwegian society . The cultural and sport spheres were also well represented.

The Government chose to hold the banquet at the Opera House rather than at Akershus Castle, and included musical and dance performances as an important part of the experience gift to the King and Queen. The programme featured a large number of singers, musicians and dancers who performed before and during the banquet. The guests were treated to folk dance and ballet, choral groups and soloists, opera and tango. 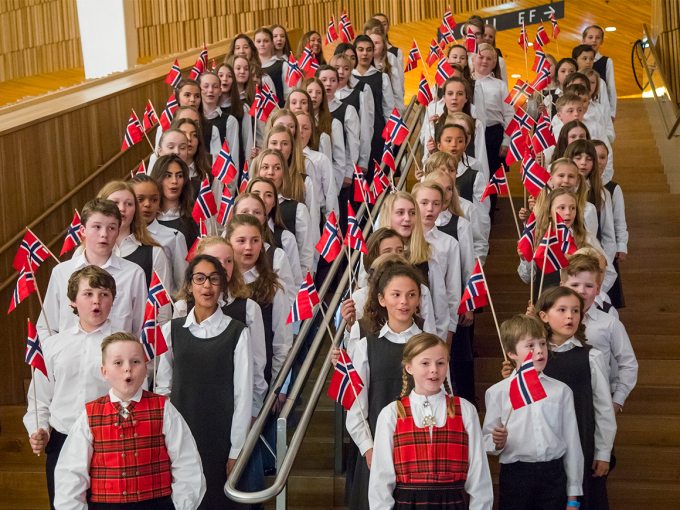 Two speeches were given to mark the occasion. The evening's host, Prime Minister Erna Solberg, gave the first one. 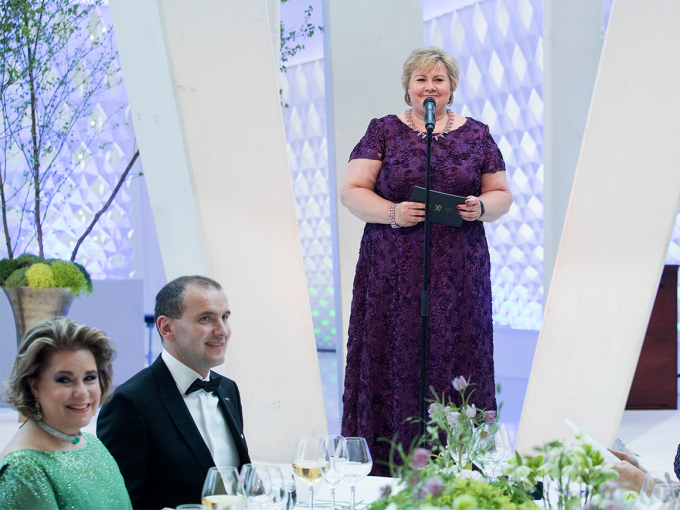 “As you all know, one of my tasks is to ensure that people can remain longer in working life, and I must say the King and Queen have certainly set a good example,” said the Prime Minister. She also thanked the King and Queen for their work as ambassadors for Norway: “for nature and culture. For the companies that our future depends on. For the people who live here.”

The Prime Minister also emphasised how the King and Queen provide ballast in the lives of the Norwegian people:

“In a world characterised by unrest, conflict and extremist views, you represent a unique continuity in our society. A constant in our lives. And we need that. You help to nurture an inclusive society characterised by trust, openness and generosity.”

Speech by the King and Queen

King Harald and Queen Sonja gave a speech together to thank the Government for the evening’s gift. Their Majesties also expressed how grateful they were to have a meaningful life in service and for the opportunity to be themselves, which they saw as critical to success. 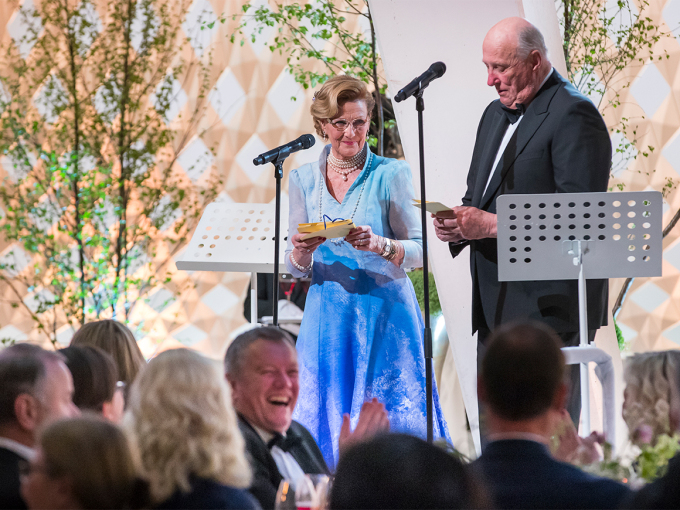 “What would my life have been these 80 years without the chance to define my own path and find my own meaning in my duties, my succession and my service?” asked the King. “It was certainly hard for my father to follow my highly esteemed grandfather. And it was difficult for me to follow my much-loved father. But I soon realised that the only way to do it was to do it my way. To be myself. That applies to all of us in life.”

Queen Sonja shared a similar experience:
“Through experience, time and the general evolution of society, I gradually came to understand that it was possible to combine being a queen and being myself, being Sonja. That, in fact, there was no way around it! I think we all need to feel coherence in our lives. We need a foundation, a sense of security to be able to develop ourselves.”

The King and Queen also thanked each other for invaluable support:

“Today I give thanks for the ability and support to carry out my role in a way that has felt right to me. I could not have accomplished this without my wife of nearly 50 years by my side. Today I would especially like to express my deep gratitude to the Queen.”

“I would also like to express my deep gratitude to the King this evening – even though he once called me a troll – for giving me the space to shape my official role in a way that is meaningful for me.”

Outside the Opera House the King and Queen and the other guests were treated to music, light and fireworks. Kayakers with lanterns paddled alongside the building in formation, and the evening was brought to a close with a fireworks display that lit up the sky. 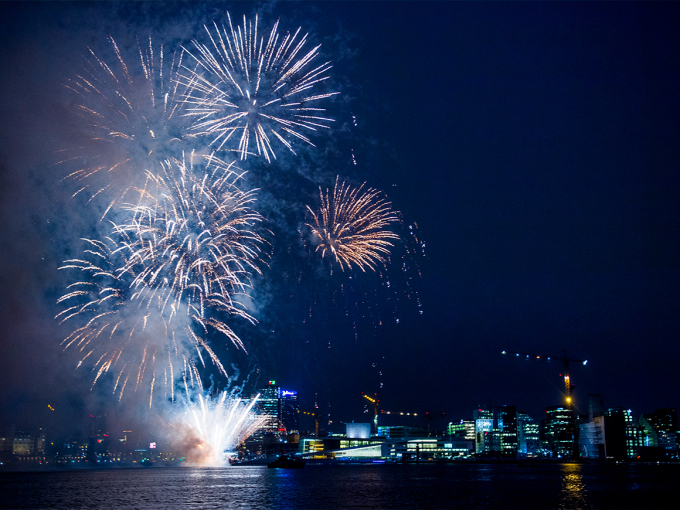 The gala banquet was concluded with a fireworks display outside the Oslo Opera House. Photo: Jon Olav Nesvold / NTB scanpix

Candles lit up the Palace Square as a surprise for the Royal Family on their return to the Royal Palace.