Today His Royal Highness The Crown Prince presented the Holberg Prize for 2017 to UK philosopher Baroness Onora O’Neill. She has received the award for her influential work in the field of moral and political philosophy.

Onora O’Neill is particularly renowned for her work on the philosophy of Immanuel Kant, bioethics, human rights, trust and communication ethics.

The Holberg Prize is awarded annually to scholars who have made an outstanding contribution to research in the arts and humanities, social science, law or theology. The prize amount is NOK 4.5 million.

Impact on the public sphere

The award was presented in a ceremony at the University Aula in Bergen. Crown Prince Haakon granted the Holberg Prize Laureate an audience prior to the award ceremony.

In its citation, the Holberg Committee writes that “[O’Neill’s] early work transformed our understanding of Kant” and points out that “O’Neill has had an enormous impact in the wider public sphere, both in the UK and beyond.” 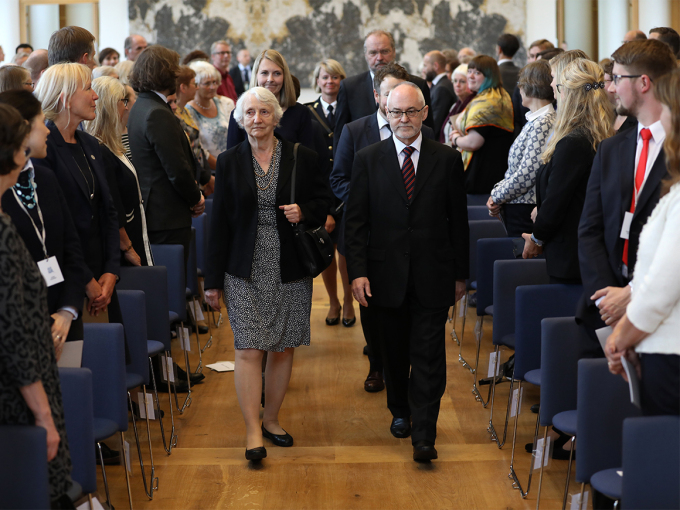 The Holberg Prize was presented during a ceremony at the University of Bergen. Photo: Emil Weatherhead Breistein / NTB scanpix.

In her acceptance speech, Professor O’Neill drew on Kant’s moral philosophy in addressing the ethical challenges that arise from new forms of communication:

“How are personal and democratic life to be protected in our new situation from those whose weapon is simply the dissemination of content?” the professor asked. “It is tempting to think that because we managed the transitions to writing and to printing, there are tried and tested ways of dealing with new challenges. But do we? Here perhaps philosophers and others should fear to tread: but perhaps we must be bold.”

As part of the ceremony in the University Aula, Minister of Education and Research Torbjørn Røe Isaksen presented the Nils Klim Prize for 2017 to Professor of Economics Katrine Vellesen Løken at the University of Bergen. She has received the award for her research on the Nordic welfare states, particularly in the areas of labour economics, health economics and family economics.

Dr Vellesen Løken became Norway’s youngest woman professor of economics in 2014, at the age of 31.

The Nils Klim Prize is awarded annually to a Nordic researcher under the age of 35 who has made an outstanding contribution to research in same fields encompassed by the Holberg Prize. The prize amount is NOK 300 000.