Marking ties to the Orkney Islands

Their Royal Highnesses The Crown Prince and Crown Princess paid an official visit to the Orkney Islands this weekend. There are strong historical ties between Norway and Orkney.

This year marks the 900th anniversary of the death of Magnus Erlendsson Orknøyjarl (Earl of Orkney). The earl died a martyr and was later canonised, ultimately becoming the patron saint of the Orkney Islands. The anniversary is being widely commemorated, also as part of the annual St Magnus International Festival, which is featuring a number of Norwegian musicians and performers this year. Crown Prince Haakon and Crown Princess Mette-Marit are visiting Orkney to take part in some of the events.

“We are struck by the rough beauty of your islands. The history, the cultural heritage, the landscape and the sagas of the Orkney Islands make a deep impression on us, and make us feel at home. It is as though an invisible silver string has somehow been spun between Orkney and Norway.”

The Orkney Islands saw a major influx of Norwegian settlers in the decades around 800 and were annexed by Harald Fairhair in 875. The islands remained under Norwegian rule until they were annexed by Scotland in the 1400s. There are still many words and place names that bear witness to a longstanding kinship, and it is easy for Norwegians to feel at home here. 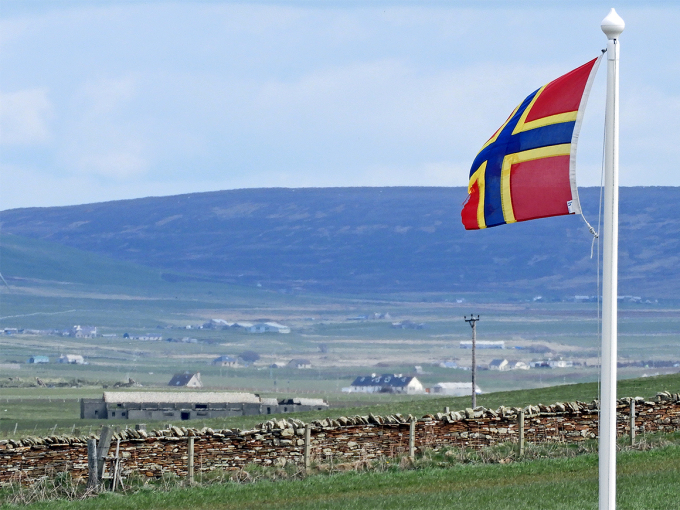 St Olaf Cemetery in Kirkwall is the final resting place of thirteen Norwegian seamen who died during the war. Members of a Norwegian special force who died when their plane crashed outside Kirkwall are also buried there. The cemetery was the first stop on the Crown Prince and Crown Princess’s programme today. 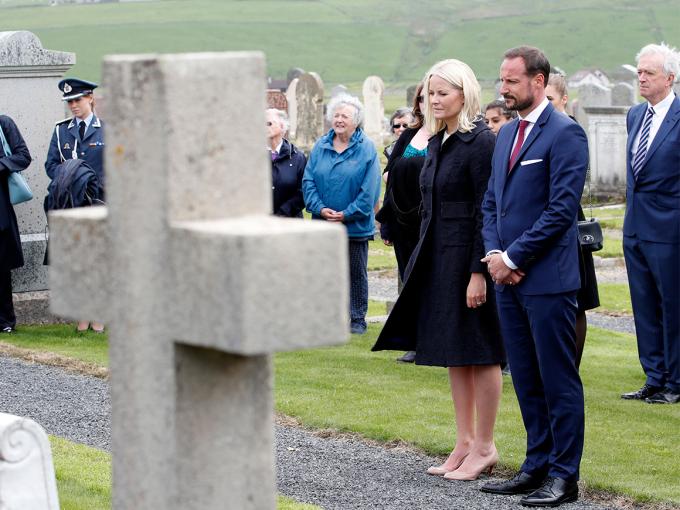 The official ceremony included speeches and bagpipe laments, and the Crown Prince and Crown Princess laid flowers at the graves.

Kirkwall is the capital and administrative centre of Orkney. Crown Prince Haakon and Crown Princess Mette-Marit were guests at a luncheon at Kirkwall Town Hall, during which the Crown Prince spoke. He stressed the close ties between Orkney and Norway, pointing out that Orkney celebrates Norway’s Constitution Day on May 17th each year, and Norway sends Christmas trees to Kirkwall every December. He also drew attention to St Magnus’s reputation for gentleness.

The Vikings were not primarily known for their peaceful solutions. St Magnus, said the Crown Prince, “was not your typical Viking earl”. The Crown Prince suggested that we may have something to learn from Magnus’ life:

“The saga of St Magnus is an inspiration to acknowledge that we always have a choice: To use violence or to seek peaceful solutions. To put people or power first. To try to do the right thing even if it has a cost.”

Following the luncheon the Crown Prince and Crown Princess departed for the beautiful Cathedral of St Magnus.

Crown Prince Haakon and Crown Princess Mette-Marit were entertained by young musicians from Hadhirgaan and Hear My Music outside the cathedral before they were given a guided tour inside. 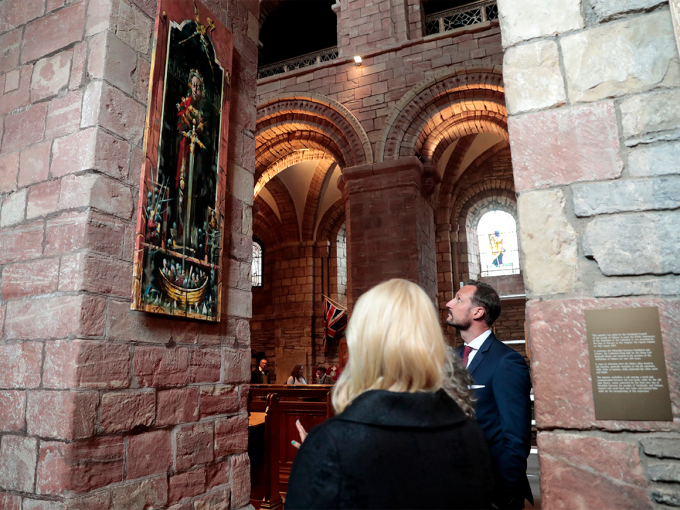 Speaking at the opening reception of the St Magnus International Festival several hours later, Crown Prince Haakon referred to the portrait of the saint by Norwegian painter Håkon Gullvåg:

"In this painting, I see a man who is difficult to grasp the essence of. He is looking at us, but also beyond us. It is if like he sees something no one else can see. As if he knows that his real power is beyond this world. And if we believe the saga, it was – as miracles started to happen on his grave.

St Magnus Cathedral was also the venue for the opening concert of the festival in the evening. The Crown Prince and Crown Princess attended the performance, “I, Pilgrim”, which features the music of Scottish composer Alasdair Nicholson and the words of Norwegian author Jon Fosse. The work was performed by the Trondheim Soloists and the BBC Singers. 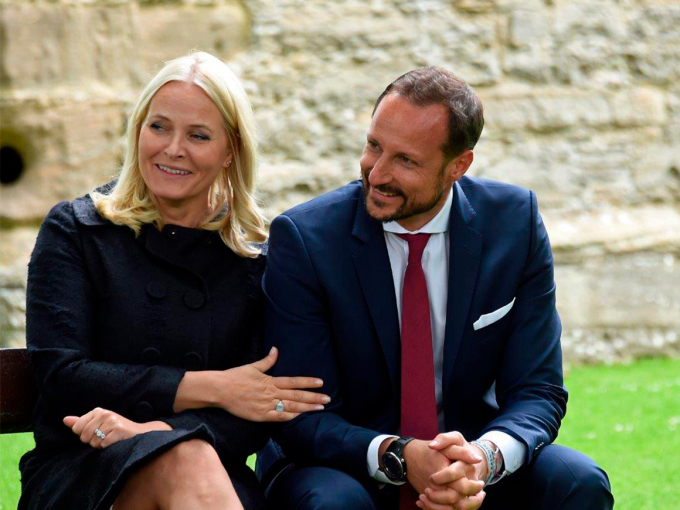 The Crown Prince and Crown Princess met the press during their visit in Kirkwall. Photo: Sven Gj. Gjeruldsen, The Royal Court

A number of other Norwegian artists and ensembles are performing at the festival, including the Norwegian Radio Orchestra and Bergen Cathedral Choir. Although music is the core of the programme, the festival also encompasses other art forms, such as drama, dance and literature. Some 2 000 visitors, corresponding to roughly 10 per cent of the population of Orkney, are expected at this year’s festival.

On Saturday Crown Prince Haakon and Crown Princess Mette-Marit will be visiting Skara Brae, a Neolithic settlement located on the Bay of Skaill.