The European surfing championship – Eurosurf 2017 – will be taking place over the next 10 days. The Crown Prince and Crown Princess and their family are at Borestranda in Jæren in southwest Norway to watch the competition.

This the first time Eurosurf has been held in Scandinavia. His Royal Highness Crown Prince Haakon is a member of the organising committee for Eurosurf 2917, and is one of many who have worked hard to make the event a success. Today was the kick-off of the championship.

Surfing is growing in popularity, both in Norway and internationally. Surfing will make its debut as an Olympic sport at the 2020 Summer Olympic Games in Tokyo. Nearly 100 of Europe’s best surfers from 11 different countries have convened at Borestranda in Klepp municipality on the Jæren coast.

Crown Prince Haakon enjoyed a fine day at the beach. In the morning he was given a guided tour of the area by the driving force behind the event, Tore Kramer, President of Norsk Surfklubb [the Norwegian surfing club]. 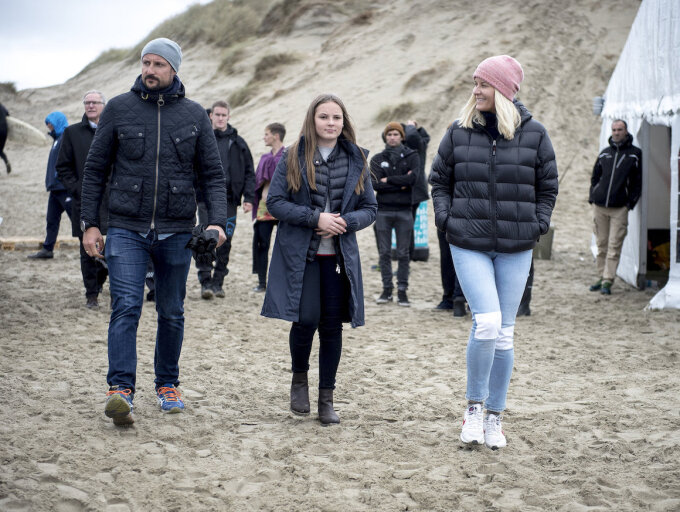 The Crown Prince also had the opportunity to greet several of the Norwegian athletes before they hit the water to compete. Later in the morning he was joined by Her Royal Highness Crown Princess Mette-Marit, Her Royal Highness Princess Ingrid Alexandra and His Highness Prince Sverre Magnus. Together the family watched the competition from the beach, cheering on the Norwegian surfers.

The official opening will take place this evening at Stavanger Concert Hall. Following a parade with all the participants, the Crown Prince will welcome the guests to the concert hall. Various speakers, entertainment and a concert are on the programme for the evening.

One of the objectives of hosting Eurosurf is to make Norway an even more attractive surfing destination internationally. Norway has a number of good surfing beaches, spectacular natural surroundings and clear, beautiful water. Many participants were impressed by the beauty of Jæren today. The championship will run through 16 October.