With Norwegian entrepreneurs in Texas

The technology and music festival South by Southwest attracts over half a million visitors annually. This year, His Royal Highness Crown Prince Haakon is on the guest list, along with entrepreneurs from Norway.

What began as a music festival in the late 1980s has grown to envelop new technology as well music and culture. Now it is one of the world’s largest gatherings of its kind.

A large delegation of Norwegian entrepreneurs, musicians and representatives of the music industry are attending the festival, and Crown Prince Haakon will meet many of them over the next two days. They are hoping the festival can open doors to one of the world’s most important markets, the USA.

The Crown Prince started the day with a business breakfast with Norwegian companies in the health technology field, known as “med tech”. The main topic around the breakfast tables was how Norwegian medical technology can help to make the world a better place.

More and more small and large start-up companies are finding success outside Norway. This morning local time the Crown Prince took the podium as part of the festival’s main programme to speak about precisely this: Why are Norwegian entrepreneurs doing so well?

Norway is a safe country with a healthy economy, low unemployment and well-developed welfare schemes – a very secure place to hold a regular job. Yet every year, thousands of Norwegians invest all their free time and savings to pursue good ideas and become entrepreneurs. What lies behind this?

Crown Prince Haakon also touched on how the UN Sustainable Development Goals can provide a starting point for those looking to start up a company. They can help to target ideas that can solve very specific problems. He asked two Norwegian companies to tell their stories. Both have developed products that address global challenges, and have gained international attention:

Pitching ideas is an important element at festivals such as this. Selected companies are given a few minutes each on stage to communicate their good ideas to an audience of international investors and partners. The Nordic countries have decided to collaborate on a Nordic Pitch this year, and Crown Prince Haakon made the opening remarks on their behalf. 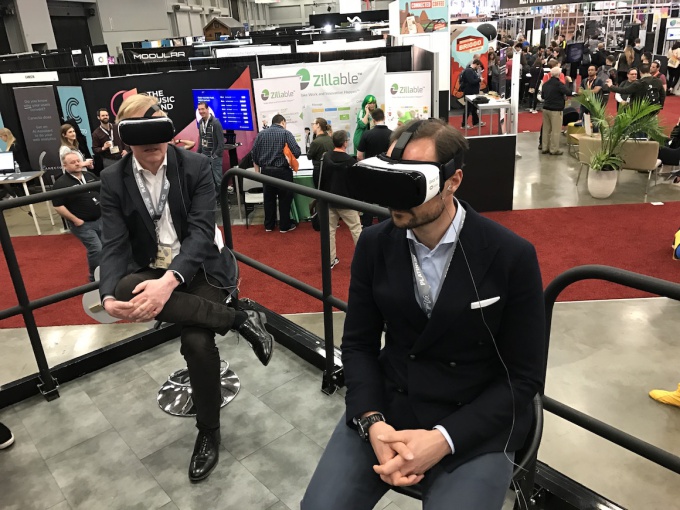 Crown Prince Haakon and the Norwegian ambassador tries out VR at the tech fair. Photo: Christian Lagaard, The Royal Court.

The Crown Prince also spoke with Norwegian and international media today to report on Norway’s activities during this year’s festival.

Tomorrow the Crown Prince Haakon will shift focus from technology to music. Music Norway is hosting a networking luncheon where US and Norwegian music industry movers share their experience and ideas informally. The Crown Prince will also meet Norwegian musicians and attend one of the many concerts.