Sounds from Norway in Austin

Today it was the music industry’s turn to take centre stage in Austin, Texas. His Royal Highness Crown Prince Haakon took part in the efforts to promote Norwegian music at the South by Southwest festival.

Yesterday the focus was on Norwegian innovation and entrepreneurial activities. Today the spotlight was on Norwegian music and music industry. The Crown Prince participated in several events, but the first item on his programme was a visit to the Governor of Texas, Mr Greg Abbott. Norway and Texas have a history of close cooperation in areas such as security and energy, and their collaboration continues to expand.

Music filled the air at the informal networking luncheon hosted by Music Norway for the Norwegian and US music industry at House of Scandinavia. Norwegian performing artists were also in attendance and shared their experiences. They had taken part in the music workshop in connection with the South by Southwest festival and treated the crowd to several songs created at the workshop.

The gathering provided a setting for making new contacts and learning about what it takes to enter the US music market. 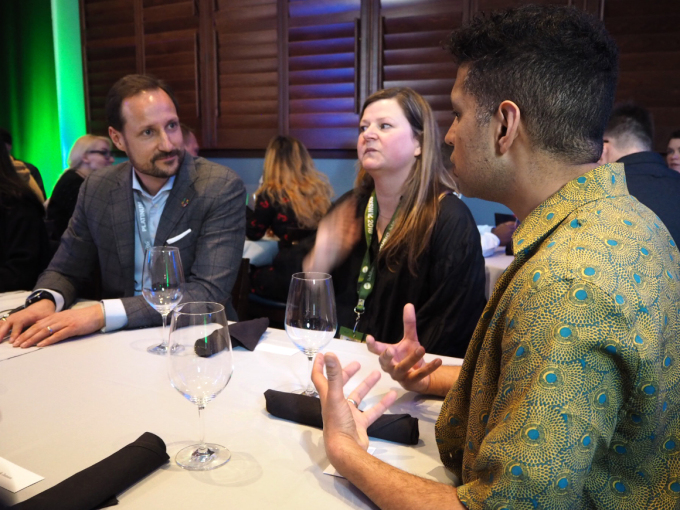 Luncheon with members of American and Norwegian music industry at House of Scandinavia. Photo: Christian Lagaard, The Royal Court

Afterwards the Crown Prince Haakon was given a guided walking tour along the historic 6th Street in the heart of Austin’s entertainment district. The tour offered insight into what participating in the SXSW Music festival entails.

Technology and innovation remained on the agenda today as well. The Norwegian company Kahoot! has established an office with several employees at Capital Factory, Austin’s large incubator for young technology start-ups. Kahoot! is a computerised tool used extensively in schools and teaching in general, in which the learning takes place through online challenge contests.

The Austin office has been a success, and today the company demonstrated its “Kahoot! Plus” for the visitors.

This evening local time, Crown Prince Haakon will attend the concert Sounds from Norway at the Elysium nightclub. This is an annual South by Southwest event where new Norwegian artists perform in front of an international audience that includes representatives of record companies, agents, music collectors and music journalists.

This evening features the duos Aiming for Enrike and Ask Carol, the Oslo band Hajk, as well as Idk Ariel, Sassy 009 and L/O/O/N. Each act is given 40 minutes of stage time. The Crown Prince will also meet the musicians during the concert.