Major conference on the world’s oceans

What can the global community do to promote cleaner oceans and sustainable use of resources? The Crown Prince attended the conference Our Ocean 2019 that concluded in Oslo this afternoon.

The oceans and their resources are under threat from pollution and climate change. His Royal Highness Crown Prince Haakon took part in the Our Ocean 2019 conference today. Hosted by the Government, this international conference brings together 500 leaders and scientists from all corners of the world. Scientists play a key role in generating the knowledge needed to enable us to limit pollution and overexploitation of the world’s oceans.

Let's unite behind the science.

The conference was opened yesterday by Minister of Foreign Affairs Ine Eriksen Søreide. Crown Prince Haakon gave the opening remarks today, recounting his impressions from his trip to the Pacific Ocean earlier this year. The island states there are among those now dealing with the impacts of climate change on the oceans.

Crown Prince Haakon emphasised the need to restore balance to the oceans. He also focused on their great potential for providing food, employment and the role the oceans can play in mitigating climate change. For despite the seriousness of the situation, the Crown Prince is optimistic. According to a new report, a significant proportion of the reductions in greenhouse gas emissions the world needs by 2050 can be achieved in the oceans.

But we must be willing to accept change in the ways we live, the Crown Prince stressed.

"To move the world in the right direction we must stay open to change that might include sacrificing ways of living that we have taken for granted. That can be daunting, but also exiting and rich on opportunity. Ladies and gentlemen,
Because the ocean carries us, we must carry the ocean."
Kronprins Haakon

Crown Prince Haakon met with a number of ministers, scientists and environmental activists at the conference today. As a coastal nation, Norway has an important international role in efforts to promote cleaner oceans. Together with eight other donor countries, Norway has been a driving force behind the establishment of the PROBLUE multi-donor trust fund under the World Bank. The fund seeks to achieve clean, sustainable oceans by focusing on fisheries management, combatting marine pollution, and encouraging the sustainable development of maritime activities and integrated management of marine and coastal areas.

The Our Ocean Youth Leadership Summit – known as Bootcamp – is a summit for young people that has been organised alongside the main conference. Participants design projects for achieving cleaner oceans. Crown Prince Haakon followed closely as some of the 25 working groups presented their proposals, and he had the honour of announcing the winning project.

The Crown Prince presented the prize to the group with the winning project. Photo: Sven Gj. Gjeruldsen, The Royal Court.

Before the final segment of the youth conference, Crown Prince Haakon and a group of youth delegates visited Oslo Central Station, where an exhibition has been opened in connection with the conference. 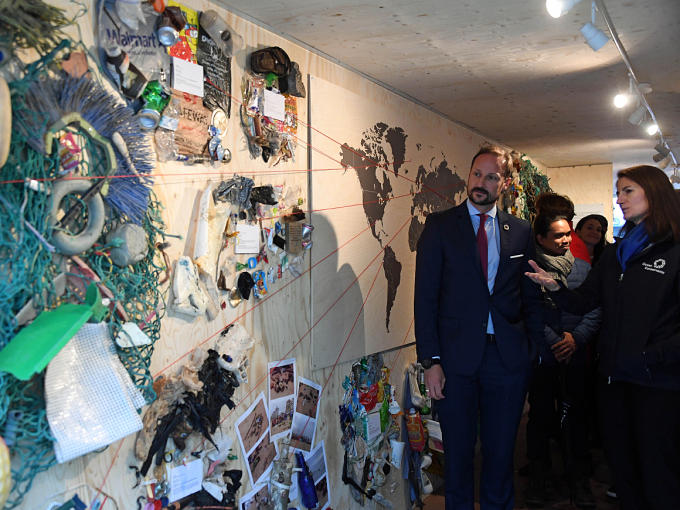 Crown Prince Haakon visits the exhibition in which marine litter from around the world has been brought to Oslo Central Station. Photo: Sven Gj. Gjeruldsen, The Royal Court.

Our Ocean Art Container is free of charge to the public and is open through Saturday, 26 October.

At the core of the Our Ocean conferences are voluntary commitments. Governments, business and civil society announce actions to be carried out within the six topics of climate change, marine pollution, marine protected areas, sustainable fisheries, maritime security and the Blue Economy. 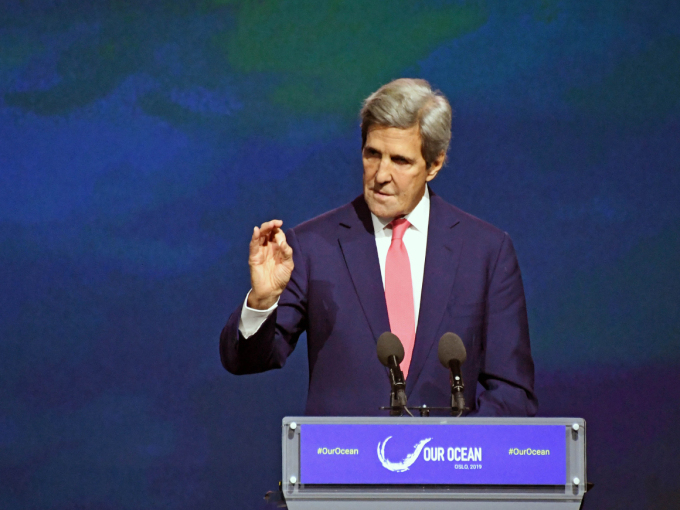 Former US Secretary of State John Kerry was a driving force behind the start of the Our Ocean conferences. He also took the podium in Oslo today. Photo: Sven Gj. Gjeruldsen, The Royal Court.

In 2018 the Our Ocean conference was hosted by Indonesia. In 2020 the event will move to a Pacific Ocean venue, as the island state of Palau has taken on the role of next year’s organiser.