His Royal Highness The Crown Prince had a busy programme in Mozambique today. Business and trade opportunities, women’s role in the peace process and access to electricity were key areas of focus.

Opportunities for business cooperation were first on the agenda during the Crown Prince’s second day in Mozambique. After a working breakfast attended by government ministers and business leaders from both countries, Crown Prince Haakon spoke at the opening of a major business seminar.

Representatives of the Norwegian and Mozambican business communities convened for a seminar in Maputo. To date not many Norwegian companies have been active in Mozambique, but interest is growing – especially in the energy sector, where cooperation on gas and solar energy is already established. 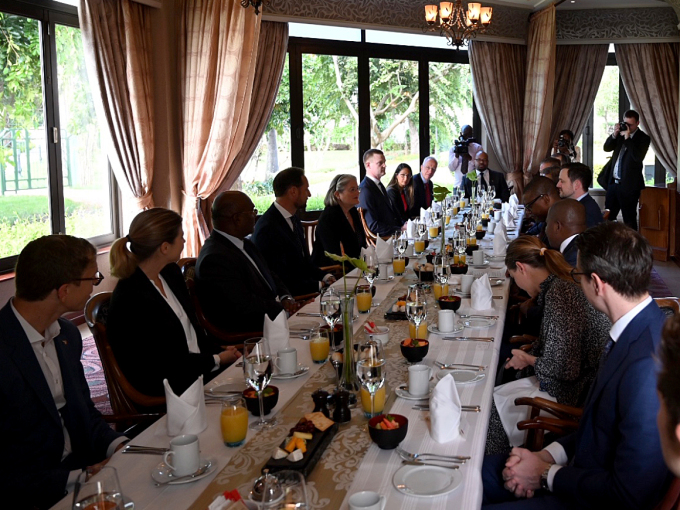 The day began with a breakfast meeting with government and business representatives from Norway and Mozambique. Photo: Sven Gj. Gjeruldsen, The Royal Court

Like Norway, Mozambique has abundant energy resources. Sound management of these resources may play a major role in solving the challenges Mozambique faces.

Crown Prince Haakon noted that the Norwegian model of energy resource management has led to increased prosperity for the entire society:

“My country’s vast energy resources, both renewable and non-renewable, have brought us prosperity, because we have given priority to the sound management of these resources. They have also formed the basis for the development of world-class technology, which is crucial for the further development of the energy sector.”

Norway has accumulated a wide range of experience that can benefit Mozambique.

Mozambique has experienced a number of periods of unrest and civil war. The two parties to the most recent conflict, the governing FRELIMO party and the opposition RENAMO party, entered into a peace agreement on 6 August 2019.

Women and children suffer greatly in times of conflict and unrest, and if there is to be a secure and lasting peace, women will need to play a significant role in creating it. Mozambique and Norway are working together to increase women’s participation in conflict resolution. Their participation will be crucial as the peace agreement is implemented. 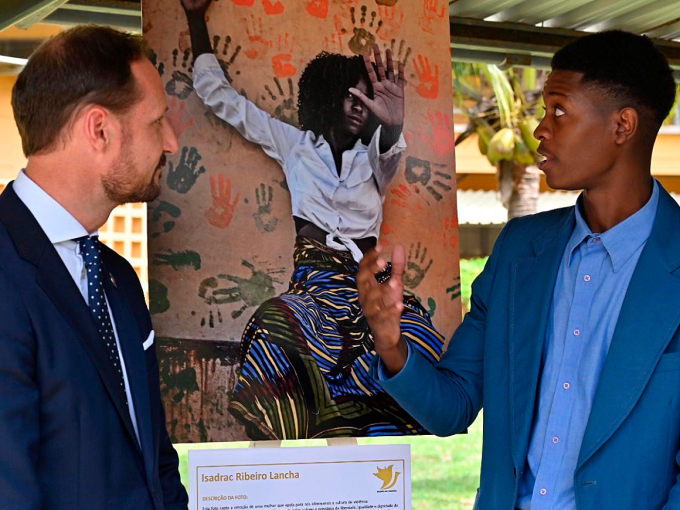 Crown Prince Haakon in conversation with one of the photographers behind an exhibition on women and conflict. Photo: Sven Gj. Gjeruldsen, The Royal Court

The Crown Prince spoke this morning at the opening of the seminar Women, Peace and Security:

“In any society, the involvement of women is key to successful development. When women are – more or less systematically – prevented from participating in the political, social and economic life of their country, the whole population loses out. The inclusion of women on all levels is also an essential part of a peace-building process. That is what this seminar is all about.”

A special photo exhibition is on display in connection with the seminar, marking the 20th anniversary of UN Security Council Resolution 1325 on women, peace and security. The exhibition documents the lives of women affected by war and other forms of conflict. Crown Prince Haakon had the opportunity to speak with women who wished to share their stories, and to hear how they view the opportunities and challenges of the peace work that lies ahead.

Access to energy is fundamental to economic and social development and is thus a major factor in the fight against poverty. Eliminating poverty tops the UN’s list of Sustainable Development Goals and has been an issue of active concern to Crown Prince Haakon in his role as goodwill ambassador for the UN Development Fund (UNDP). 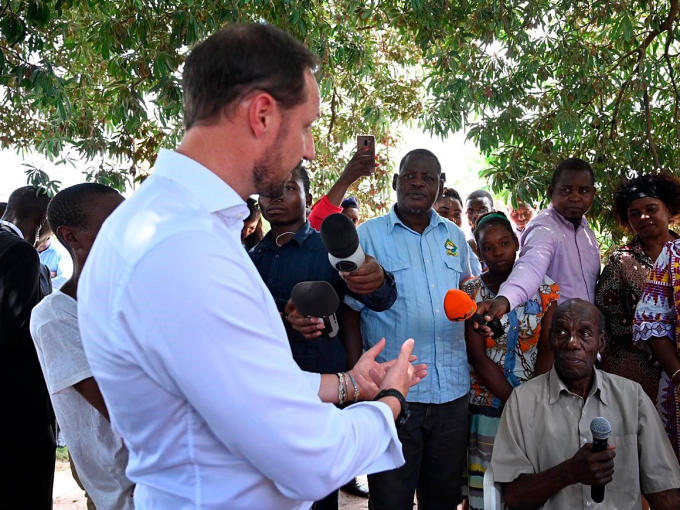 Crown Prince Haakon in conversation with the village’s oldest resident. Connecting to the power grid will bring major changes and many opportunities. Photo: Sven Gj. Gjeruldsen, The Royal Court

Less than 30 per cent of Mozambique’s population has access to electricity. In 2018 the President launched an ambitious project, “Energy for all”, to provide electric power to the whole population. The programme is supported by Norway, and the Crown Prince was in attendance today as two new households were connected to the mains.

Crown Prince Haakon met with the Sitoe family, whose home received power today. The Crown Prince had the honour of switching on the light, which will change everyday life for the family of six. 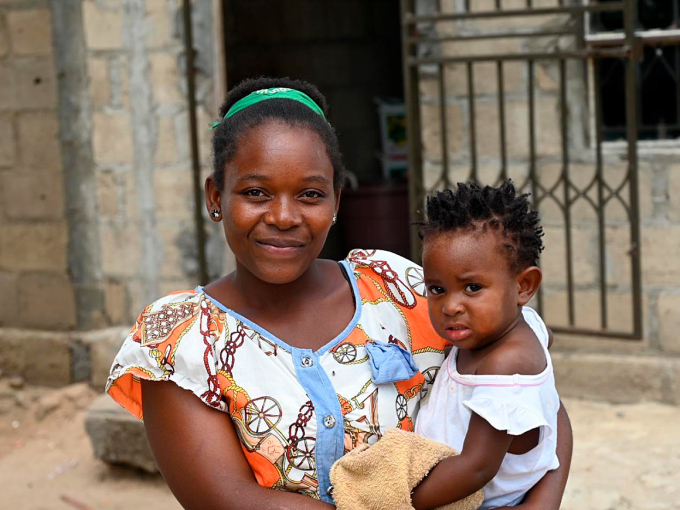 Belmira Americo Sitoe with Armando, the youngest of the family, outside their home in Matlemele. Today the home got electric power. Photo: Sven Gj. Gjeruldsen, The Royal Court

The solar power plant in Mocuba began operations in August 2019 and is the first large-scale solar generating facility in Mozambique. It is also the largest in sub-Saharan Africa outside of South Africa. The plant, which can serve more than 175,000 households, was developed cooperatively by Scatec Solar and Norfund KLP of Norway and Mozambique’s EDM power company.

Crown Prince Haakon’s visit to Mozambique ended with a reception in Maputo hosted by the Norwegian embassy. The event took place at the Fisheries Museum, which was built in 2008 in a Mozambican-Norwegian-Icelandic collaboration.

In the entranceway was an exhibition focusing on the many years of cooperation between Norway and Mozambique. There were speeches and artistic performances, and the menu featured seafood from the culinary traditions of both countries. 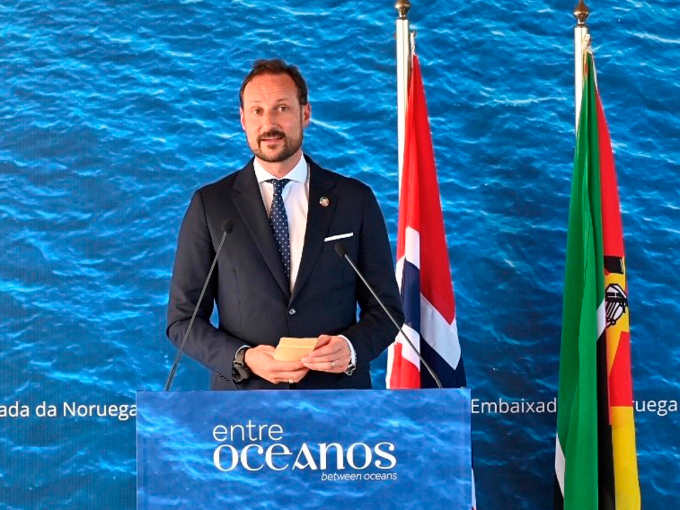 The Crown Prince delivers the concluding speech at the reception in Maputo. Photo: Sven Gj. Gjeruldsen, The Royal Court

The Crown Prince gave the final speech of the trip. He concluded by emphasising Mozambique’s vast potential and Norway’s desire to help to realise it.

“In closing I would like to remind us all: Mozambique has immense potential. You have an abundance of natural resources, including metals, minerals, fertile soils and ocean-based resources, and you have a strong and resilient people, which of course is the most important key to development. Taking our long history of cooperation and broad partnership as a basis, Norway would like to work with you in realising this potential further.”

Mozambique is one of the world’s poorest countries, and faces major challenges. Development assistance from Norway to Mozambique is important, but cooperation and partnership are growing in a number of major areas.

Norwegian business activity has been modest, but interest is on the rise – especially in the energy sector. Large gas discoveries off the coast could turn Mozambique into a major global supplier of energy. 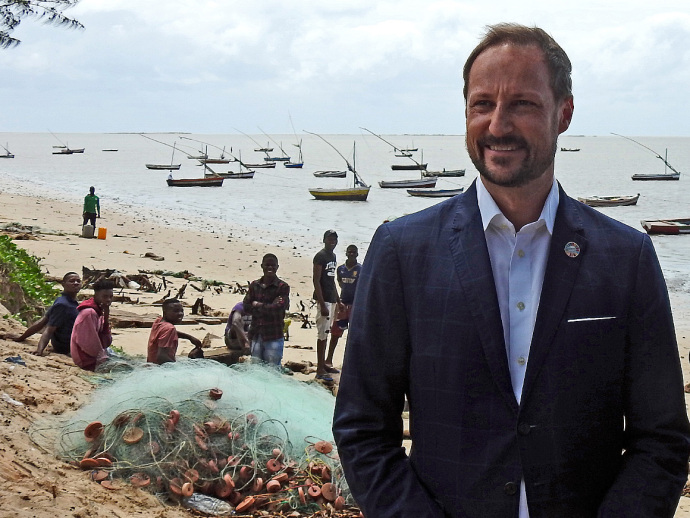