Gave thanks to war veterans and survivors

His Royal Highness The Crown Prince gave thanks to war veterans and survivors for their efforts in support of Norway during World War II. “On behalf of the Royal Family and the people of Norway, I want to say thank you.”

Together with His Majesty The King and Her Highness Princess Astrid Mrs Ferner. the Crown Prince took part in the Government’s luncheon marking the 75th anniversary of the liberation of Norway.

Veterans and survivors of World War II were invited to a luncheon at the Opera House in Oslo.

In the morning, the Royal Family and all the guests were welcomed by Prime Minister Erna Solberg. The Staff Band of the Norwegian Armed Forces played while the guests were arriving at the Opera House.

The luncheon was originally planned to be held in 2020 to mark the 75th anniversary of the liberation of Norway from the German occupying forces, but was postponed due to the coronavirus pandemic.

The 170 guests were served a three-course meal that began with seafood salad and fish roe, followed by a main course of baked hake with mashed root vegetables, red wine gravy and duchess potatoes. Dessert was berry mousse cake with fresh Norwegian berries.

“Today we are gathered here for two main reasons. The more important is to thank you. On behalf of the Royal Family and the Norwegian people I want to say: thank you for everything you have contributed, and everything you have sacrificed, so we can live in a free country,” Crown Prince Haakon said in his speech during the Government’s Liberation Luncheon.

“The other reason is to promise you – and ourselves –that we who did not experience the war will tell future generations your stories. Not just as historical information, but as a dynamic discussion of the values that these stories illustrate for us today – so we will never forget what thousands of people in our country suffered and sacrificed their lives for,” he continued. 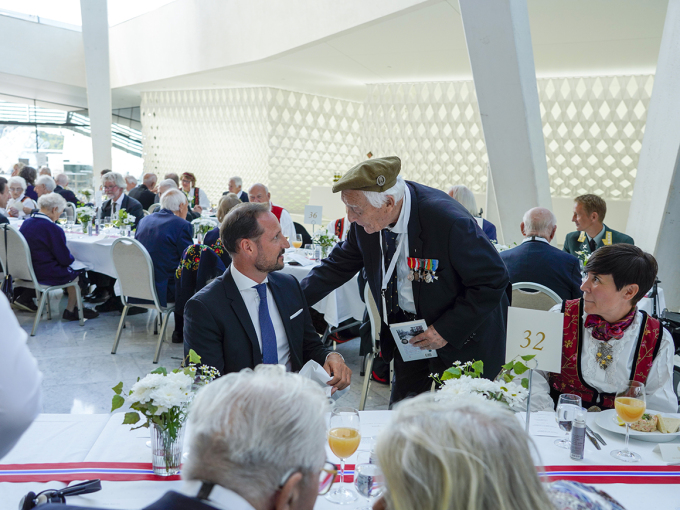 Prime Minister Erna Solberg also spoke during the luncheon. Poet Per Vollestad read a poem about the war sailors, accompanied by the music of the Staff Band of the Norwegian Armed Forces. The band then played songs of the partisans.

Resistance fighter August Rathke (95) gave a speech on behalf of the war veterans and survivors. Mr Rathke, who sat at the Crown Prince’s table during the luncheon, was a member of the commando raid organisation Linge Company and the sabotage group Saborg. He is now the only surviving member of the Linge Company.

After Mr Rathke’s speech, opera singer Eli Kristin Hansveen performed the legendary “We’ll Meet Again”. This song is associated with World War II, and is about the soldiers who are going away to fight – and about their families and loved ones. The song helped to inspire belief in the future at a time when many soldiers would not survive the war and would never see their loved ones again. The lyrics could thus also be interpreted as a promise that they would meet again. 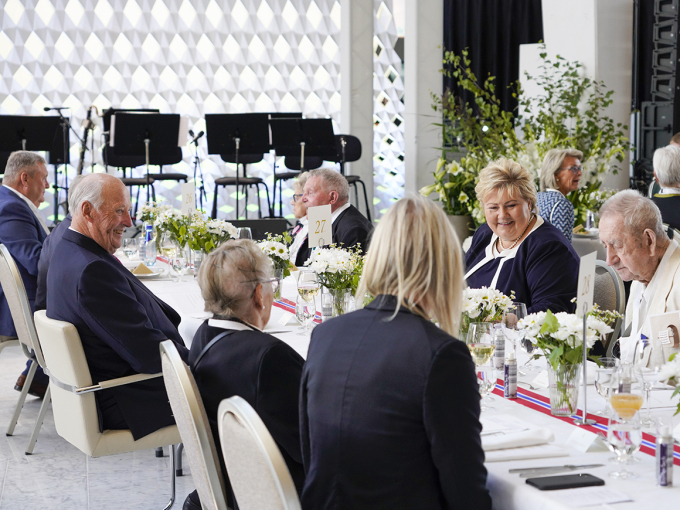 Crown Prince Haakon was seated between war sailor Torger Torgersen (98) from Solum in Grenland and Foreign Minister Ine Eriksen Søreide. Mr Torgersen was at sea during the entire war, and was on board the MT South America when the ship was struck by German torpedoes on 6 April, 1944, while sailing over the Atlantic from Halifax to Manchester. All 42 crew members were rescued.

Australian war sailor John A Gundersen (95) who now lives at Bekkestua in Bærum, war sailor Trygve Haavald Laheim (99) from Kvalsund, outside Hammerfest, and Otto Johan Borchgrevink from Oslo, who was imprisoned at Grini, also sat at the Crown Prince’s table.

Commander Mosberg served on board the KNM Svenner on D-Day, the invasion in Normandy on 6 June, 1944. The Svenner was hit amidships by two German torpedoes, broke in two, and sank almost immediately. Of the 230 crewmen on board 34 lost their lives – 32 Norwegian and two British seamen. The Commander served as adjutant for King Olav, both when he was Crown Prince and when he became King.

Commander Mosberg received the award Knight (Chevalier) the French Legion of Honour in February 2021 for his efforts on board the KNM Svenner in 1944.

As a child, Maria Gabrielsen lived in Vienna, where Jews were no longer welcome. Her father was a Jewish tailor. Her mother, who was German, fell in love with a member of the SS, and turned in her husband to the SS in order to have him deported to Auschwitz. She subsequently turned her own children in to the Gestapo.

The luncheon concluded with all participants singing the Norwegian national anthem, “Ja, vi elsker”, accompanied by the Staff Band of the Norwegian Armed Forces and the Norwegian Opera and Ballet children’s choir. 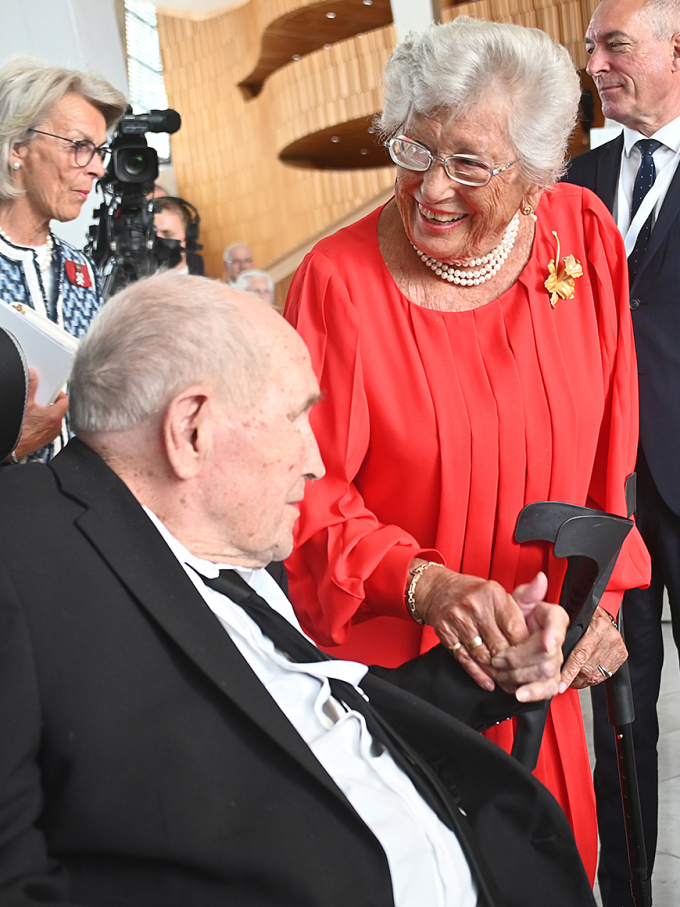