The Crown Prince at the UN

His Royal Highness Crown Prince Haakon began a four-day official visit to the US today. The main purpose of the visit is to expand international cooperation and further strengthen the excellent bilateral relations between the US and Norway.

Together with the Norwegian Minister of Foreign Affairs, Minister of Petroleum and Energy and Minister of Trade, the Crown Prince will be visiting the UN and meeting with US officials and members of the business community.

The UN is essential for Norway

“We live in a world where there is so much good, where we have succeeded in creating a good life for very many people, but there are still enormous global challenges that must be dealt with: pandemics, climate change, war and conflict, and displaced people. In order to come together and talk about these challenges and find solutions, we need a platform, and the UN provides that platform,” said the Crown Prince during a press conference in the Security Council Chamber.

“I have had the opportunity to work with the United Nations Development Programme for 17 years now. And when I travel to the field, one of the most vulnerable groups I meet, whose suffering is the most heart-breaking to witness, is children living in conflict. Norway is working to address this issue with a resolution on ensuring safe schools, also for children living in conflict,” said the Crown Prince. 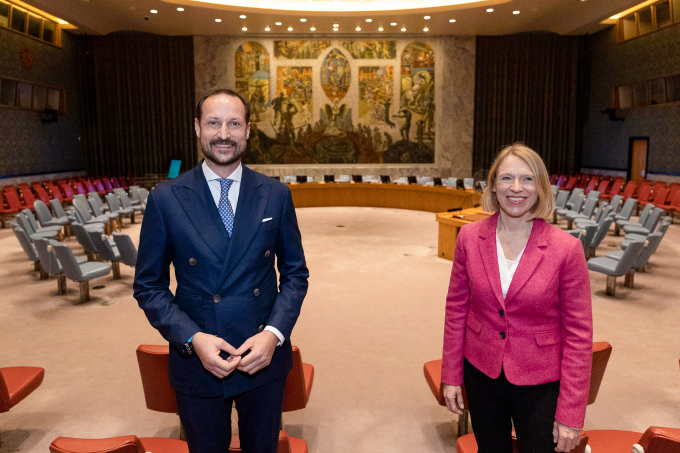 From the outset, Norway has viewed the UN as the most important forum for dealing with the major challenges facing the world. Crown Prince Haakon and Minister of Foreign Affairs Anniken Huitfeldt began the official visit to the US with a meeting with UN Secretary-General Antonio Guterres. Discussions during the meeting focused on the global challenges created by the pandemic and the climate crisis, and the fact that those who are poorest are, and will continue to be, hardest hit by these ongoing crises.

The Security Council is the primary meeting place in the UN for finding specific solutions in the effort to bring an end to war and conflict, and this year Norway began its two-year term as an elected member of this important forum. In January 2022, Norway will assume the presidency of the UN Security Council, and the Crown Prince and the Minister of Foreign Affairs spoke with the Secretary-General about the areas Norway will give special priority to: peace and security, protection of civilians living in conflict, rights of women and girls and climate action. 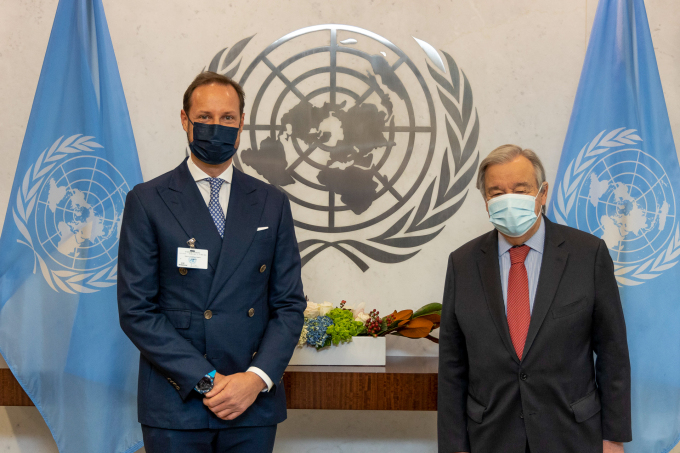 The Crown Prince and Minister of Foreign Affairs Anniken Huitfeldt started the official visit to the US with a meeting with UN Secretary-General Antonio Guterres. (Photo: Pontus Höök / Ministry of Foreign Affairs)

In July, Norway helped to ensure continued provision of cross-border emergency aid to Syria. This was the first resolution on Syria adopted unanimously in the Security Council since 2016. Recently, Norway was also successful in achieving the adoption of a resolution to protect education in conflict zones, supported by the Security Council as well as 99 other UN Member States.

The United Nations Development Programme (UNDP) plays a key role in helping developing countries to achieve the Sustainable Development Goals, such as eradicating poverty and ensuring universal access to health services. The COVID-19 pandemic has curbed progress towards reaching these goals, and the conversation between the Crown Prince and UNDP Administrator Achim Steiner on Monday revolved around the impacts of the pandemic on efforts to combat global poverty and promote better global health, and what Norway can do to help. 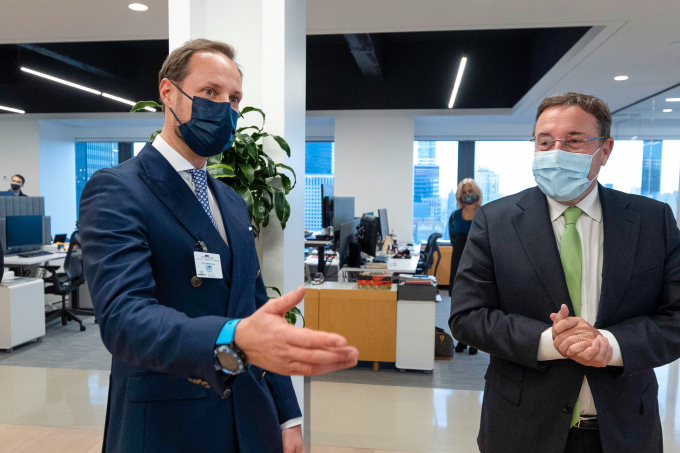 Medal for his service as a war sailor

In a formal gathering at the offices of the Royal Norwegian Consulate in New York City on Monday, the Crown Prince attended the ceremony in which Karl Aksel Andresen received the Defence Medal 1940–1945 for his service as a seaman in the Norwegian merchant navy during World War II. The medal is given in recognition of those who fought for Norway’s freedom during the war.

Mr Andresen sailed under the Norwegian Shipping and Trade Mission (Nortraship) 1940–1945, serving as a seaman and cook on board several Norwegian merchant ships, including M/S Skjelbred when the vessel was torpedoed by a German submarine in September 1943. Everyone on board survived. After the war, Mr Andresen settled in Brooklyn and raised a family. He is the last remaining seaman out of many hundreds who settled in post-war Brooklyn. Mr Andresen was president of the society for wartime sailors in Brooklyn until roughly 2010. 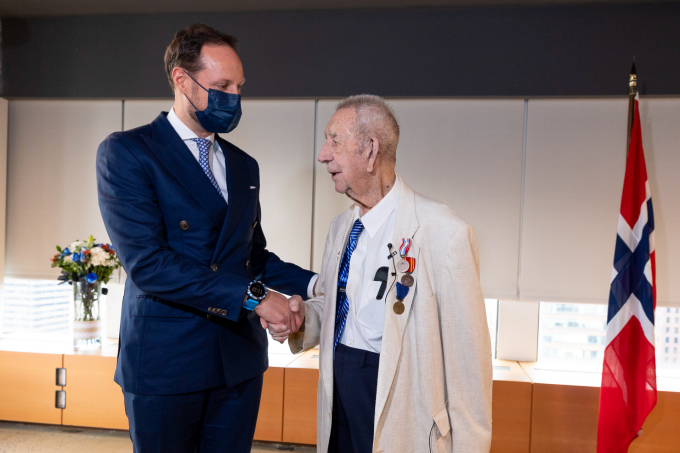 Protection of children and the right to education

One of Norway’s priority areas during its term as an elected member of the UN Security Council is the effort to strengthen protection of children in areas of conflict, and to safeguard the right of children and young people to education, even when they are living in areas affected by war and conflict. The Crown Prince gave the main address for Norway at the Security Council event, speaking of children’s right to education during conflict.

“Few things are more important for children and young people than safe access to education. This is particularly true in areas affected by conflict. The protective environment that schools and universities provide can be life-saving. And the knowledge and skills acquired there cannot be taken away. Their future depends on education. And our future depends on them,” said the Crown Prince in his speech during the meeting.

The cultural sector is an important part of the business sector, and later in the day, the Crown Prince and the Minister of Foreign Affairs met up-and-coming music managers from Music Norway’s one-year master’s programme, which is designed to facilitate recruitment of music industry professionals interested in working to promote music internationally.

The event was a workshop where the young industry talents could meet and learn from US music industry representatives. There were discussions in different groups on the topics of live music, media, management and A&R/artist development. The Crown Prince and the Minister of Foreign Affairs listened to and took part in the various discussions.

The last stop on Monday’s programme was a visit to the New Museum in Manhattan. Founded in 1977, the museum is an important venue for displaying contemporary art, with a focus on new artists from around the world. The museum has showcased 500 artists from 60 countries since it opened.

This autumn and winter, Norwegian-Congolese contemporary artist Sandra Mujinga is showing her works at the museum. Mujinga was born in 1989, and the museum has dedicated a special room to exhibit her video and sound installation. 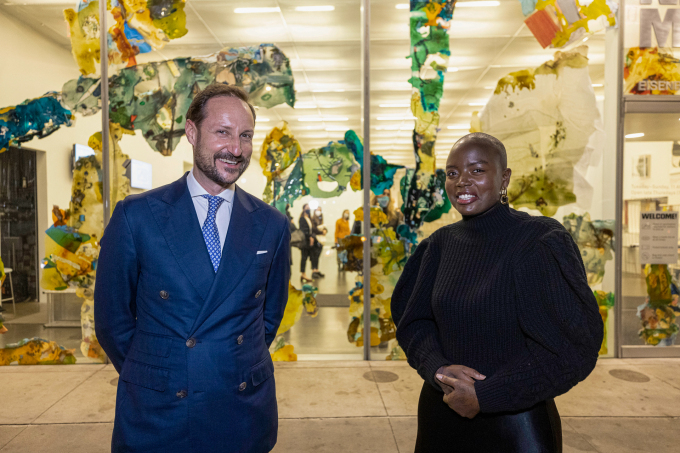