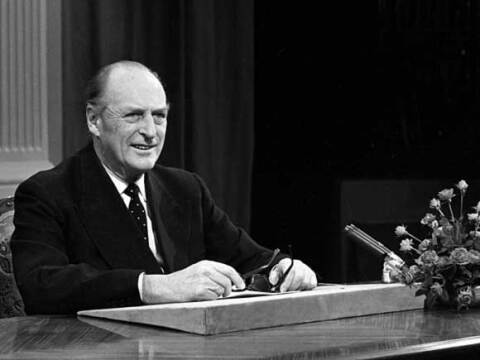 King Olav was born at Appleton House in Norfolk, England, on 2 July 1903. He was the son and only child of Prince Carl of Denmark and Princess Maud of Wales. He was two years old in 1905, when his father was elected King of Norway and Prince Alexander was given the name Olav.

In 1929 Crown Prince Olav married his cousin, Princess Märtha of Sweden. They had three children: Princess Ragnhild, Princess Astrid and Prince Harald (the future King Harald V), born in 1937. Crown Princess Märtha passed away 5 April 1954. She never became Queen, but the Bishop of Oslo described her position thus: ”For a long time she has been the queen of our hearts, and this position she will never loose".

Crown Prince Olav acceded to the Throne on 21 September 1957, when King Haakon passed away. He was consecrated for the performance of his royal duties in Nidaros Cathedral on 22 June 1958