For UNDP in Colombia

His Royal Highness The Crown Prince is in Colombia on behalf of the United Nations Development Programme (UNDP). “There is nothing more important for development than peace,” said the Crown Prince after his meeting with the President of Colombia.

In November 2016 the Colombian authorities signed a peace accord with FARC guerrillas, marking the end of 50 years of war with some 200 000 lives lost and over eight million victims. In 2017 the guerrillas laid down their weapons and the country could embark on the long road towards peace and reconciliation.

In his work as a UNDP Goodwill Ambassador, Crown Prince Haakon has dedicated particular focus to the UN Sustainable Development Goals, especially Goal 1: to end poverty. Lasting peace is a prerequisite for achieving this and many of the other UN SDGs.

The Crown Prince began the day with a breakfast meeting with Carlos Holmes Trujillo, Colombian Minister of Foreign Affairs. The two had an interesting conversation about the country’s development and the role of UNDP in Colombia. They also discussed relations between Norway and Colombia, and Norway’s support for the peace effort. As a former ambassador to Norway, Mr Trujillo is very knowledgeable about these issues. 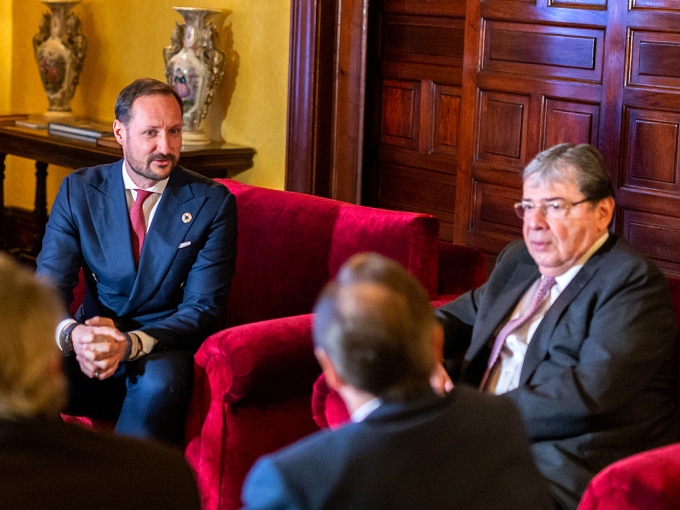 After his meeting, Crown Prince Haakon had the opportunity to walk through the beautiful, historic Candelaria district in the heart of Bogotá, on his way to the national museum, Fragmentos. 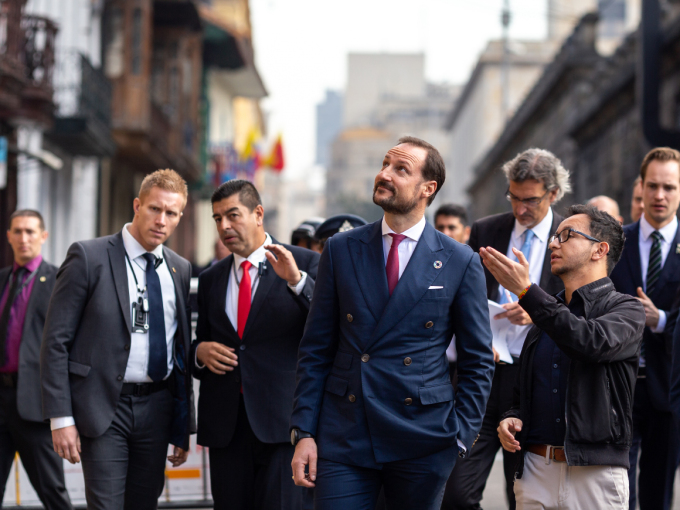 The next part of the programme took place at Fragmentos museum, where a floor of steel provides a moving monument to the war. Visual artist and sculptor Doris Salcedo together with women victims of the war melted down 37 tonnes of weapons from the FARC disarmament, creating 1 300 floor tiles that now cover 800 square metres of flooring, surrounded by ruins. 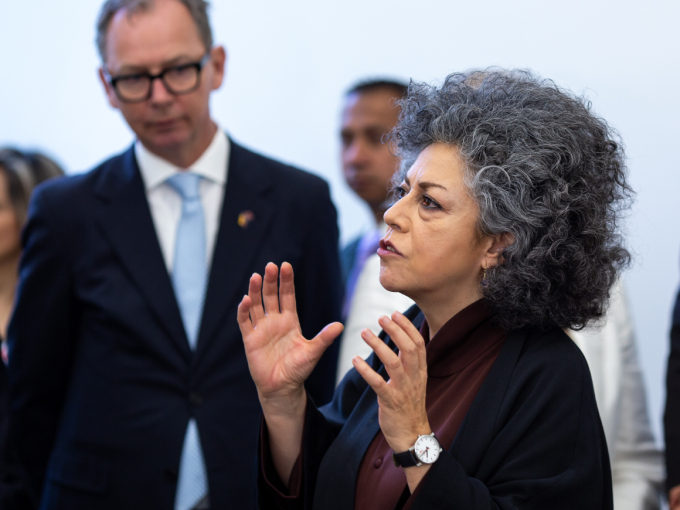 Next the Crown Prince had an emotional meeting with some of the victims of the lengthy conflict. Many people were displaced from their homes, forced to seek refuge, subjected to abuse, or lost loved ones. The uncertainty that many of these people live with is a constant hardship. They do not know what happened – their loved ones are among the Forced Disappeared. 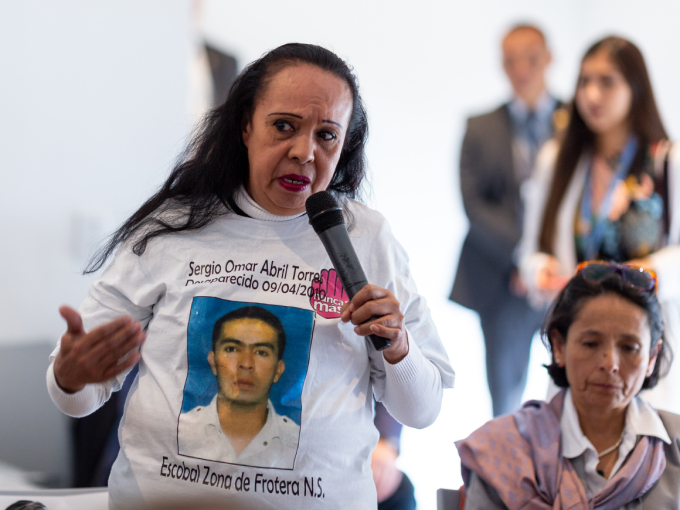 Ómar Abril Torres disappeared in April 2010. His mother Carmen now works for one of the organisations helping victims of the conflict. Photo: FN-sambandet / Eivind Oskarson

Also in attendance were the heads of the institutions working for justice for the victims – the Comprehensive System for Truth, Justice, Reparation and Non-Repetition. They are trying to uncover what happened, achieve reparations for the victims, and ensure that history does not repeat itself. Various groups affected are represented, and the System’s work is being followed closely far beyond Colombia’s borders. If successful, this model could be an example to be followed in the wake of conflicts all over the world. Obtaining justice for victims is vital to achieve a reconciliation that society can build upon to move forward. 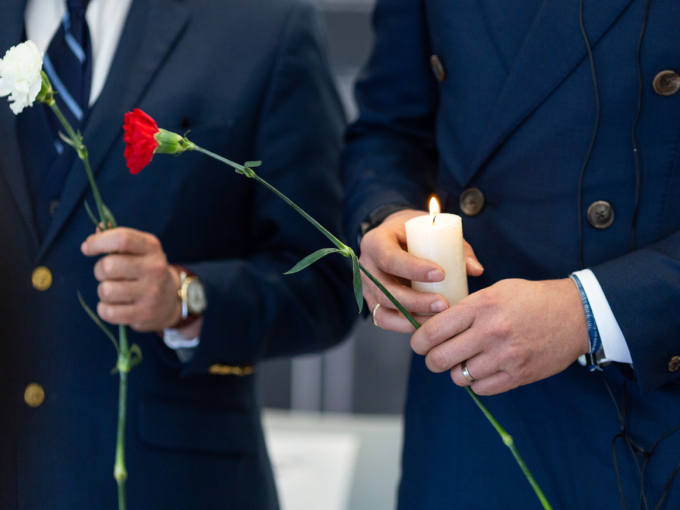 A ceremony with candles and flowers was held with some victims of the lengthy war in Colombia. Photo: FN-sambandet / Eivind Oskarson

Meeting with the President

Crown Prince Haakon met with the President of Colombia, His Excellency Iván Duque, in the President’s Palace. Norway and Colombia cooperate in a number of areas and Norway is an important partner in the battle against climate change and deforestation.

It was of great importance to express support for Colombia’s work towards peace and reconciliation and extend congratulations on the national development plan. 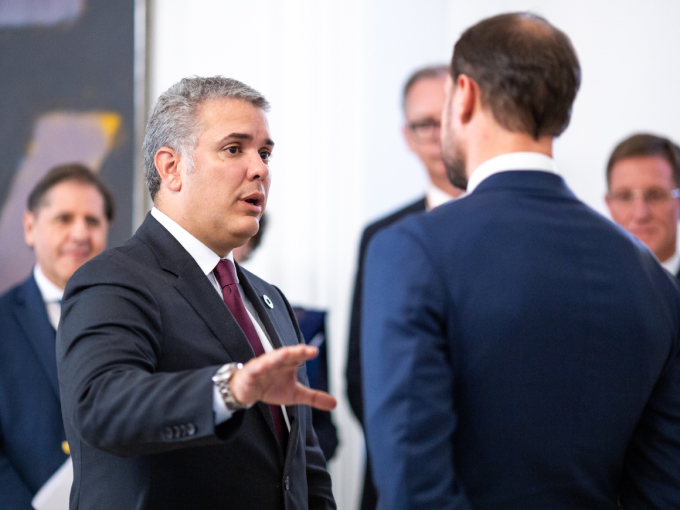 Crown Prince Haakon has been working with UNDP for over 15 years. In this time he has visited many countries and seen first-hand how much the UN can achieve in cooperation with national authorities.

In a statement after the meeting, the Crown Prince said, “If there is one thing I have learned, it is that there is nothing more important for development than peace. And that real development – inclusive, involving development – is crucial for lasting peace.”

“In this sense, Colombia’s experience stands out as a source of inspiration. You are demonstrating for us all that it is indeed possible to leave years of conflict behind and to move ahead towards peace. In doing so you are building a better future for the millions of Colombians who aspire to a better future for themselves and their families.”

The Crown Prince also had the opportunity to visit local UNDP staff. There he learned more about the important work they carry out and the many projects in which they are involved. 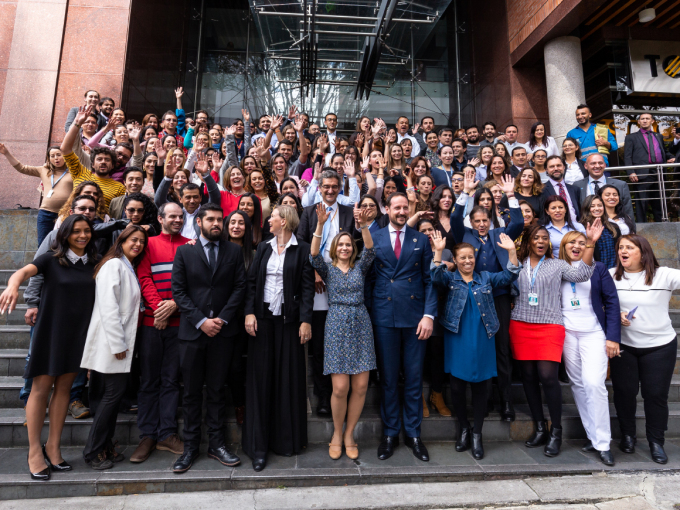 UNDP actively supports the peace effort and is involved in a number of projects that the Crown Prince will be visiting over the next few days.