After a day of travelling, Their Majesties The King and Queen have arrived in Punta Arenas, deep in the south of Chile. The port city is situated on the Strait of Magellan and is a departure point for expeditions to the Antarctic.

Punta Arenas is the southernmost city in the world with over 100,000 inhabitants. Before the Panama Canal was opened in 1914, it was the main port for those wishing to sail between the Pacific and the Atlantic oceans.

Punta Arenas is a base for expeditions to the Antarctic, and the first item on the King and Queen’s agenda as they visited the city was a seminar on Antarctica.

Knowledge about the Antarctic

Norway and Chile have common interests and history in the Antarctic. Today’s seminar addressed important issues such as climate change, sustainable management and environmental protection. King Harald opened the seminar. He noted that the ocean can provide food and energy for the world’s growing population – but only if its resources are managed in a sustainable way.

"The growing population of our planet will need more food, minerals, energy and medicines. The oceans could hold the answer to many of these challenges if we manage them sustainably."

Norwegian and Chilean researchers recently carried out a joint expedition on the research vessel Crown Prince Haakon. A film from the expedition was shown during the seminar. Their assignment was to map Antarctic Ocean krill stocks. The knowledge obtained from research in the Antarctic is important not only in managing the ocean’s resources, but also in enhancing scientific understanding of global climate change. 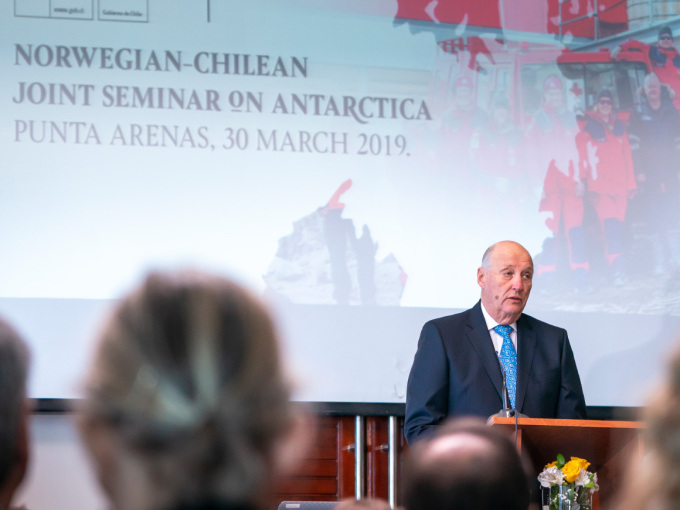 The Crown Prince Haakon, one of the world’s most advanced research vessels, was launched very recently. The ship is built to collect environmental data in the polar regions and contains highly advanced equipment, including 14 laboratories.

After the opening of the seminar, the King and Queen were officially welcomed to Punta Arenas with national songs and traditional singing and dancing. The ceremony took place in the city’s main square. Demonstrators protesting against Norwegian aquaculture were also present. 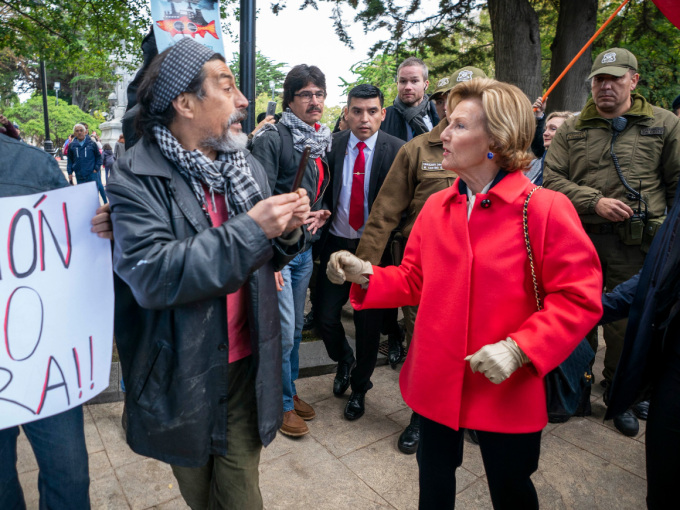 The welcoming ceremony took place near a large monument to the seafarer Ferdinand Magellan. Magellan was the first to sail from Europe to Asia through the strait which would later bear his name. Preparations are under way for a major commemorative celebration to mark this first sailing, which took place in 1520. 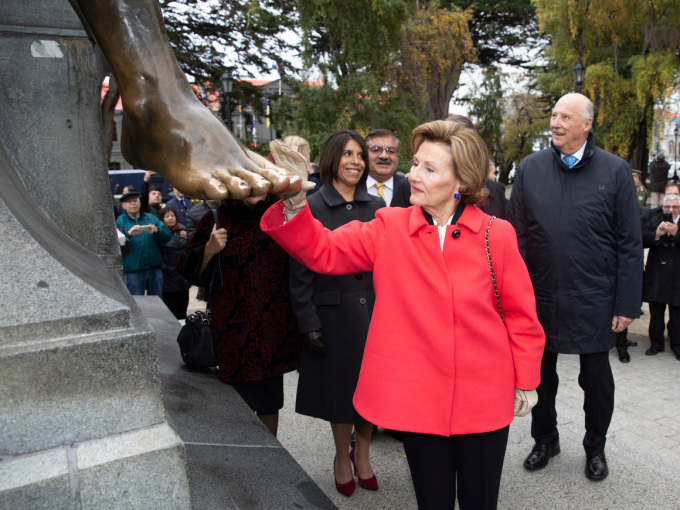 Visitors to Punta Arenas often stop to touch the toes of one of the figures on the Magellan statue... Photo: Tom Hansen, Hansenfoto.no

After the formal key presentation ceremony, the mayor took the King and Queen on a walk through Punta Arenas, stopping at Kiosko Roca, a colourful café that serves picados and other local specialities at its bar. The café has been a gathering spot for city residents since the 1950s. 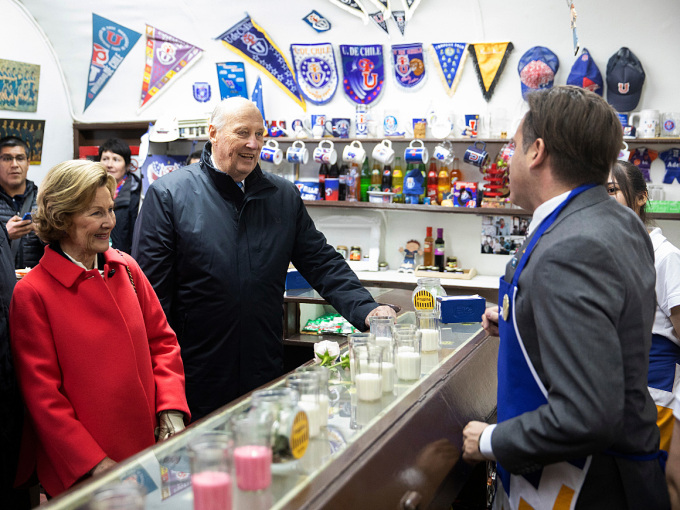 Satellites are important tools in Antarctic research. The Norwegian company Kongsberg Satellite Services (KSAT) is headquartered in Tromsø and has satellite stations at 21 sites around the world. One of those stations is in Punta Arenas, and the King and Queen visited it this afternoon. The satellite station was opened in 2017 by Norway’s Ambassador to Chile, Beate Stirø, and is strategically placed. It operates cooperatively with Troll, the Norwegian research station in Dronning Maud Land that is another major provider of Arctic knowledge.

The station in Puntas Arenas is expanding, and today the King and Queen visited one of the station’s five new antennas. Rolf Skatteboe, KSAT’s Chief Executive Officer, gave them a presentation of the station’s operations and the important north-south coordination that occurs – between Norway and Chile, the Antarctic and Svalbard. 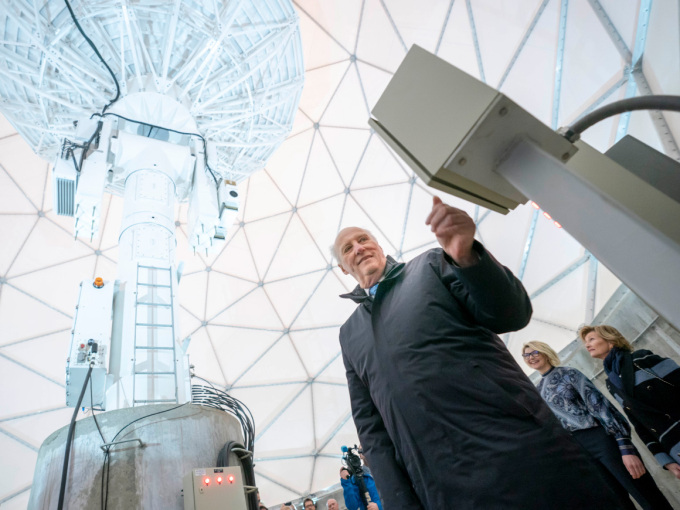 King Harald had the honour of officially opening the new antennas. The King and Queen also signed what will become a bronze plaque to be displayed at the site.

Boat trip in the Strait of Magellan

King Harald made it clear that he was impressed by the view of the Strait of Magellan. As a polar enthusiast and sailor, he has been particularly looking forward to visiting Punta Arenas. In the evening, the King and Queen had the opportunity to experience the Strait of Magellan from the deck of a catamaran. 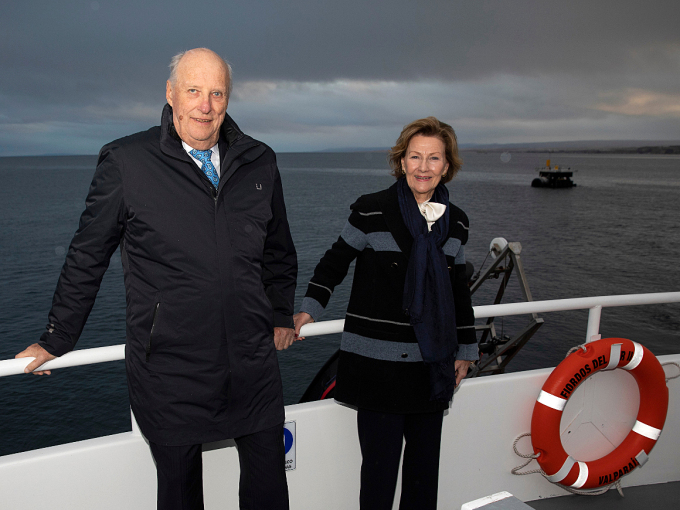 On the Strait of Magellan. Photo: Tom Hansen, Hansenfoto.no

The Strait of Magellan separates the South American mainland from Tierra del Fuego. The strait is difficult to navigate, but for a long period it was the safest route between the Pacific and the Atlantic for ships seeking to avoid rounding the stormy Cape Horn.

On Sunday King Harald and Queen Sonja will travel to Puerto Williams, the southernmost settlement in the world, where they will conclude their State Visit to Chile.