The nations of the world are currently gathered for a week of dialogue at the highest level. His Royal Highness The Crown Prince has a busy programme, as do Prime Minister Erna Solberg and the other representatives from Norway.

High-level Week opens the 74th session of the United Nations General Assembly and is the world’s most important political meeting place. Hundreds of meetings, conferences and other events large and small will take place in the next few days, with Norway participating in many of them.

The ocean, climate change, development and peace initiatives are all in focus for Norway. This is also the final High-level Week before next year’s UN Security Council election. Norway is a candidate for a Security Council seat, and it is important to highlight how Norway can contribute to the UN in such a role.

In light of the need to raise ambitions in the climate battle, the UN Secretary-General has invited national leaders to submit plans to increase their countries’ contributions under the Paris Agreement.

From the podium, the Secretary-General asked countries to contribute to the Green Climate Fund – a request Norway is already fulfilling Starting in 2020, Norway will double its contribution to the fund that finances climate measures in developing countries.

Among those addressing the General Assembly was Prime Minister Erna Solberg, who spoke on the potential role of nature itself as a factor in the climate struggle.

The Swedish climate activist Greta Thunberg was also invited to deliver remarks during the climate summit. She expressed herself unequivocally, saying that today’s young people and future generations will hold world leaders accountable if they do not arrive at effective solutions quickly.

UNGC is a global network of companies seeking to support sound and sustainable practices. More than 9,500 companies from 160 countries have joined the network, making it the world’s largest corporate social responsibility initiative. All companies that join the network commit to abide by 10 principles pertaining to human rights, the environment and anti-corruption efforts.

UNGC is a global network of companies seeking to support sound and sustainable practices. Photo: UNGC.

Effective, sustainable ocean management is fundamental to combating the major challenges the world faces. The ocean is an important factor in fighting climate change and a major source of energy and food – but it is threatened by pollution and overuse. Achieving the UN Sustainable Development Goals will require striking a balance between the protection and utilisation of ocean-based resources, and business and industry have a key role to play.

"The UN Global Compact and its Action Platform for Sustainable Ocean Business has done an impressive job agreeing on the nine principles launched here today," Crown Prince Haakon said. "The more than 300 stakeholders who have been part of this process worldwide are demonstrating by example and serve as an inspiration in our joint efforts to keep our ocean clean, healthy and productive."

In addition to attending the Climate Action Summit and launching of the Sustainable Ocean Principles, Crown Prince Haakon took active part in a gathering on alleviating the suffering of children in war and conflict at which Nobel Peace Prize laureate Nadia Murad delivered the keynote address.

The Crown Prince also spoke at a luncheon for Nordic and Caribbean foreign ministers at the Norwegian residence in New York. On matters of climate and ocean resource management, Norway shares many interests with the small island states of the Caribbean and hopes for Caribbean support during the vote on Security Council membership.

Crown Prince Haakon concluded his programme for the day at a network meeting arranged by the World Wildlife Fund. 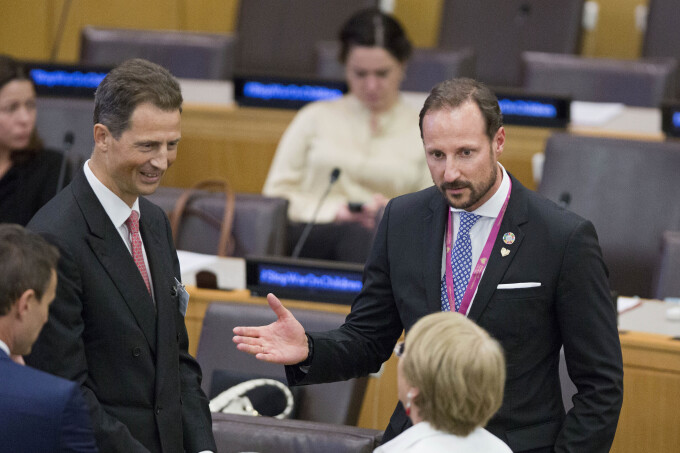 The Crown Prince has a busy programme in New York this week, here with conversation with Hereditary Prince Alois, of Liechtenstein. Photo: Pontus Höök / NTB Scanpix

Among the Crown Prince’s activities tomorrow will be the Sustainable Development Goals Summit and Norway’s main event of the week – The Ocean Wave.