The visit marks 50 years of diplomatic relations between Norway and Jordan, as of 2019, and 25 years since Norway established its embassy in Amman. In addition, it has been 20 years since King Abdullah and Queen Rania paid a state visit to Norway.

Minister of Foreign Affairs Ine Eriksen Søreide and Minister of Trade and Industry Iselin Nybø are accompanying the King and Queen during the state visit. 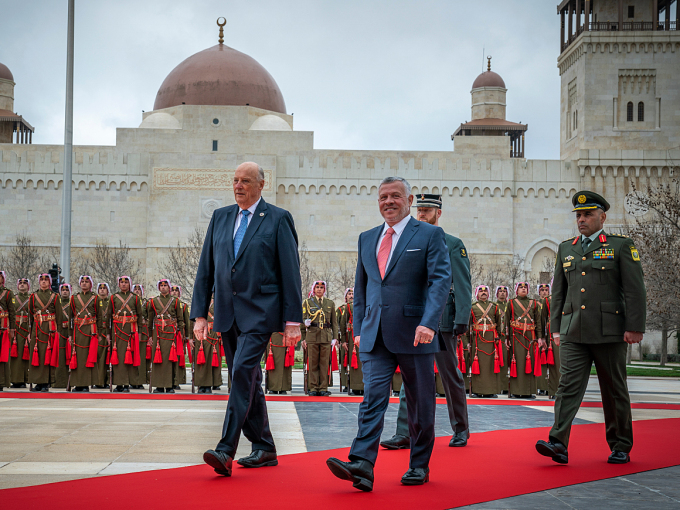 At the end of the welcoming ceremony, King Abdullah, Queen Rania, King Harald and Queen Sonja moved into the palace for an official exchange of gifts and talks. King Harald was also in attendance during the discussions held later between the Norwegian and Jordanian delegations. 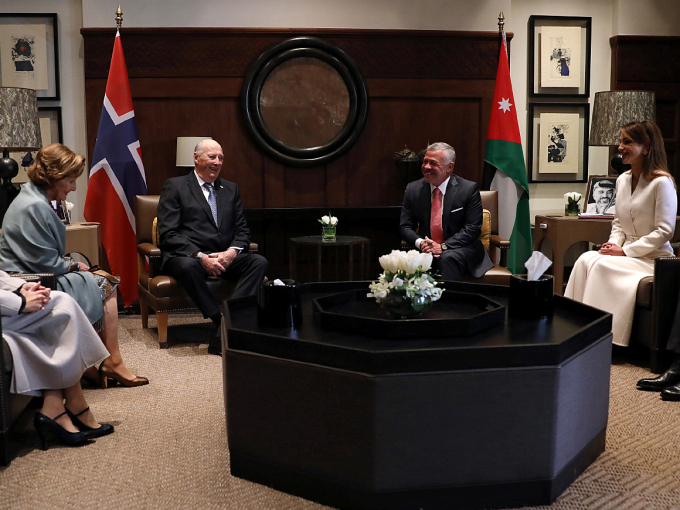 One topic of discussion was the extraordinary generosity Jordan has shown to refugees from Syria and other countries in the region. Jordan also has a large Palestinian population. To assist in these efforts, Norway provides humanitarian support to Jordan with a special focus on educational support to help the many refugee children to receive schooling.

Seafood on the table

Trade between Norway and Jordan has been relatively modest, but exports of Norwegian seafood have increased in volume in recent years and Norwegian producers see the Middle East as an important part of their effort to enter new markets. Minister of Trade and Industry Iselin Nybø hosted some 120 guests today at a seafood luncheon where representatives of Norwegian producers and exporters met Jordanian importers, grocery chain operators and hoteliers.

Norwegian chef Sebastian Myhre was responsible for preparing the meal and also conducted a workshop on Norwegian raw ingredients for Jordanian culinary students on Sunday.

This afternoon Queen Sonja spoke at the opening of a business and trade seminar exploring promising areas of cooperation between Jordan and Norway. 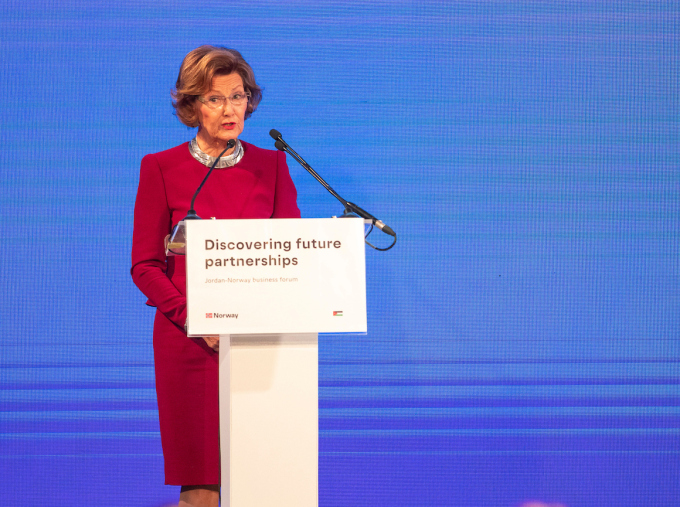 Queen Sonja gave a speech at the opening of the seminar. Photo: Tom Hansen, Hansenfoto.no

Companies linked to energy production and distribution are well represented in Norway’s delegation. They met with representatives of Jordan, as the country is seeking to boost renewable energy investment and has especially good prospects for solar energy development.

For another group of participants, the focus was cancer research. The Oslo Cancer Cluster and the King Hussein Cancer Foundation met to discuss collaboration on clinical studies and cancer treatment.

For tourists, Jordan offers a range of wonderful destinations, including the ancient city of Petra and other sites on UNESCO’s World Heritage List. A number of Norwegian tour operators took part in today’s event to discuss sustainable tourism. 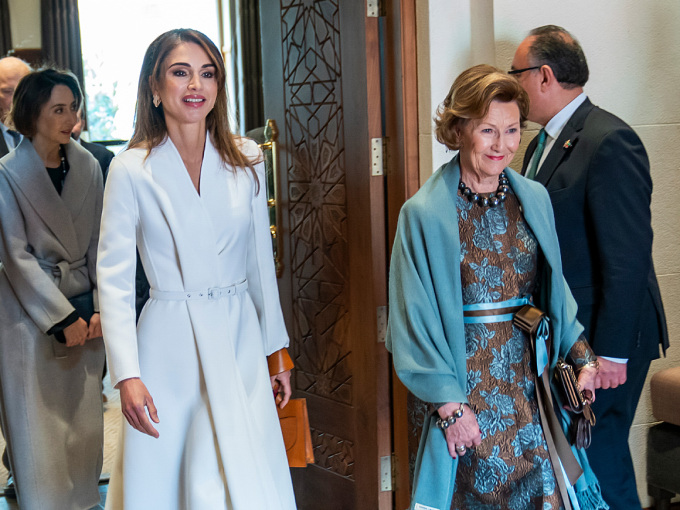 A separate, secondary seminar took a closer look at greater freedom and participation in the workforce for women – a subject close to Queen Sonja’s heart. She noted that the participation of women as well as men in the workplace has been crucial to economic growth and development of the Norwegian welfare state: “Women’s participation in working life has had a greater impact on Norway’s economy than our oil and gas revenues — together.”

"Women’s participation in working life has had a greater impact on Norway’s economy than our oil and gas revenues — together."

“Norway supports these initiatives,” said the Queen, expressing the hope that Norway can inspire additional efforts by sharing its own experience in the area.

"Gender equality is not only a human right. It is also smart economics! Talents are distributed equally among men and women. Therefore, opportunities should be equal, too.

Jordanian women are highly educated but often stay home after marrying. The authorities in Jordan seek to increase the level of participation by women in economic life.

This evening, King Harald and Queen Sonja are the guests of the Jordanian King and Queen at an official banquet in Amman. 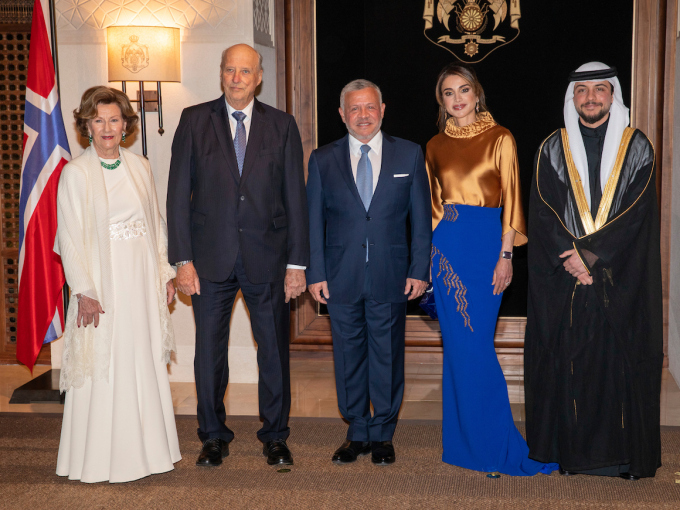 This evening King Abdullah and Queen Rania are hosting a banquet in honour of the state visit. Photo: Tom Hansen, Hansenfoto.no

The state visit will continue tomorrow, with integration and interreligious dialogue as important areas of focus. 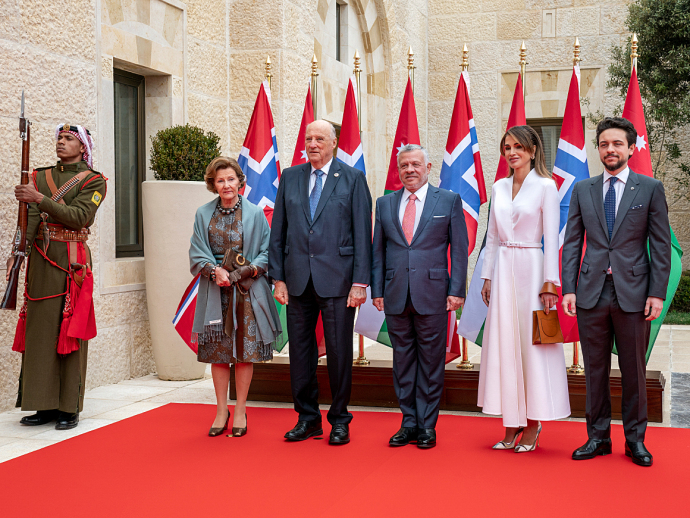