Refugee integration and interreligious cooperation were important areas of focus today for Their Majesties The King and Queen. King Harald praised Jordan’s efforts to promote dialogue and cooperation.

Jordan hosts a vast number of refugees, many of them from Syria, and has pledged to provide all children in the country with educational services. Some 134 000 Syrian children attend school in Jordan. Norway assists financially in this effort and also supports two projects administered by the Norwegian Football Federation (NFF), whose goal is to use sports to encourage integration among children.

Thirty kilometres west of Amman, in the city of Salt, is the Nusaibah bint Ka’ab girls’ school. Many schools in Jordan are run in double shifts, with Jordanian children going to school in the morning and the classrooms filling up again in the afternoon – this time with children from Syria. But at Nusaibah bint Ka’ab, the Jordanian and Syrian children attend together. It is also one of the schools with a football pitch built under the NFF project.

Today, the school received a visit from King Harald and Queen Sonja.

The King and Queen greet Jordanian and Syrian girls on the football pitch in Salt. Photo: Tom Hansen, Hansenfoto.no

The King and Queen learned about the steps Jordan takes to integrate the school’s many Syrian children and the cooperation between the Norwegian and Jordanian football federations. Football is not only a means of integration – with Syrian and Jordanian children playing and enjoying themselves together – but also a way to advance gender equality. The idea is use football to boost girls’ and women’s participation in society.

Jordan and King Abdullah II play a special custodial role in respect of sacred Christian and Muslim sites in Jerusalem, while Jordan itself is home to important holy places including the Baptism Site of Jesus. King Harald and Queen Sonja visited the site today, accompanied by the Jordanian King and Queen and Prince Ghazi bin Muhammad.

The Queen outside the of grotto John the Baptist . Photo: Heiko Junge, NTB scanpix

The location near the bank of the Jordan River is considered to be where John the Baptist baptised Christ. It is of course key to the Christian tradition of baptism and has been an important pilgrimage site for 2 000 years.

King Harald himself was baptised with water from the Jordan River in keeping with the tradition for the Norwegian Royal Family.

King Harald and Queen Sonja also had an opportunity to visit the Evangelical Lutheran Church in Bethany. It is one of seven churches for different denominations built after His Majesty King Abdullah dedicated the area for the purpose.

The King and Queen were given a presentation on the dialogue between Muslim and Christian leaders. Photo: Heiko Junge, NTB scanpix

King Harald and Queen Sonja were given an introduction to the collaboration and dialogue between Christian and Muslim leaders and listened as representatives of different faiths read texts from the Bible and the Koran.

The church is decorated with nine paintings by Håkon Gullvåg, and the Norwegian artist himself was present today to explain his works. Naturally, the central motif of the altarpiece is the baptismal scene. 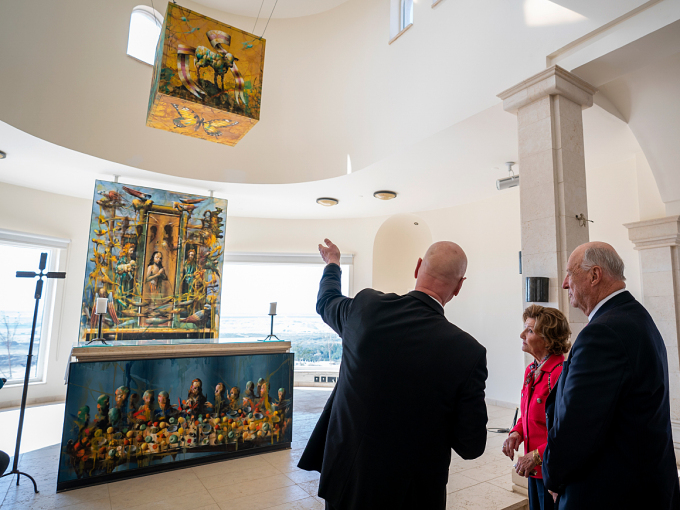 The area where the churches stand today was deeply affected by warfare between Israel and its neighbouring countries. A legacy of the conflict was more than 6 500 landmines scattered around the area. Norwegian People’s Aid assisted in mine clearance efforts, and in 2012 Crown Prince Haakon took part in the ceremony declaring Jordan mine free. The Evangelical Lutheran Church was built in 2013.

From the church, one can look across the Jordan River and see Jericho in the West Bank and – on a clear day – Jerusalem. A major proportion of Jordan’s population is of Palestinian origin, and the Palestinian-Israeli conflict has had a major impact on the country.

Norway and Jordan are both strongly committed to multilateral cooperation to solve the many challenges the world faces.

This afternoon King Harald attended the conclusion of the seminar “Preserving Spaces for Dialogue”. Arranged by the Peace Research Institute Oslo and Jordan’s Center for Strategic Studies, the seminar addressed the potential roles of Norway and Jordan and opportunities for collaboration.

The King addressed seminar participants and praised Jordan’s efforts to promote dialogue and cooperation. He specifically highlighted Jordan’s acceptance of a large number of refugees, its creation of forums on economic cooperation and development and its attempts to find solutions to regional conflicts.

This evening King Harald and Queen Sonja are hosting a Norwegian-Jordanian friendship dinner that will bring together representatives of political, administrative, business, research, cultural and non-governmental arenas.

The state visit concludes tomorrow with a visit to the renowned ancient city of Petra.